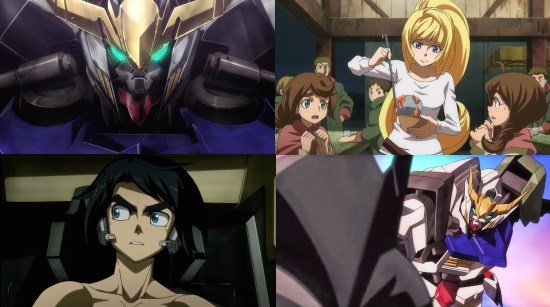 When a show comes out with a name like Iron-Blooded Orphans, it’s a fair bet that you aren’t going to be watching a slice of life show about kittens (although thinking about it why hasn’t that show been made yet?) When you add the words Mobile Suit Gundam into the mix then expectations are going to ramp up even further. We’re a year on now from the last ‘serious’ entry into the Gundam universe, which is almost enough time for us all to forget the abysmal Recognista in G and move on, although fan expectations are going to be mixed here when you recall that the last serious Gundam that was even vaguely good - Gundam 00 - was six years ago. This new show's going to have to pull out all the stops to show that the franchise can be more than an excuse for the hugely expensive Origin OVAs to keep bringing in the cash.

300 years after a war for independence between Earth and its colonies on Mars, the people of Mars are still working to secure their independence. Princess Kudelia of Mars has plans for a bloodless end to the conflict and intends to travel to Earth to settle matters once and for all. Unfortunately, the Earth military has caught onto her plans and decide that all things being considered they rather like being in charge, and so decide that it’s open season on Martian princesses. With John Carter nowhere to be found it’s up to private military organisation CGS - comprised largely of a group of orphaned children raised as child soldiers - to try and make sure Kudelia can make it to Earth alive. Good thing they have an old Gundam lying around in the basement...

As far as plots go there’s clearly a lot to work with here, especially once you look past the fact that the main storyline could have been ripped straight from Aldnoah Zero. In the past Gundam has never been afraid to toy around with heavy subject matter, and the ethics of raising child soldiers is certainly a big topic, so it’s a real shame to see it done so ham-fistedly. Despite the young cast constantly mentioning how bad things are and in spite of how cartoonishly the ‘bad adults’ act (seriously, the people in charge of CGS wouldn’t be out of place as Scooby Doo villains) there’s never much of a sense that there’s actually anything wrong bar a few shots of kids laying landmines and one or two punches. Most of the time half of them are re-enacting the opening scenes of Gunbuster, apparently having the time of their lives - one of them has two sisters who appear free to come and go as they please, and the second they get a chance for freedom they unanimously decide that child-soldiering is the way to go and form their own mercenary group. Errrrrm......

With this aspect of the plot not working there’s not too much else to go on story-wise, as the characters are so dull and thinly drawn that you can’t latch on to them either. Kudelia is an off-the-peg anime princess Stereotype number 6; Orga is the bog-standard antagonistic male and lead character Minazuki manages to have even less of a personality than Aldnoah Zero’s Inaho (get this kid a robot eye stat). There's also a fat kid called Biscuit, because why wouldn’t we go back to the kind of awful character naming we had in the 80s? These issues are compounded by the character designs - This is Yu Ito’s first show working in this field and he has utterly borked it, with characters that range from bland (Kudelia) to garbage (Biscuit) to those that make you wonder if he copied them from other shows (Orga). Minazuki again is the worst offender, with no features at all save for two colossal square eyes which the animators never even seem to bother having blink. Even Recognista in G had better design and that show looked like it’d been drawn by Picasso on acid!

It’s also worth noting that the Gundam franchise's apparently hateful 1970s attitude towards women seems to not only be present but even worse than it’s been for years. The female characters get essentially nothing to do aside from housework - including our (supposedly) strong-willed brave princess, who within two episodes is doing the cooking for the boys and waiting around to be told what to do. At one stage she asks to use the Gundam to fight (and this is a franchise that desperately needs more strong female characters piloting its mecha) and is essentially told that fighting is for the boys so why don’t you go stand over there and not worry your pretty little head about it (okay, so the show gives a reason about this being an operation that might not work, blah blah blah, but the intent is very clear). Rather than appeal to its female fans through giving them a strong role model to get behind, the show is instead seemingly targeting the fujoshi crowd by having all the kids pilot the mechs shirtless. Why shirtless? Well there doesn’t seem to be any good reason for this, so your guess is as good as mine.

Fortunately there is a sole redeeming feature for the series, and fortunately for a Gundam show it’s the big one – the action sequences themselves are brilliant fun and well animated, with everything looking much more vibrant and fluid than it has any right to given the rest of the show.  The new main Gundam, the Barbatos, in particular looks fantastic and is by far the best designed Gundam since the Freedom all the way back in Gundam Seed. It’s a huge hulking mech with a much more rounded design than most lead mechs are allowed in the Gundam franchise, and it eschews (for now at least) the traditional beam sword and rifle for a massive lance which makes for a great look and some really fun battles.

Overall however, this series is not showing any signs of the spark that used to make the franchise sparkle. Like Age and Reconguista in G before it, this is nothing but a lifeless chunk of animation that appears thrown together in haste to have some Gundam out there for those who can’t afford the price of Origin, which appears to be where all the real talent, time and funds are going. Although its only three episodes in, this is not a show that looks set to give you any reward for your time.

You can currently watch Mobile Suit Gundam: Iron-Blooded Orphans in streaming form on DAISUKI and Crunchyroll.