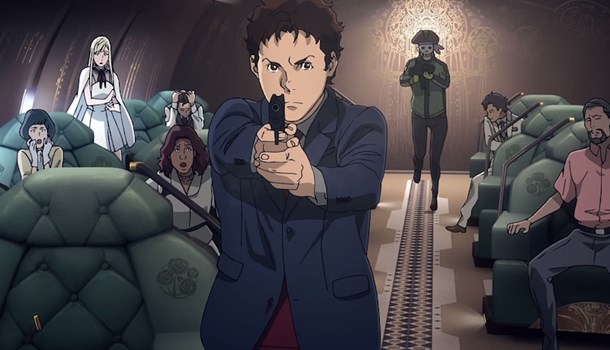 It is Universal Century 105 and twelve years have passed since Char’s Second Neo-Zeon War. Hathaway Noa, son of Earth Federation commander Bright Noa, finds himself at a crossroads returning to Earth on a diplomatic shuttle filled with Federation dignitaries when the ship is boarded by masked hijackers led by an individual claiming to be Mafty Navue Erin, leader of the dissident group Mafty. There is only one problem with this scenario – Hathaway IS Mafty Navue Erin…..

I’m torn on Mobile Suit Gundam: Hathaway (formerly Hathaway’s Flash in Japan). On the one hand it is undoubtably a stunning piece of mecha animation that features crisp animation, some excellent music, and a story ripped straight from the mind of Gundam overmind Yoshiyuki Tomino, based as this is on his novel trilogy of the same name published in 1989-1990, filled with ruminations on the Haves vs the Have-Not’s and what amounts to the gentrification of Earth by way of forced relocation of the less well-off to the space colonies. Mecha combat with a dose of political thriller if you like. Special shout out to the mid-film battle between Mafty & Earth Federation mobile suits (the less than svelte Messer & Gustav Karl – chonky bois for the win), which is shown almost entirely from the perspective of Hathaway and Gigi on the streets as they flee their hotel. It’s shockingly effective at getting across just how terrifying being caught between combat between even a bunch of “grunt” suits would be for the average person. I got real vibes of The 08th MS Team from that.

On the other hand however this is not what I would consider an entry point into the Mobile Suit Gundam universe. I’d say if you have not seen at least Chars Counter Attack and either the original Mobile Suit Gundam or it’s compilation movies, there is going to be a lot of context that will go over your head as it drops you straight into the action, and context is kinda crucial to understanding Hathaway’s arc and how he has ended up at the point he has when we first meet him here. It doesn’t help that this is the first of a planned trilogy where production has only just begun on the second part, so narratively it leaves a lot of plates spinning with no real resolution.

A side effect of this is that Gigi & Kenneth – ostensibly the other two main characters of this film - come across as somewhat underdeveloped. Gigi shows signs of being a much more interesting character, with a seemingly intuitive ability to see through falsehoods, but is pigeonholed as simple arm-candy. The focus on her looks is evident from th eopening where passengers seem enthralled by her, and through the incredibly forced romantic triangle between herself, Noa & Kenneth. And speaking of Kenneth, at the moment he remains a somewhat stereotypical Federation officer, with swagger to spare and a suspicion he’s not quite as together as he makes out. This in turns spills over into the supporting cast of Noa’s Mafty recruits and Kenneth’s subordinates , many of whom look distinctive but we don’t spend enough time with them. Honestly I wonder if this might have benefitted from the same OVA treatment as Unicorn, just to give events time to breathe. Equally I can appreciate Bandai wanting to make adapting Tomino’s novels a capital-E-event, and the box office receipts have backed up that strategy.

One thing I cannot criticise though is Netflix’s English dub, and the speed with which they brought Hathaway to international audiences given it’s (long-delayed) Japanese theatrical release was only June 11. With the streaming giant recently announcing their production of a live-action Gundam film, as well as expanding their Gundam streaming offerings beyond just Iron Blooded Orphans and Unicorn to include the (genuinely quite good) trio of films that compressed the original Mobile Suit Gundam series, as well as Chars Counter-Attack (more or less divisive than End of Evangelion? – discuss), I consider this a fantastic sign that Netflix have confidence in the Gundam franchise and intend to broaden awareness of it. A commercial decision to be sure, but one I can get behind if it leads to the likes of Stardust Memory, Thunderbolt, War in the Pocket and The 08th MS Team showing up on the service and coming to the attention of a wider audience.

Now for all my criticism this is the first part of a planned trilogy, so would be more than happy to reappraise it once parts 2 & 3 are out, but for the moment I have to look at it in it’s own right and, sadly, I feel that whilst this feature will “click” with fans of Gundam who have a familiarity with the Universal Century, newer fans will likely be left in the cold.

6
A gorgeous but somewhat cold experience that suffers from being part 1 of 3 – add 2 points if you have a familiarity with the franchise.