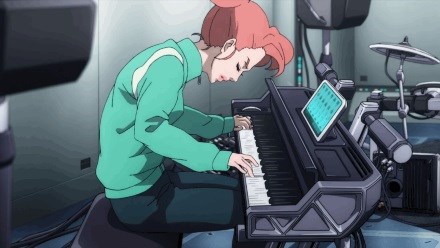 Ah the old adapt-a-series-into-a-compilation-film trick eh? Its long been one of the most frustrating things an anime production companies can do, because the things are pretty much pointless (one cannot imagine that there is all that much of a fresh audience for these things) and because people who’ve seen the original keep buying them!

When you get right down to it even the best of these things aren’t all that good compared to the series that spawned them because of the key fact that they’re trying to tell a story designed to be told in 4-8 hours in just 90 minutes. Today’s example is at least exempt from the worst of this as Mobile Suit GUNDAM Thunderbolt: Bandit Flower is only adapting four 15-20 minute episodes, so if nothing else you do get the whole thing in one purchase, but is the end result really worth it?

Bandit Flower is a continuation of the previous series (or December Sky if you watch that particular compilation), here we find our… well, not heroes really but protagonists certainly, still engaged in the Federation-Zeon war (for background to the conflict please see about 1000 episodes of other GUNDAM series and a small library sized section of Wikipedia), this time seeing both sides engaged on a second front with the South Seas Alliance, which utilises brainwashed Buddhist cultist mech warriors as soldiers (I’m not making any of that up, honest!). Io teams up with gun-cannon pilot Bianca who, fortunately for the show’s soundtrack, also turns out to be a fellow Jazz lover whilst the cybernetically-augmented Daryl err….spends some time at the beach. Oh, and then going to look for a Zeon informant behind enemy lines.

If this all sounds a bit muddled, that's because it is. You'll likely be un-surprised to learn that this film has some pretty big issues in the plot and pacing department. There isn’t enough time allocated to any of the plot threads for an audience to really grab onto, not helped by tantalising ideas that would benefit from some plot-threading are frustratingly apparent but never explored.

For what it’s worth it is the Zeon plot-line that comes off worse here as no-one seems to be doing anything. Daryl spends time at the beach then goes to see an old friend who is having a very anime case of ‘trauma regressing them back to childhood’. Even when he does finally get out onto a mission it doesn't seem to be in any way involved in anything happening in the rest of the film and is pretty perfunctory.

The Federation prove to have a more engaging storyline, with new character Bianca proving to be a lot of fun. Unfortunately the plot suffers both from constant cutting back to the uninspired Zeon story and a big case of ‘GUNDAM vs female characters syndrome’. This is where any strong, empowered female character is relegated to spending the majority of the big final battle on the sidelines. In this case, she's driving a flying paving slab for the hero to stand on. Oh dear. At least she hasn’t been killed off in a messy fashion, but there’s always room for that in the sequel I suppose.

Technically at least Bandit Flower does stand out as it looks great. Featuring strong, clean character designs and some fantastic animation (though admittedly some of the mecha designs do look a bit like someone covered a GUNPLA model torso with glue and stuck it in a box of random bits). The action is fast and frantic, albeit a little less visceral than I tend to expect from GUNDAM. Its a lot of fun to watch these mechs pound away on each other with a variety of weaponry ranging from the absurd to the near-copyright infringing. Director Ko Matsuo may be usually be credited as a storyboard artist on other works, but he certainly proves he can direct an action scene here!

On the sound front both the dub and sub prove to be pretty good so you can be happy with whichever version you select. The score does prove to be a little disappointing however, not quite measuring up to the spectacular soundtrack of the first Thunderbolt release. All the necessary parts are present here but they never quite seem to gel as well as they need to.

What you’re left with here, oddly enough, feels like a compilation film that was assembled from more than just 4 episodes. The end result is just very unsatisfying on a story and character level and only really serves to provide a few solid action sequences that deserved a more coherent and engaging narrative on which to hang themselves. This is probably only something for the die-hard GUNDAM fan.

5
This is exactly what you'd expect from a compilation movie.