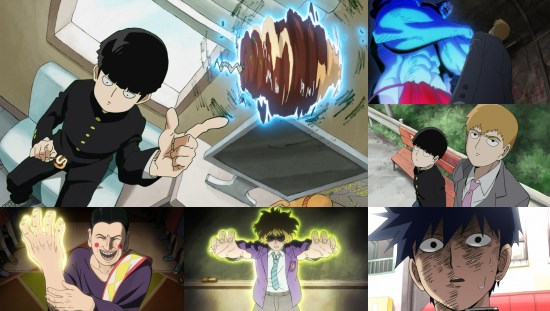 If you've listened to our podcast or heard me discuss it in any other context, you'll know that I'm not a big fan of One-Punch Man - sure, I can see its appeal and what it's trying to do, but to my mind its core premise actively works against it and makes the whole thing boring. After all, shounen anime series work incredibly hard to give some semblance of frailty to their heroes for the very reason that an unbeatable protagonist is dull, and while playing with that convention sounds fun in practice the execution in One-Punch Man's case left me cold.

With that in mind, I wasn't expecting too much of Mob Psycho 100, another anime adaptation based on a manga from the same author - ONE - only this time featuring a powerful esper as its protagonist. In fact, in all honesty I wasn't planning to watch the series at all, but my interested was piqued as social media exploded around the series and I felt compelled to "join the conversation". My plan was simple - watch an episode, get a grasp of what all the fuss is about, then file it neatly in the box labeled "Not for me, thanks". Yet, here I am six episodes into the series and with a compulsion to write about it... and just look at that number down at the bottom of the review too. Look at it!

As I just mentioned, Mob Psycho 100 is the story of an incredibly powerful esper, and much like One-Punch Man's Saitama he doesn't see his powers as a big deal or a life-changing state of affairs. In fact, powers aside Mob (or Kageyama, to use his real name) is a rather plain, directionless and ordinary middle-school kid who would normally blend into the background and be unnoticed at school or in the street. He has at least found an outlet for his powers however, finding himself an after-school job in the employ of an ace psychic named Reigen who runs an agency offering services in dealing with the supernatural. Not that Reigen is actually psychic - he is in fact an A-grade con artist, albeit one who's oddly admirable in his willingness to wade into danger rather than let his mask slip, although even when it does seem like the game could be up for Reigen his student is still blind to the truth, such is his inability to read people and their intentions.

If Mob Psycho 100 was simply a series which followed Reigen and Mob around solving supernatural problems it would probably be pretty entertaining in its own right, but there's actually far more to the show than that - indeed, Mob and Reigen's adventures serve mostly as an introduction to this world filled with the paranormal, existing from that point forth to provide some additional comedy or give some further flavour to whatever is troubling Mob at the time.

Now I mention it, being troubled is the name of Mob Psycho 100's game. Mob himself is deperate to fit in, become popular and enjoy a more fulfilling life, completely oblivious to the jealousy others harbour towards his powers (and indeed their bafflement that he doesn't use those powers to become popular). At its heart, every major character in this series wants to be something that they're not - Mob wants to be popular, his brother wants to be an esper, Reigen is hiding his lack of ability behind bravado and a silver tongue, and so on. This gives the show some real depth beyond its basic action-comedy that is decidedly pleasing - you can certainly enjoy this series at face value, but there is also a smattering of juicy character-centric fare to dip into should you choose to look beyond the surface.

Not that you'll find yourself needing to dig too deep to find any entertainment here - once its laid out its world and characters, the show quickly finds a rich vein of comedy from its characters and their circumstances to provide lots of giggles and laugh out loud moments in the midst of its story. In comparison to One-Punch Man, that story is decidedly low-key, eschewing world-ending scenarios for far more localised events caused by a single person acting up, while Mob himself oversees these events as a ticking time bomb of sorts; a fact which the viewer is occasionally reminded of by an on-screen overlay keeping tabs on his status and how close he is to exploding into a pure ball of angst-fuelled, esper powered rage which is entirely beyond his control.

Even setting those moments where Mob goes psycho aside, the series to which he lends his name is a fantastic visual tour de force of kinetic, energetic and varied animation. Certainly, its character design work is weak (to the point where 90% of the cast look like One-Punch Man's Saitama in cosplay), but in a way that arguably aids the kind of loose, fluid animation the series employs which enters the stratosphere when things kick off. It might not be able to match the intensity of One-Punch Man at its best (the animation work on that series was the sole reason I stuck with it from beginning to end), but it's stunning in its own unique way and BONES have done a tremendous job of creating one of the year's most visually striking series from its eye-catching opening credits onwards.

Carefully weld all of those elements together, and you're left with a tremendous series so far - its visuals won't appeal to everyone but they are perfectly suited to their purpose here, while the characters and their situations are entertaining, engaging, and perhaps most importantly easy to relate to once you step away from the whole ESP angle of the show. Mob Psycho 100 isn't just about bewilderingly super-powered action, it's a show with heart and a deft eye for characterisation, and it's for that reason I keep on coming back for more.

You can currently watch Mob Psycho 100 in streaming form on Crunchyroll.