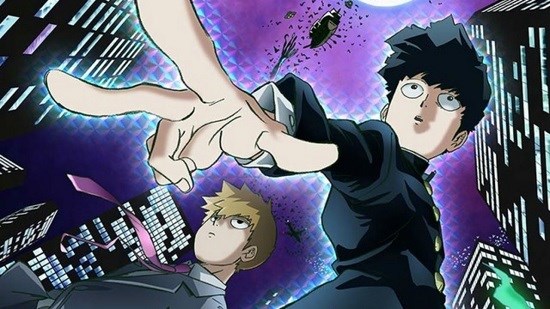 You ever have a show that you hear great things about but never got around to watching? We all do. Those shows that just pass us by, that our friends won’t stop talking about but we just haven’t made the time to check out. There is a lot of anime out there and only a limited amount of time to dedicate to it, especially if, like me, you’re busy with your third play-through of Persona 5 (I don’t have a problem and I can stop any time I want....).

For some of you, Mob Psycho 100 might have been that show. It didn’t get the massive fanfare that some shows have gotten and, when it came out in 2016, it was easy to miss if you weren’t careful - this was the same year that My Hero Academia burst onto the anime scene, after all. However, with the next season of Mob Psycho 100 set to hit us in just a matter of weeks as well as the impending release of the DVD/ Blu-Ray combo next week, now is the perfect time to dive into this quirky, funny, and surprisingly endearing show for the first time or to give this wonderfully stylised anime that all important second watch.

Mob Psycho 100 takes place in a world where both psychics and spirits exist and are at least marginally accepted as real by the general public. Eighth-grader Mob is one of those possessing psychic powers, though his powers are far beyond those of most people. He avoids using them, stifling his emotions so that he doesn’t explode in a psychic rage that is capable of levelling cities when his stress levels reach “100”. Mob tries mundane methods of both becoming popular and winning the heart of his secret crush, but his frail body and general blandness reduce him to a mere background character in most people’s lives.

Serving as mentor and employer for Mob is Reigen, who, unlike his young protégée, possesses precisely no psychic power. Instead, he relies first on his own ability to read, manipulate, and generally scam members of the public to run his exorcism business. When those skills, or his all important massage skills, don’t do the trick, he calls in Mob to handle the actual business of fighting the demons and spirits that haunt the world. Though he lacks any actual power as a psychic, Reigan insists that Mob is his sidekick and often takes credit for the young boy’s achievements and victories.

These two, along with Mob’s younger brother who begins the series without powers of his own and is, unlike his brother, both handsome and popular, lead a cast of colourful characters through the events of the series, which is both embraces the tropes of the genre and subverts them in equal measure.

Probably the first thing you’ll notice about the show is that it has a striking art style. It would be easy to look at the blank expressions on Mob’s face and say that it was lazy or simple, but, much like One Punch Man (also by the mangaka known as One), the simple style belies the remarkable animation of the show. Every scene is a visual delight, switching from simple style to frantic psychic action at any moment. When Mob finally reaches his limit and his full power cuts loose, studio Bones pulls out all the stops to create a psychedelic feast for the eyes.

Like any good anime about a young man coming into his own power, one of the key roles in his life is filled by his mentor Reigen. It is important to note that Reigen is a charlatan and a con artist, lying to everyone around him in order to profit off their suffering. He is absolutely using the Mob, paying him just 300 yen (a measly £2.10) per hour for coming in and doing the hard work for him. It would be easy to hate him just for this, but excellent writing and a fantastic performance in the dub by Christopher Niosi save the character and make him one of the most likable characters in the show.

Reigan, for all his flaws, truly cares for Mob and wants to see him use his powers for good and, more importantly, to be happy. When his ward is in danger, he throws himself into the fray despite knowing full well that he is out classed and out of his depth. It is actually one of the sweetest moments in the show and it makes the case for Reigen being one of the best mentors in anime.

The first season consists of twelve episodes, which is fairly short as far as anime’s go. It ends precisely when you’re hoping for just that little bit more, so it is easy to see why fans have been clamoring for a second season since the first one dropped in 2016. Between top tier visuals, an excellent cast of characters supporting an intentionally uninteresting protagonist, and some genuinely laugh out loud humour to enjoy, make sure you get caught up ahead of the new season hitting the internet on January 7th.

9
The perfect show to binge over the holiday season