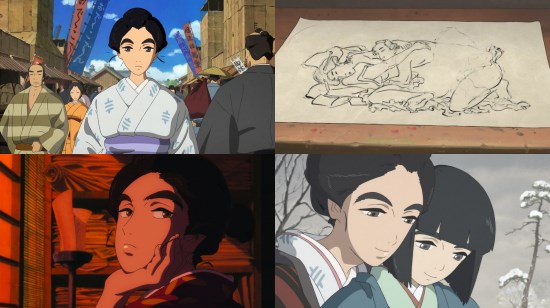 Even if the name of Hokusai isn't one that's instantly recognisable to you, chances are you'll recognise at least one of his works on sight - "The Great Wave off Kanagawa" has become an iconic piece of Japanese artwork that has come to represent not just the ukiyo-e style but the country as a whole. Dig a little deeper and you'll find a wide-range of highly respected works from this late Edo period artist, be they flowers, depictions of Mount Fuji or erotic in their nature. As the title to this new film from Production I.G might suggest, Hokusai had a daughter, and it is she who is the subject of this film from Colorful director Keiichi Hara, adapted from two volume manga Surusuberi.

In this story, grounded in historical materials but still ultimately a fictional tale, the daughter in question - O-Ei - also happens to be a proficient artist in her own right, albeit one who acts more as an assistant to her father Tetsuzo (aka Hokusai as we know him) while trying to grapple with the world around her so as to find her own style and "voice" within her art.

This is told not as a single, cohesive narrative throughout the film, but rather as a series of short stories and vignettes within which certain themes permeate. The clearest through line across the story is also actually an almost entirely anime original one, as O-Ei interacts with her younger sister O-Nao, who was born blind and thus has a troubled relationship with her father for whom the visual world is everything.

Away from O-Nao, the film dedicates itself to giving us as broad a flavour of Edo and its particular era as possible - we roam the streets, engage in drinks and banter, hear the latest gossip from around the city, enter brothels and so on. At times, these stories also have a strangely supernatural bent which crops up here and there to lend a little otherworldly flavour to proceedings.

It's actually hard to put together a review that talks about Miss Hokusai as a single entity as, to be quite frank, it isn't. The structure of the film and its series of vignettes that are often unrelated to one another makes it more like a stitched together version of a weekly TV anime at times - sometimes good, sometimes forgettable, occasionally simply stunning.

Surprisingly, it's actually that anime original content surrounding O-Nao that shows Miss Hokusai at its best. The way this blind character is utilised really shows off the sumptuous animation and sound direction of the film, taking in a busy bridge where O-Nao loves to soak in the sounds and smells in lieu of sight, and a trip out in the silence of a snowy day that provokes unexpected and unbridled joy for this little girl. It's also this character who effectively provokes the emotional denouement of the film, for it is her life that punctuates the important moments of O-Ei's, ultimately leading to that "discovery" within her art that she's been searching for.

The rest of the film is far more of a mixed bag - those supernatural moments we mentioned sit uneasily within a film that seems dedicated towards making this historical period feel real to the viewer, and other vignettes meander without any central purpose to speak of and are quickly forgotten. Thankfully, the good outweighs the bad here overall, largely thanks to O-Ei herself as she is quickly established as a well-rounded character - independent and not afraid to speak her mind, yet still doting on her sister and easily flustered when things from outside of her life experiences thus far encroach into her life. It's easy to see why this film is about her rather than Hokusai himself - although the great man gets some wonderful moments in the spotlight, it is O-Ei's star which shines the brightest and powers the film along.

We may have just compared the structure of Miss Hokusai to a short TV anime just now, but one area where it certainly doesn't deserve that comparison is in terms of its animation quality. Miss Hokusai is a boundlessly beautiful film - its representation of Edo is bustling, detailed and simply gorgeous, it easily shifts between art styles in places to ape some of the period's art, and some of its animation cuts are amongst the best you'll ever see. In particular, one elongated shot of O-Ei running is jaw-dropping in its execution - as it should be, given that it took a single animator three whole months to complete!

Having mentioned the expert sound direction, we do however have to question the film's use of a rock soundtrack to bookend the movie and crop up elsewhere - you might want to call it a brave new take on the period, but frankly it's jarring and only serves to pull you out of the painstakingly created period setting painted before you. Thankfully these moments where rock music disturbs your enjoyment of the film are rare, but when they crop up they're certainly notable.

As we've mentioned, Miss Hokusai is a difficult film to tackle as a whole - it isn't strictly the story of Hokusai's daughter or her work, but more of a love letter to Edo and the period within which the movie is set. To quote the film itself it's the story of a "simple but enjoyable life" that doesn't dwell on its drama and emotional pain, seemingly espousing the idea that life goes on even if those things that cause us pain remain pivotal in shaping and inspiring us.

If you're looking to dig deep into the story of Hokusai's art and his daughter's influence and work within it (many of Hokusai's works are, it is argued, attributable to his daughter), then you'll probably feel that Miss Hokusai is too light a film that doesn't show sufficient interest in the art that defined an era. Similarly, if you're hungry for intense period drama, then this is not a film that wants to wring every last drop of blood and tears from such moments and may also leave you disappointed.

However, if you're enamoured of the idea of simply spending some time wallowing in the beauty of life and the surroundings of this period and setting, then this is the film for you - it has the visuals, the characters and the everyday stories of a life well-lived to bring Edo to life, and in this regard it is largely phenomenal. It would be reductive to call it a simple but enjoyable film given the craft involved, but Miss Hokusai's easy nature can both frustrate and delight - thankfully, in our book it does more of the latter.

Miss Hokusai was screened in Glasgow and Edinburgh as part of Scotland Loves Anime 2015. It will be released on UK home video by Anime Limited in 2016.

7
A film of beautifully crafted visuals and sound, but one that perhaps suffers for the want of a more traditional narrative structure.
LATEST REVIEWS