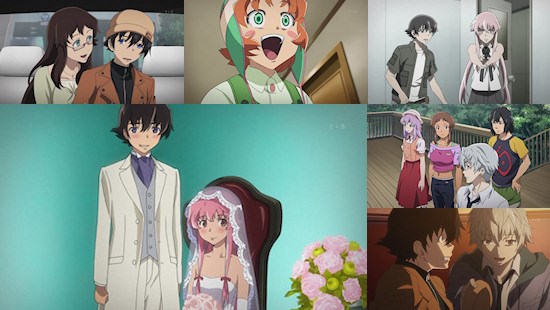 I'm not sure anything I could have said in my review of its first few episodes will have fully conveyed the lunacy that is Mirai Nikki (or Future Diary, to give it an English title) - what else can you say about a series that has a major character named Deus Ex Machina amongst its ranks?  Not that this should give the impression that Mirai Nikki is a bad show - far from it, its insanity is one to be welcome and luxuriated in rather than greeted with raised eyebrows and tutting.

If you had any suspicions that the series was throwing out its craziest goings-on and set pieces as an opening gambit to draw in viewers before settling down into something more mundane, then the remainder of the show's first half disproves this utterly - if anything, it ramps up the madness, and before we know it we're presented with murderous toddlers, evils brainwashed cults and mechanical killer dogs.  It's the kind of list of plot points you might make in jest as a spoof of an extreme, violent anime, but somehow Mirai Nikki makes such concepts stick as genuine story elements without you batting an eyelid.

It's difficult to really put a finger on why the show's outlandish story works - its premise, twists and turns frequently descend into the ludicrous but without becoming farcical, walking the tightrope between taking itself seriously and depicting the story with a knowing wink that whispers "this is pretty crazy and stupid, huh?" without falling into the pit of stupidity that constantly threatens to engulf all within its yawning blackness.  Ostensibly, I suspect Mirai Nikki works because of the strength of its story-telling and presentation - its frequent plot twists to delve us further into insanity are almost always deliciously laid out for the viewer, a feast of intelligent writing coupled with a sufficiently fast pace to stop us from thinking too hard about what we're seeing and any holes within its plot.  The show's roster of characters are similarly strong - every individual can shift from being friendly to hostile as their own needs demand, leaving you constantly second guessing as to who, if anyone, can be trusted.  When your major "heroine" is an axe-wielding, psychopathic stalker with literal skeletons in her closet, you know you're watching something a little bit special.

This leaves us with a viewing experience that is akin to a weekly trip on a roller coaster as the owners of the show's various "Future Diaries" slice, dice and try to outwit one another to become the new god of time - all, that is, aside from our protagonist Yukiteru who continues to worry more about how he's going to make it through the next five minutes over anything quite so grandiose.  Its animation might not be particularly slick (it's functional, nothing more), but this does little to take the sheen off the enjoyable nature of watching proceedings unfold, helped along by a great little soundtrack and a wonderful portrayal of bonkers beauty Gasai Yuno as she goes about her often grisly business while also posing as the main focus of any occasional bouts of fan service the series decides to offer.

Mirai Nikki certainly won't impress everybody with its reliance on blood, guts and moments of tittilation in the midst of his mayhem, but the fact that it manages to create a world of over the top blood-soaked peril matched with smart writing and story-telling means that it gets all of the plaudits that it deserves from us - it's almost impossible to watch an episode without laughing with glee, shouting out your surprise or simply gawping at the screen from time to time.  At this half-way point, it shows no sign of running out of steam either - here is a show that still clearly has plenty more surprises up its sleeve, and we really can't wait to see them.

8
More manic, malevolent mayhem from Mirai Nikki - and we love every second of its delicious slice of smartly plotted insanity.
LATEST REVIEWS