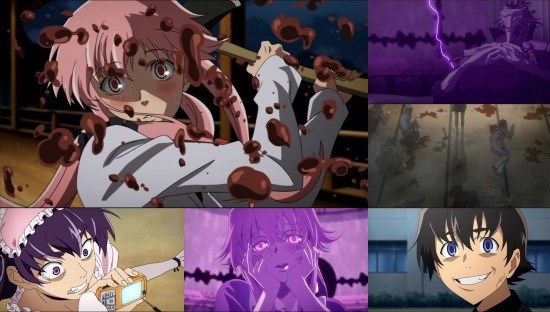 Wouldn't it be great to be able to predict the future? That way you could be able to plan your life accordingly and live with an advantage over everyone else. For Yukiteru Amano he gets more than he bargained for when the God of the Universe, Deus ex Machina, grants him a so-called "future diary" - a device capable of seeing into his future which is conveniently stored on his mobile phone. After making good use of his diary's precognitive abilities, Yukiteru gets noticed by a girl in his class as another diary user. Pinning Yukiteru as the first diary user, the girl in question Yuno Gasai, identifies herself as the second user. After a run in with yet another user, Deus ex Machina reveals to Yukiteru and eleven other future diary users that they have all been entered into a survival game where the winner and sole survivor will win the honour and prize of becoming the next God of the Universe. Thus, Yukiteru and Yuno enter into a complicated alliance in order to prevent their 'DEAD END'.

From the outset, Future Diary presents itself as a rather edgy yet comical series in both tone and execution. The main plot begins with the rather dark premise of having twelve people fight for survival yet puts whimsical flourishes on the whole thing with regards to its supplementary material and execution. For the most part the series deals with rather brutal circumstances and themes revolving around cults, murder, terrorism and even rape, yet in contrast to this it also throws comical moments into its sub plots and back stories. Each episode has a small sketch section which shows how each member of the survival game got their diary, within which the series utilises a few interesting jokes that break the forth wall by commenting on the absurdity of the plot and how eccentric each character is.

It's this aspect that really sets Future Diary apart from shows of a similar ilk. Each character has their own motives, agenda and plans, and whilst Yukiteru and Yuno mainly fight to survive they are also in a fight which ends with the death of another diary user. The instigator of each scenario is presented as really aggressive and calculating in several different ways, while each character is also really eccentric and over the top. Each character's diary acts differently from the next, meaning that characters also have to make use of their diaries strengths or take advantage of the weakness of their opponent's diary, which really adds a layer of tension in the episodes. Finally, there are also some mystery elements in the series, main revolving around Yuno, her obsessive desire to protect Yukiteru and her peculiar family situation. Whilst most characters are eccentric and over the top, Yuno steals the show with how quickly she changes from cute and charming to calculating and murderous. When Yuno gets in the right frame of mind the action in the series really kicks up a notch too, making these scenes really fun to watch.

While there are is a lot of action and comedy here, Future Diary does dabble in it's fair share of social issues. As mentioned earlier cults, terrorism, murder and rape make appearances, all of which are tackled heavy-handedly at times. Given the tone the series goes for it broadly works though, pushing the tone and seriousness of these moments in ways which really contrast with the lighter comedic moments that in turn lead to some shocking moments that really hit the mark - a reminder that the situation the characters are in is completely messed, up not only due to the survival game in progress but thanks to the nature of the cast too. No-one in the series is completely good or evil, with characters doing dubious things but for noble goals. The best part of this utilisation of the cast's shades of grey is that characters realise their actions are wrong but see them as necessary means to achieve their goals. This also has an effect on the character's relationships in the show, making for another facet that is fun to watch.

With regards to the series presentation, the discs have been authored by Kazé, which presents us with the issue of sign subtitles only showing up in full when the signed track is selected - if you've opted for the main English subtitle track alongside the original Japanese audio sign subtitles seldom show, only when revealing themselves when characters are not talking. This poses a real annoyance in a series revolving around characters reading diaries packed with on-screen text all the time. To get the full picture of what each diary's text says you're going to have to watch the English dub. although as the characters read the most vital elements of these diary entries out loud you may lose a bit of superulous information but get the vital details.

This problem aside, the subtitles are fine and have no issues thankfully. With regards to the English dub for the series, it might not be the best effort from Funimation's stable but it's rather decent. There are a few issues with admittedly -  mainly the addition of a lot more swearing, American and slang terms, although the dialogue and voice acting makes some characters sound older than they should be. Considering that Future Diarycan be seen as a dark and edgy show, it seems like Funimation have produced a dub that they thought would complement it well, and whilst there's not really a problem with this, some of the language really feels out of character and feels like it was thrown in to make it seem like a cooler show than it is. If you don't mind a bit of unnecessary mild swearing though, then the dub of the show is still pretty watchable.

Future Diary's first half sets up its survival game rather well, establishing a dark yet whimsical world filled with eccentric characters in over-the-top situations. The result is a dark, brutal yet fun thrill ride of a show.

8
A fun thrill ride of a show that deals with dark, mature themes but still manages to be comical.