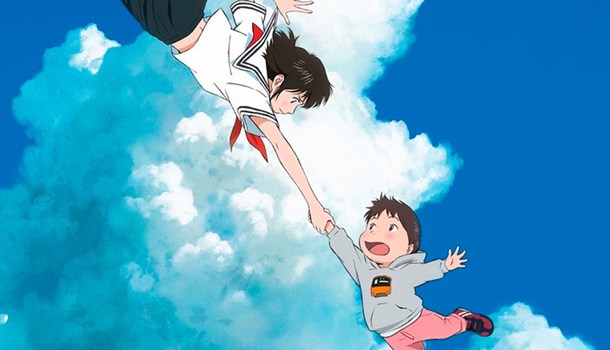 When asked how I felt about being an father I found myself stating a proud “Yes! I want to be a father”. If I ask some of my friends and colleagues, they would proudly state “No! Hell no!”. Others might say maybe, but more often than not, the decision is a binary one. It is also the same with Marmite, that horrible yeasty concoction which some among us like to spread on toast.

I mention this binary decision, because this is what seems to have happened with opinions of Mirai, Mamoru Hasoda’s newest film after Boy and the Beast was released onto home video a few years ago. His newest creation, another story written from his own personal experiences has thoroughly split the viewers at Scotland Loves Anime 2018. While there were many of us who felt like we had been dragged backwards with all of our heart strings plucked, others found themselves either disliking the film or in some cases, actively hating it.

To set the record straight, I absolutely adored this movie and my reasoning for this is below. So, before I start rabbiting on, lets give you a brief synopsis!

Mirai is the story which is set within a young family. The father is a freelance architect, working from home, while the mother seems to be a high-up sales person who has to frequently work away from home a lot. This couple have set themselves up in a weird home which they have designed themselves (and if you ask me it is completely unsuitable for a young family, but what does an engineer like me know, right?) and they have the cutest little puppy. This couple finds themselves pregnant with a little boy, Kun, and they establish their loving relationship, which normally revolves around Kun’s obsessive love of trains until the newest member of the family, Mirai arrives.

Mirai is your typical newborn and her effect on this family is also typical. Like every young child she needs feeding every three hours, she sleeps, poops, vomits and cries and she consumes the full attention of her devoting parents. This does not sit well with Kun or the puppy who, until now, had enjoyed their fair share of the love. With divided attention comes jealousy and Kun begins to show more and more disruptive and aggressive behaviour because, he is a four year old who doesn’t know how to cope with the situation. His parents do the best they can with him. His father stays at home and cares for Mirai and Kun, but as he is also freelance, he needs to keep working. Their mother also has to work her day job and while grandparents help, there is just not enough attention to go around. Kun begins to hate his newborn sister more and more.

Thankfully for Kun, he is saved, thanks to an intervention by his sister. Not this cute baby in the cot, but rather her as her teenage self, aged approximately fourteen. Through these rather elaborate dream sequences which occur in the small garden in the house, Mirai shows Kun about their family’s history, she talks to him and helps guide him into being a better brother, and also helps rescue him when he becomes lost in his own jealousy, guiding him back to his loving family. Mirai teaches him to love his sister and become a better brother and helps develop him into being less of a loud and angry little jerk. And yes, while he is only four, Kun is being a right little jerk for most of this film, and judging from the snapshot of the 18 year old Kun, while he does get better, I think he remains a jerk to be honest.

Mirai attempts something which I don’t recall having ever been done before. It tries to get you to empathise with a main protagonist who can’t really talk, and who is a toddler. While I am not sure that this actually works, I did however find myself emotionally connecting with those around Kun. His father, who works at home and tries to find the smallest morsel of concentration in a chaotic world.  His mother, who wants to be at home with her family, but instead works long hours and travels. His sister, who is trying her hardest to not be a needy baby, but literally can’t help it because she IS a needy newborn baby. In fact, I think everyone is making an effort, except for Kun. But, that is generally how toddlers work!

Like the other Mamoru Hasoda films which we love, such as  Wolf Children and Summer Wars, the story is centered around a family and strong character development. While not much happens in Mirai compared to the previous examples, there is enough scope thanks to the other worldly experiences for some rather dramatic screenplay and there are scenes which are simply beautiful in their animation and setting. Like with his other films, there is a great deal of attention paid to the setting; especially the family home. While I disagree with its design, many of the elements do make sense, at least in terms of how the film is set. I don’t think that the scene with the Girl’s Festival dolls would have worked half as well if the house wasn’t open plan!

As with his other films, the score is also well paced and beautifully set to the scenes, making the film a fully immersive emotional experience and while we enjoyed one of the few Japanese dub screenings in the UK, I think that judging by the English cast, the English dub will be just as good, though with the exception that an actual four year old won’t be used for the part of “Kun”.

I feel that the “marmite” reaction which this film has had with the audience is due, in part, to the individual experiences with children and the difficult process of trying to emotionally bond with the parents and Kun himself. It is a difficult ask in my opinion. Mirai is a very family friendly film and this is another animated film which I will thrust in front of my significant other to introduce her to the genre. It will polarise you if you see it, however that should not put you off. Mirai is a beautiful production with a great deal of skill and expertise in its technical elements, and the story is simply sublime. Even if you feel like this film may not be for you, if you have enjoyed any of Mamoru Hasoda’s previous work, I strongly recommend that you go see it for yourself and make your own opinion.

9
While polarising, Mirai is a beautiful production and emotionally moving.