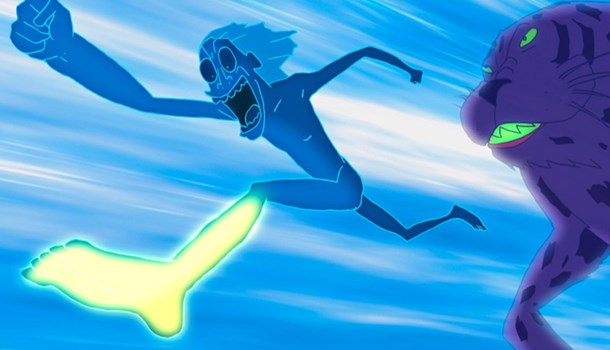 Masaaki Yuasa couldn’t be a hotter property right now. As well as his recent success with Night is Short, Walk on Girl and Lu Over the Wall, the visual maestro also has The Tatagami Galaxy, Ping Pong and even an episode of Adventure Time under his belt. But years before all of that, he made his directorial debut in 2004 with Mind Game. Based on Robin Nishi’s manga of the same name, Mind Game has gone on to become something of a cult classic – praised by the likes of the late Satoshi Kon but often overlooked due to the scarcity of Western home releases. However the film has gotten a new lease of life thanks to an overwhelming successful Kickstarter campaign by Anime Limited, with a new worldwide Blu-Ray edition due in the coming months.

20-year-old budding manga artist Nishi has never been a particularly lucky guy. Just after bumping into his childhood crush Myon and deciding to proclaim he’s always loved her, he finds out she’s about to marry someone else. However a series of unfortunate events at Myon’s father’s restaurant take a turn for the worst, with Nishi receiving a bullet from an irate Yakuza member in the most unfortunate of places. After defying God to receive a second chance at life, Nishi vows to live life to its fullest – leading to a high-speed chase that ends with Nishi, Myon and her older sister Yan starting a new life in the stomach of a giant whale.

Is all of this already sounding a bit too crazy for you? If so then strap yourself in because this is just the beginning. Mind Game is 103 minutes of unorthodox, psychedelic imagery bound together by an “anything goes” storyline that’s often more symbolic than it is cohesive. Such is the case that it’s amazing that Studio 4°C were happy to back this as someone’s debut feature. Opening with a montage of seemingly unrelated sequences that won’t completely make sense until they are repeated at the very end, Mind Game throws its viewers in at the deep end whilst tauntingly dangling a flotation device at the side of the pool. However its core messages about self re-discovery and making the most of life are crystal clear, told through characters that remain both believable and relatable even at the height of the film’s absurdity.

Make no mistake Mind Game is an absolutely beautiful film, but it isn’t a conventional beauty in the same way something like Your Name or a Studio Ghibli work is. Here the charm lies in expression, with the film constantly fluctuating between styles and aesthetics to create a pretty mesmerising experience. Traditional animation, CGI, sketches, real-life photographs – there isn’t a single style off limits and the film is quite happy to shift between them at a moment’s notice. The film’s use of colour is equally masterful, with many of the early scenes rendered in a single colour to amplify their mood and atmosphere. Character and background design is fairly simplistic for the most part, but in turn this simplicity allows a smoother and more dynamic level of animation. Take Nishi’s meeting with God for example, represented as a figure constantly shifting in design every second. The sombre mood of Nishi’s past life as a loser gives way to new momentum with his resurrection, prompting a gorgeously animated car chase that serves as the finale to the film’s first act.

There is a brief lapse in variety when the film hits the halfway point, however in addition to serving an important narrative purpose this is just a brief respite to it coming back bigger and more boisterous than before. Cue multiple musical numbers, the weirdest sex scene outside of Belladonna of Sadness and quite possibly the longest running sequence ever put to animation. The film is still engaging in the same sort of wild experimentation it did before, only this time it feels different – again perfectly corresponding with the characters’ acceptance of their new life inside the whale. Gone are the mono-colour scenes and gritty photo-real close-ups, replaced with explosions of colour, music and passion. Just as the characters are enjoying what’s unfolding on screen, you can tell that the animators were having a blast bringing these concepts to life.

All of this builds up to an ending that’s undoubtedly going to annoy some in its execution, outlining a conclusion for the characters while at the same time confirming nothing at all. The single sentence the film concludes with is trolling at its finest, but arguably it’s the perfect way to end a film that’s built its foundations on being so utterly bonkers. Anything less would feel too normal.

Mind Game is a film that isn’t going to please everyone. The rollercoaster it calls a story takes a little while to gain momentum and the unpredictable aesthetic a far cry from the consistency many anime fans are used to. But the experience Mind Game delivers is so much more than that – a tour de force of visuals, music and metaphors that represents just how diverse and creative anime can be. It doesn’t straddle the line of eccentricity – it calmly picks it up, shatters it and then carries on as if everything it does is completely normal. At this point Masaaki Yuasa has done more than enough to establish his brilliance, but Mind Game proves it’s something he’s had since the very beginning.

9
Colourful, surreal and constantly crazy. Insanity doesn’t get any better than this.