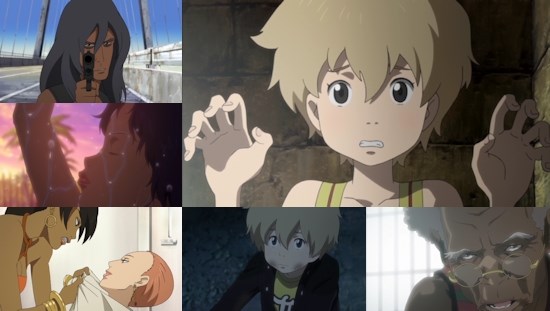 The first half of Michiko & Hatchin proved to be an impressive affair - a wonderfully varied larger-than-life road trip centred around its two main characters, but with plenty of unique individuals who they meet upon the way to imbue the series with a cornucopia of distinctive flavours that added immeasurably to the series as a whole.

Come the end of that first volume however, it felt as if our attention was turning towards the show's big picture, and the hunt for Hatchin's father Hiroshi - with rumours of his demise proving to be decidedly premature, there's a new energy to this search, but thankfully this doesn't prevent the show from doing what it does best throughout. If you were concerned (as we were) that the duo's search would get in the way of the entertaining side stories that Michiko & Hatchin has capably delivered, this is soon brushed aside in the early episodes of this volume via a visit to perhaps the world's worst doctor, a spot of treasure hunting for Michiko's friend turned would-be captor Atsuko and plenty more besides.

As we move towards the climax of the story, the series does a fantastic job of retaining the feel and structure of these standalone adventures while still weaving them into the greater whole of the narrative - once Hiroshi's location and movements are revealed to the cast in more concrete terms, the journey undertaken by various parties to track him down similarly ensures that all of the main players are in hot pursuit of both Hiroshi and/or Michiko, and the result is gripping stuff. If the first half of the series brought forth comparisons to Cowboy Bebop and Samurai Champloo, the structure of the final third of the show could almost be compared to the likes of Breaking Bad as its variety of "villains" of varying descriptions engage in a cat-and-mouse chase largely unaware of exactly what the other parties are up to.

You could argue that it's at this point that the series shows what it's truly capable of, growing from a series of engaging one-shot stories with a theme running through them to produce a grand vision that is excellent in its execution. You could argue that its ending is a little saccharine in comparison to the hardships of the world it's inhabited throughout, but even this is a minor niggle given our overall impression that the series has done enough to deserve the right to provide something of a happy ending for its main duo, and in particular Hana herself given the growth of her character we see throughout the show.

Michiko & Hatchin continues to be comfortable in its own skin in terms of its animation - its unique colour palette accentuates the easy-going, fluid style which helps to hide some obvious deficiencies and ultimately fits it like a glove whether it's indulging in an action scene or a quieter moment. At times the ambition of the series does catch up to it when it comes to elaborate car chases or the like, but these moments are relatively rare and never slip up to the point of ruining the experience. Alongside this, the series continues to make full use of a magnificent soundtrack that brings the best out of every scene in a way which really can't be understated - you could even argue that the music does more to communicate the mood of the show's world and characters than either the Japanese or English language casts, although they both do a passable job in their own terms too.

Finally on the topic of presentation, Michiko & Hatchin continues to look pretty good on DVD - perhaps its colour palette and moments of action would have proved more striking on Blu-ray, but there's nothing to impede your viewing experience here whatsoever, thanks to a decent transfer and practically bulletproof subtitles.

Having loved the first half of the series, I had some genuine concerns that Michiko & Hatchin couldn't hope to build upon its impressive beginnings once it had to deal with the requirement to focus on its main story, but I'm thrilled to be proved wrong - if anything, this second part of the show ups its game significantly without losing any of what made the first half so enjoyable. It's a real shame that the series hasn't enjoyed the same kind of opportunities to break out to a mainstream audience as Cowboy Bebop - its lack of fantastical space-faring elements naturally makes it less eye-catching, but in narrative terms it can give some of the best American TV drama series a run for their money and thus deserves a wider audience than anime fandom alone.

9
A well-realised world filled with fascinating characters and deployed to promote a narrative that is incredibly compelling - Michiko & Hatchin belongs in the highest echelons of anime story-telling.
LATEST REVIEWS