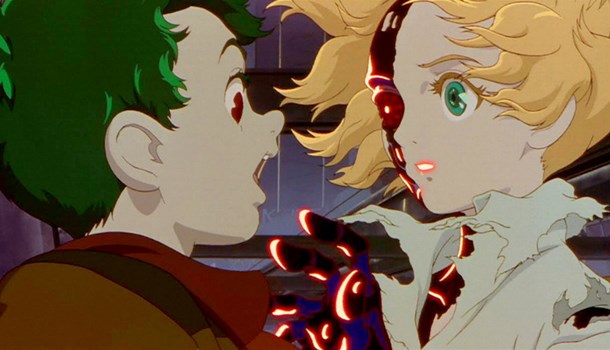 Note: This review was originally written by myself a few years ago, I am now updating it (e.g. correcting grammar/spelling mistakes) and uploading it onto UKA. Although I still feel the review is accurate opinion-wise, in regards to facts such as me having watched it three times, these may now be incorrect (I've watched it more like 4 or 5 times now).

I watched this 3 times. I have to say I liked it the first time, loved it the second and liked it a lot the third. It is based on an old manga by the 'inventor' of manga, Osamu Tezuka. Because it was made after the man's death he didn't exactly have a hand in it, well, not a living hand at least. The film reeks of 1950s detective stylings with a sci-fi twist. This isn't always a good thing but here it works exceedingly well. The plot seems boring at first but observe as you get sucked in and start to care for the heroes and despise the villains.

The computer graphics are simply amazing, incredible and awesome. Wait, no, screw that, the graphics tower miles above the adjectives I just used. The animation is clean and bold with a very 'Tezuka' style. The story is a classic with a clear anti-racism moral at the end and is filled with twists and action.

Its a hard anime to describe - effectively a film-noir with a 1920's influence, set in a sprawling future metropolis where mankind seems to live in two different societies - the upper classes living on the surface, and the poor working folk who dwell underground in Zone 1, who hate their oppressors and the robot servants that have taken so many jobs from them. Enter a private-eye and his son sent to the city to retrieve a wanted scientist, political machinations between two rival factions and a strange young girl called Tima, and you have a stylish tale who's complex plot belies its seemingly child-like character designs.

Sadly, with a PG certificate it doesn't know whether to aim itself at kids or adults. The plot is far to complex for anyone under 11, but the ethics and morals seem like those found in a movie made for five year olds.
9
Brilliant, artistic, political and deep. Sadly it should have been aimed more squarely at one audience.
LATEST REVIEWS