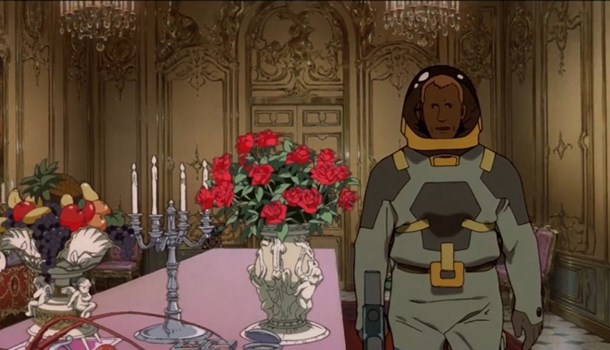 Memories is an interesting title. Its UK release literally came out of nowhere last June as part of Sony’s Animax label. It never caused much fuss, despite being one of the finest anime DVDs of last year, and I don’t think it got the attention it truly deserves.

Hailing from renowned artist Katsuhiro Otomo, creator of Akira (of course you already knew that), Memories is an anthology of three short stories, each very different but intriguing in their own right.

The first short film is set in the far future, and a team of galactic rubbish men come across a distress signal from an abandoned ship. As two of the crew, Miguel and Heintz, go to investigate, they soon find themselves in a fantasy world of an Opera singer’s memories. It is a literal mind screw as the further the men venture into the ship, the wilder the film becomes. The music that accompanies the beautiful bright imagery compliments the whole “epic” feel that it holds and much of the scenes will take your breath away.

The second film is slightly more light-hearted, following the escapades of a moronic chemist called Nobuo Tanaka who thinks he is testing a new tablet to help his cold, but instead ends up swallowing some sort of biological weapon that makes him give off a very poisonous gas. Only problem is, he doesn’t realise this, and in an attempt to get away from the gas, he actually just drags it everywhere with him. This is a little disappointing compared to the first film, but an entertaining tale which stands out as the least serious, but at the same time the least memorable of the three stories.

The third film is directed by Otomo himself, and as the shortest of the three, it beats them all with its unique, sketchy almost European style. It shows us an isolated fictitious city, putting all its resources towards firing cannons at an unknown enemy, which perhaps doesn’t even exist at all. It follows a day in the life of a boy, naively longing to be the person who fires the guns and his father, a man with the typically low level job of simply loading the cannons. I think many people won’t get this last piece, but it you do; you’ll enjoy it nearly as much as the first.

Overall I think you could buy this on the strength of the first film alone, and even though in many aspects it fails, I think it’s a great reminder of how truly diverse and daring animation can actually be.

8
One of the few truly unforgettable anime releases of 2004.
LATEST REVIEWS