Melancholy of Haruhi Suzumiya (The) 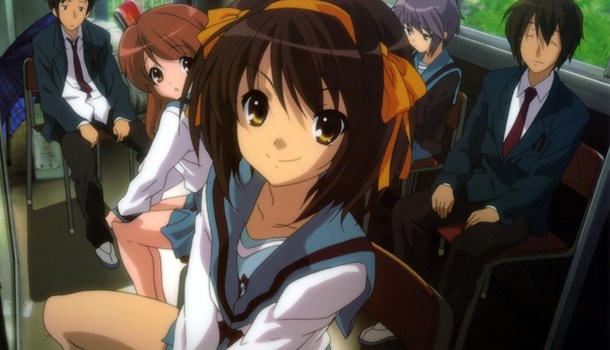 Melancholy of Haruhi Suzumiya (The)

One of the true cult classics of recent years has landed in the UK, and although the hardcore are well versed in the exploits of the SOS Brigade, the rest of Blighty (including myself) can now find out what all the fuss is about.

The series concerns one oddball schoolgirl, Haruhi Suzumiya. She's obsessed with finding interesting things and people to fill her days with, and so far nothing is working. Scaring the hell out of all those around her, she has no friends to speak of - until she latches on to her new classmate, Kyon. In a moment of idle chatter, Kyon suggests that those who want to innovate have to create things themselves - and suddenly the whirlwind of energy that is Haruhi Suzumiya is kidnapping, extorting and exploiting her way into creating a new school club - the SOS Brigade!

Characters are quickly introduced, with the meek-but-moe Mikuru, bookworm Yuki Nagato and "mysterious transfer student" Itsuki Koizumi. None are what they seem, and soon Kyon will be the centre of a torrent of craziness, all centered around Haruhi and her bizarre whims.

The thing with Haruhi is that it's hard to really sum up the show in a way that conveys what it's really like. FLCL was gracious enough to lend itself to being called anarchic, but that doesn't really fit here. There's just something about the execution that lends it a little extra life, making it very compelling and highly entertaining.

The weirdness of the subject matter (and I'll try to avoid spoilers in this first disc review) is continued into the special edition versions of the show, starting with SE volume 2. In Japan, the series was originally aired out of order, making it highly confusing and making certain revelations that could only be appreciated in hindsight. It was very clever and gave the series even more mystery. The standard edition DVD's present the episodes in chronological order, while the second Special Edition volume will have a special DVD that shows them in the order in which they were aired - for that reason, fans that want the "genuine" Haruhi experience need to wait for the second volume.

For the rest of us, we have two editions to contemplate with volume one - the very expensive Special Edition, which includes bonus items such as soundtrack CD's, cosplay ribbons, pencil boards and a handy box to store future volumes in, but at £49.99, it's a big ask. The standard edition is just that, and contains all the "bonus features" but none of the goodies. I will say that the SE version is beautifully crafted, and if you can afford it, give it a shot...

So is the series worth the hype? On the basis of these 4 episodes it'd be hard to give it a definite yes (keeping in mind that the hype is HUGE!), but with the best still to come, you've got to give it points for making a very strong start. Points also to the excellent dub, which captures the characters very well - though purists will spurn it for the sub of course ^^

With memorable designs, some great music and THAT dance, it'd be a crime to pass this up - one of the great events of the year, making it one of the "must-haves" alongside Death Note and Paprika.

Textless opening/closing credits
TV Broadcast preview
Making of
9
Add another point for the SE version, but Haruhi is a great series, with some awesome characters and a great script. Fans of anime comedy shouldn't hesitate to pick this up.