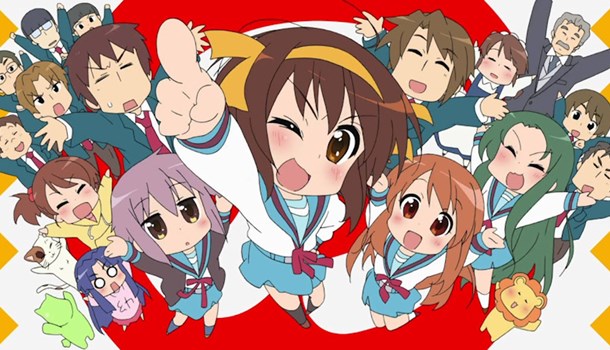 While recent days have brought a new flurry of speculation surrounding a second series of The Melancholy of Haruhi Suzumiya at the time of writing, for now we can at least take a deep breath, relax, and enjoy some more loosely Haruhi-related entertainment thanks to Kadokawa's continuing efforts to bring us two mini-episodes of their comedy-centric The Melancholy of Haruhi-chan Suzumiya each week.

After thoroughly enjoying the first batch of episodes that this series had to offer, I have to be the first to confess that for a brief period things slipped a little overall in the episodes we're looking at here - Not to any kind of terrible degree, but there was a noticeable drop in the amount of times I found myself laughing out loud for a few instalments.  Thankfully, it soon seemed to pick up the pace again, taking us to ever more bizarre places in its search for humour, from a miniature Ryoko acting as a jack-in-the-box through to Mikuru on a crucifix surrounding by balloon animals.  If that isn't weird, then I don't know what is.

However, as the weeks progress and more episodes become available, I have to confess that my attentions are frequently turned away from the new doses of The Melancholy of Haruhi-chan Suzumiya, and more towards its even briefer sister series Nyoron Churuya-san.  While Haruhi-chan seems somewhat tethered towards its need to provide at least some semblance of plot and characterisation, Nyoron Churuya-san is an almost entirely freeform affair made up of very brief skits and without a care for completely turning the personality of characters like Kyon on their head.  Quite simply, some of the sketches on show in recent episodes are absolutely hilarious beyond compare, with my particular favourite of the moment being the appearance of "Churuya's Great Great Adventure", a wannabe 8-bit computer adventure game that predictably involves an inventory filled with smoked cheese, and a finale brought about by Kyon that I won't spoil, but it made me almost literally fall out of my chair laughing.

It's a strange situation to be in, but I actually find myself coming to the realisation that were I to review Nyoron Churuya-san in isolation, it would be a definite ten out of ten contender, leaving the main course of Kyoto Animation's efforts to actually drag it down slightly.  Having said that, both of these series are fantastic to watch, and well worth setting aside ten minutes or so of your weekend to watch each week.  Even if you aren't a big Haruhi fan, if the surreal humour offered up here potentially appeals to you then you really should give it a try, and you too will find yourself expressing disappointment using the phrase "Nyoron..." in no time.

8
A slight drop in quality for the main event, more than made up for by the hilarity of its sister show.
LATEST REVIEWS