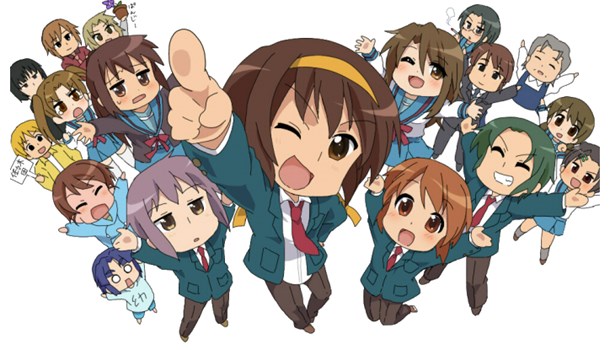 In typical Kadokawa fashion, nobody knew exactly how long The Melancholy of Haruhi-chan Suzumiya would run for and when it would end, and when that ending came it was courtesy of simply posting up a video instead of any expected new episodes which served as the series end credits - Cue the beginning of conspiracy theories about this series of short online episodes being canned early and so on.  If there's one thing that is always assured about the Haruhi Suzumiya franchise, it's the ability to generate controversy and anguish amongst its fans.

That aside, this final bundle of YouTube videos brought us some of the peaks of The Melancholy of Haruhi-chan Suzumiya as it continued on its merry and surreally comical way, throwing in references to the series proper while also serving us up with some frankly bizarre scenarios from a talking balloon animal through to some jigsaw-related despair from Kyon and Koizumi.  To say that you had to be there to understand it would be an understatement, but the episodes covered here generated a fair number of genuine laugh out loud moments, fulfilling the light-hearted role of the series to a tee.

This sense of humour occasionally transcends into near-genius, with the final episode commencing with a beautifully made mock-up of a Melancholy of Haruhi Suzumiya visual novel (created by Yuki Nagato of course) which could easily find a place as a product in Japan in its own right, and one that I'd most probably buy in all honesty.  If nothing else, Kyoto Animation knows its audience and how to cater to them frighteningly well.

Overall, The Melancholy of Haruhi-chan Suzumiya hasn't always managed to tickle my funny bone on a consistent basis, but when it does hit the spot it does so with intense bursts of absolute hilarity, using and abusing both the original series cast and setting to expert effect and simultaneously ridiculing and paying homage to the show that inspired it.  Securing the services of the full cast of original voice actors also undoubtedly does a lot for the mood and authenticity of the show, which when mixed with what seemed to be ever-improving animation and production quality left us with a top-notch series that won't look out of place on DVD.  It's a given that Haruhi fans will love it, but even if you're either new to the franchise or not entirely sure of its merits there might well be something for you if you're looking for a short slice or twenty of slightly off-kilter humour.

My final words however must be reserved for this series' sister show, Nyoron Churuya-san, which takes this surreal humour to ever heightening extremes and in the process manages to be the single funniest piece of anime I've seen in at least the past year.   Aside from Churuya's plaintive cry of "Nyoron..." which makes for the show's catchphrase, each and every one of these short episodes manages to take every bit of humour demonstrated by the original four-panel manga upon which it is based, ramp it up to new heights, and fire it at you constantly for a couple of minutes each week.  It's the kind of series that could well leave you with some new catchphrases of your own to confuse your non-anime watching friends with, and I defy anyone who has watched the final episode to walk past the local supermarket cheese counter without feeling an odd compulsion to chant "Banzai smoked cheese!"... If Haruhi-chan is near-genius, then Nyoron Churuya-san is genius, pure and simple.

9
Haruhi-chan is great to watch, but it's eclipsed by the miniature genius which is Nyoron Churuya-san.
LATEST REVIEWS