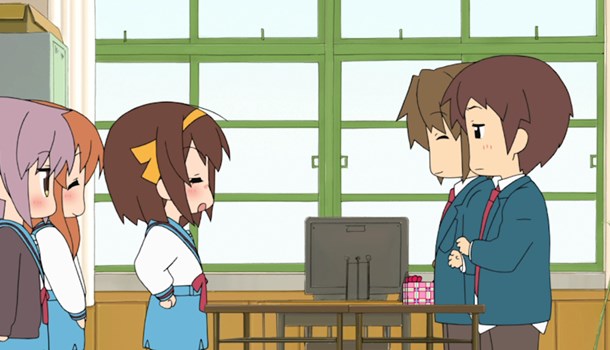 Ever since the release of The Melancholy of Haruhi Suzumiya in Japan back in 2006, there's been an outpouring of near fanatical devotion to the series and its depiction of Haruhi, an ordinary girl who of course is anything but - Indeed, the show has all but sparked a religious movement light-heartedly known as Haruhiism, such is the state of fervour that the series has generated amongst anime fans across the world.  However, the years following this cultural phenomenon has turned much of the excitement into frustration thanks to an interminable wait for a second series punctuated with rumours, half-truths and misunderstandings which have frequently whipped up the franchise's fan base into a frenzy of excitement followed by sighs of disappointment.

Well, here's some good news for you - Haruhi Suzumiya is back!  I will however have to immediately follow this up with the bad news, that this much vaunted return is in the form of an (as yet unspecified) number of short episodes, broadcast via YouTube under the moniker The Melancholy of Haruhi-chan Suzumiya.  However, even this bad news isn't that bad as these web shorts reunites the original cast of Japanese voice actors, every episode is getting English subtitles for a simultaneous release with its Japanese equivalent, and best of all (this being YouTube) it's absolutely free to watch.  Not only that, but continuing with the Haruhi theme Kadokawa are also regaling us with occasional short episodes of Nyoron Churuya-san, based upon a series of four-panel manga featuring Mikuru's slightly bonkers friend Tsuruya.

As you might have guessed from the short episode format, The Melancholy of Haruhi-chan Suzumiya's primary aim is comical entertainment, frequently employing chibi-esque characters and going purely for laughs while keeping the series firmly entrenched within the Haruhi universe and concepts.  As is so often the case with these things those attempts at comedy can be hit and miss, but from these first eight episodes released over the first three weeks of the series it's fair to say that the ratio of hits to misses is very much in its favour, with some simply hilarious moments covering the gamut from slapstick comedy through to some amusing one liners and priceless expressions.  If you're worried about these episodes "cheapening" the franchise then I suppose you might have some grounds for argument, but if you can get beyond that (and the cutesy character designs really help with this) and just go with the flow, chances are most episodes will at least leave you smiling.

The Nyoron Churuya-san episodes (of which there are four at the time of writing) take us into a more surreal comic territory, with plenty of mentions of smoked cheese and other small vignettes that are often outright bizarre - Not that that makes them any less funny, and again chances are you'll get a laugh or two out of these ultra-short episodes.

It probably goes without saying that this series is proving itself to be a must-watch for Haruhi fans, making the most of the characters the franchise has at its disposal without the usual constraints of over-arching stories or trying to refrain from doing anything too absolutely daft with them - Let's face it, they wouldn't be able to get away with a miniaturised Ryoko or Nagato enjoying some hentai games in a full series of The Melancholy of Haruhi Suzumiya!  This may not be the second series of Haruhi that we've been eagerly waiting for over what feels like a million years, but it fills a gap while going some way to remind us why the franchise is so popular in the first place.

8
It isn't quite a new series of Haruhi, but boy is it funny when it hits the mark.
LATEST REVIEWS