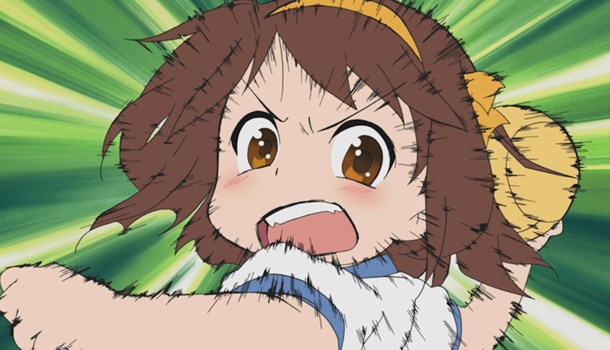 Those who read my previous review of the first volume of "The Melancholy of Haruhi-chan Suzumiya" when it was released as a pack-in with the second season of its originating show may remember my idle question posted in the concluding paragraph: "If this is volume one, where is volume two?" I asked, and was quickly informed by a note from my editor (thanks!) that the second volume was coming as a stand-alone release. Lo and behold, here it is. So, how does this second half fare, released into the wild to fend for itself without the benefit of being strapped on as a freebie?

First of all it's important to state that, much like its first half, this release is only for the hardcore Haruhi fans out there. If you approach this release without an existing in-depth knowledge of the characters and the memes that surround them then you are in grave danger of having the majority of the jokes sail right over your head - you may still be able to enjoy the slapstick and rampant insanity, but a lot of the punch will be lost on you. In fact, this release also goes a long way in building on the archetypes and setup generated in the first volume, making that prerequisite viewing as well. With all that in mind, lets get on to the actual review, shall we?

For a quick catch-up, both “The Melancholy of Suzumiya Haruhi-chan” and “Nyoron! Churuya-san”, are ONA (Original 'Net Animation) series made up of very short episodes, originally adapted from manga of the same name. “Nyoron! Churuya-san” stars a super-deformed version of Tsuruya who has a particular penchant for smoked cheese, and who is surrounded by a nearly sociopathic and uncaring version of the main “Haruhi” cast. “The Melancholy of Suzumiya Haruhi-chan” continues its straightforward adaptation of the source manga, taking all of the character’s personalities and in-jokes and dialing them to up to eleven.

While the first volume had some rather rough patches in the visuals for both mini-series, any style and animation issues have now been well and truly dispatched to give this second volume a much more polished overall look. Nyoron Churuya-san in particular appears to have shed its initial issues with much more fluid use of 3DCG, now looking much more comfortable with its rather minimal approach. Both series, in particular Haruhi-chan, use the visuals excellently in shortening the amount of time it takes to set up a scene or a gag, making for a much more elegant execution overall.  Haruhi-chan also succeeds in varying its art style to a great degree both between and within individual sketches, making for some great visual shorthand when setting up or telling jokes.

As I have made pains to mention in every review I have done of a comedy series, humour is deeply subjective. With this in mind, I can safely say that for the entire runtime of this second volume a smile never once left my face. As with the first volume, the jokes come thick and fast. If a joke works, you get a good chuckle out of it and you are already on to the next gag, on and on until you are laughing out loud like a silly person. If a joke falls flat or doesn't quite work: welp, never mind, another one will be coming up directly afterwards that may fare better. “Nyoron Churuya-san” in particular benefits from a much wider range of gags this time around, building on the somewhat one-note puns presented in volume one. This pace certainly feels a lot more agreeable to me than other comedy series I have viewed recently (which I will not mention for fear of reprisal!)

A special mention has to go out to the bizarre extra that made its way onto this volume - “What about Oniguchi?”, which I feel should win some kind of award for being a crazily off-the-wall thing to make at all, let alone stick onto a DVD. These extras follow a member of the production staff from Haruhi-chan as he dresses up as a Red Oni and has very short, bizarre adventures. Its hard to go into further detail without ruining the joke, but suffice to say that while they may not make you laugh these shorts will at least bemuse the hell out of you.

Stuffing a final conclusion and score onto this release is honestly a bit bizarre - there is a lot of great humour to be had here, but a lot of the jokes will only work if you are already a die-hard Haruhi fan to begin with. If not, this isn't going to convert you or serve as a suitable introduction. Also of note is that the total run time is rather short, clocking in at around 70 minutes all-told. While this is fine for a pack-in extra like Volume 1 was, as a stand-alone release what is on offer here feels somewhat thin. That being said, if you have the dosh burning a hole in your pocket, love Haruhi, and need a good laugh then do I have a show for you!