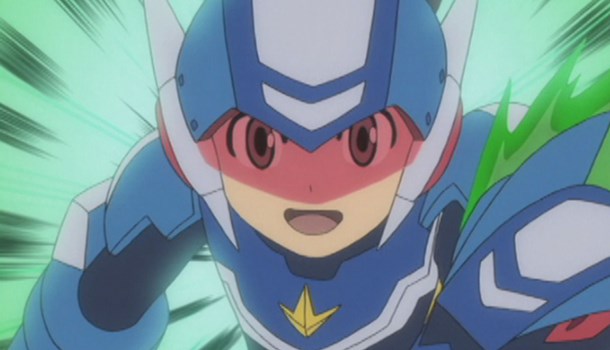 Megaman Starforce has little to do with the core franchise. It's set in a futuristic world where information and technology is controlled via invisible frequencies. Everything from cooking to transport is powered by these EM Waves, and only our hero, Geo Stelar (sp) can see them using his missing father's visualizer.

One fateful day he encounters a fugitive from the planet FM named Omega-Xis, who he harbours from those that are chasing him. In exchange, Omega-Xis grants Geo the power to transform into MegaMan and protect his friends and family from viruses and those chasing his new extra-terrestrial friend.

It's hard not to view this as a cynical marketing tool designed to push the related games franchise, because that's exactly what it is. It's very colourful and quite fun, but it's also pretty standard action fare. Thankfully the storyline does feature an arc, and therefore it doesn't do what most kids cartoons do and reset the status quo every episode.

The English dub is pretty good, even if it is unintentionally hilarious at times. The animation is standard Saturday morning TV fare, and the character designs and simple and colourful. The only major gripe I have is MegaMan's left hand, which is the face of Omega-Xis. This has the unfortunate effect of making our hero look like he's wearing a puppet on one hand, and it's just hard to take the show seriously. The use of "power up cards" is also pretty weird, but I guess it's just part of the setup.

The series arc is pretty contrived, with the usual gaggle of friends (some of which look bizarre), older mentors and daft episodes, most of which revolve around trying to get Geo into school. Surprisngly enough it's these story threads that are the most entertaining - Omega-Xis is a pretty petulant alien, and his tantrums are fantastic. Episode 4 in particular is a stand out.

This is aimed at the under 15's, and as such it's not going to be an essential purchase for most older anime fans. The "new universe" setting kills any nostalgia sales stone dead, and sadly this isn't going to convert many new fans. As a Saturday morning cartoon or a present for young kids it's fine, but for the rest of us, it's probably a pass.