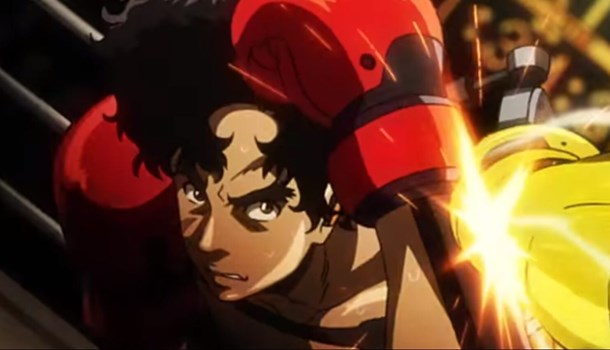 Let’s get one thing straight, I don’t like nor am in the least bit interested in boxing. My neighbour, when at university, more years ago than I like to admit, asked me if I was watching the fight that weekend because he “liked a fucking good punch up”. This couldn’t have left me feeling any more like never speaking to him again. True, there’s are some boxing films I enjoy, most star Robert Ryan or John Garfield or else Tsukamoto’s remarkable Tokyo Fist, but otherwise boxing to me is like asking me to watch a Meg Ryan romantic comedy  (showing my age again). I’d rather saw off my foot with a rusty hacksaw then gnaw upon it for dinner.

In precis: boxing doesn’t appeal to me.

Yet I decided to try out Megalobox. The usual "buy it on sale" situation because if it’s streaming I just wouldn’t get round to it (pun marginally intended). Little good could come of it. Perhaps.

Megaloboxing promoter, Nanbu, has his fighter throws fights. This not boxing but "Megalobox", boxing augmented with gear to throw harder, better, more precise punches. One night this fighter roars off on his bike, almost hitting Yukiko Shirato, the CEO of the huge Shirato company and strikes up a fight with her bodyguard, Yuri. As it is announced that Shirato is opening Megalonia, a huge Megaloboxing auditorium and competition for the four best fighters, Yuri being the best of them, the fighter is born again as Joe, Gearless Joe; and the only way to fight his way to the top four is to fight without augmentation as a proper boxer.

On paper the story is about as standard as you get. But that’s fine because a story is an outline, a guide, a set of lines and it’s within those lines that Megalobox has the opportunity to colour in the spaces. Much of what it colours in is equally standard, such as the techie orphan, Sachio, who joins them, and the delving into pasts and corporate family power battles.

Yet the series is so much more substantial than I ever expected and definitely so much more than the faint lines and obvious colours within them suggest. Much of this comes from a genuine humanity that sits underneath the whole story. For all that much of what occurs again repeats such well-worn tropes, even those not described, yet Megalobox continually transcends them. How it does this is a difficult task to define because I think that it is that matter of artistry and artistry is hard to put into words because it should be seamless. Perhaps part of the reason for saying most of the boxing films I like star John Garfield or Robert Ryan, is because Megalobox has a bit of the Hollywood golden age about it. Those boxing flicks starring Garfield and Ryan, like Megalobox, often followed conventional plots, but the sheer polished professionalism of their stories and the characterisation leave them a cut above. (Whereas Tsukamoto’s Tokyo Fist is understandably iconoclastic and can only really be considered in relation to itself.) There's something of that Hollywood gold era polish about Megalobox; the sheer quality of what sits behind it.

Ironic then that Megalobox looks like a much older series than it is, created as recently as 2018, and walking into the series pretty blindly I hadn’t realised how new it was. At first I thought it was maybe from the early 2000s, as often it was too smooth even if rough around the edges. The colour palette and designs feel decades old but in the right way, giving a clear sense of time and place. It gives the series a feeling of "realness" that a more smoothly animated and glossier show just wouldn't have hit. Maybe being of a certain age helps because the style resonates so cleanly but really I think anyone watching would latch onto the rawer feeling of Megalobox and accept it for what it is, and that is a damn fine aesthetic piece of work.

Megalobox is, unsurprisingly, a story all about dreams; finding them, accepting them and striving towards them honestly, whether it be Gearless Joe, Yuri, Yukiko Shirato, Sachio, even Nanbu. And it works because you feel like the characters earn whatever fate is rewarded them, whether good or bad. Plus the quiet humanity that is easily missed, such as Yukiko’s scheming brother who never becomes just a vicious, envious thug, instead finds a sense of peace. Again, it’s a balance that is really hard to hit because as Megalobox could easily have become far too bitter or far too chipper, instead each character, including those not mentioned, feel true to their nature and that’s what really matters.

Yet there’s a down and dirty feeling to the show, whether that’s the corporate overlords or Team Nowhere (Joe’s crew) who train under a bridge. If anything, the beginning of the series came close to Texhnolze’s brutal, sexually objectified opening episode, though the tone is different. Megalobox is more humorous but that also covers the darkness, the corruption, the manipulation and the guilt. For a while I wanted Megalobox to be darker, harsher, more howlingly nihilistic as Texhnolyze was - and perhaps it could have been - but in the end where Megalobox ends up feels like just the right place. (This is also perhaps my feeling that we need more series like Texhnolyze, that push boundaries; also on the surface the Megalobox gear look and feel a bit like texhnolyzed gear...)

Ultimately, for a series I took a punt on, Megalobox delivered far more than I expected. Yes, a lot of conventionality, with Joe and his makeshift, gathered together dysfunctional family collected around him. But it’s a series with heart, with retro-visual panache and one that punches far above its weight. 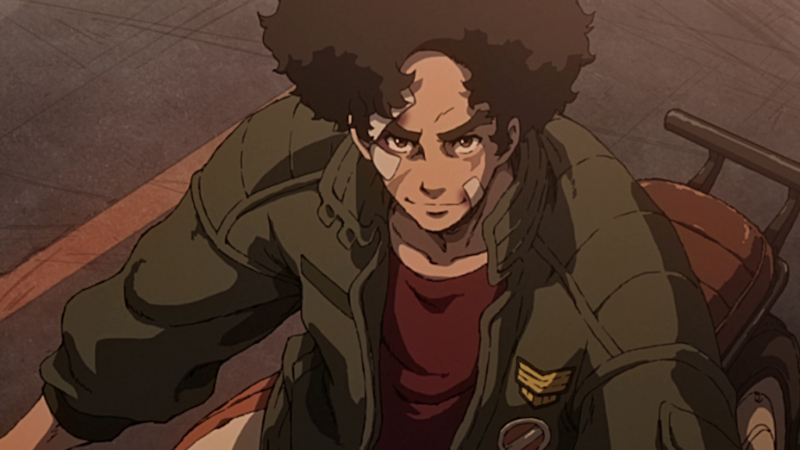 9
Megalobox has a raw, honest heart, humour, retro-visual fun and is far better than this reviewer could have hoped for.
LATEST REVIEWS