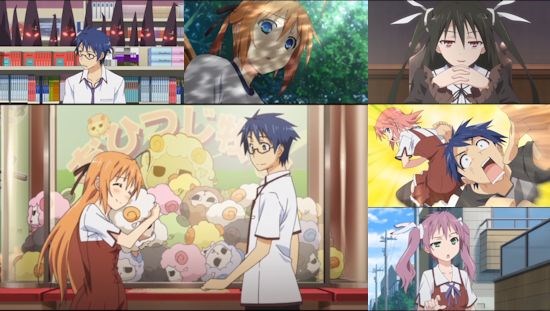 It's amazing the effect a child's upbringing can have on their personality as an adult - seemingly innocuous incidents or routines can have a major impact on their development, leading to all kinds of hang-ups and issues that follow them into later life. Imagine, for example, that you were a young boy whose mum was a wrestler that spent her time practicing her best moves on you. Then imagine that your younger sister grows up in a similar vein thanks to that very same environment of female strength.

It's this environment which haunts the protagonist of Mayo Chiki, and as a result Kinjiro Sakamachi (or Jiro as he prefers to be called; if you say his full name right... well, you'll soon get the pun if you watch the series) is quite literally allergic to girls - the merest touch from one can bring him out in that anime staple that is the nosebleed. Of course, this is quite the problem for a healthy teenage boy, but it is as of nothing to the problems he's about to face, as an innocuous bathroom visit leads him into a whole mountain of trouble...

This trouble is brought about the resident rich girl at Jiro's school, Kanade Suzutsuki, and more precisely Kanade's butler Subaru Konoe. Subaru is the talk of the school, or at least its female quotient, on account of his looks, poise and demeanour. However, Subaru has a secret - a secret that must never be revealed to anybody lest he lose his job as a butler. A secret that Jiro has just quite literally walked in on. A secret which acknowledges that Subaru is, in fact, a girl.

Mortified that her secret is out, Subaru sees only one way to resolve this problem - to kill Kinjiro. Luckily for him, for once his family background and being used for wrestling practice daily serves him in good stead, allowing him to survive long enough to find an alternative to death. Then again, maybe a quick, painless demise would be preferable to blackmail at the hands of the sadistic Suzutsuki.

Therein lies the thrust of Mayo Chiki, as Kinjiro finds himself spending more and more time with Konoe and Suzutsuki, leading him into all kinds of trouble from misunderstandings to being hunted down by Konoe's slavishly devoted fan club. In the midst of all this however, romance also blossoms, although even this is troublesome for Jiro between his allergy and a growing number of girls who seem to be taking more than a passing interest in him.

Unfortunately, this growing "harem" is perhaps the biggest barrier between Mayo Chiki being a fun little romantic comedy and a predictable one - the series is at its best when it focuses upon Kinjiro, Konoe and Kanade and their relationship, which offers up plenty of laughs and some really sweet moments, but once you throw another handful of girls into the mix the whole thing is diluted and loses a lot of its effectiveness.

That isn't to say that Mayo Chiki is a terrible series - most of its cast are great fun to watch, and even when the series is reaching the heights of cliché (you can probably just about survive the "take a shot whenever Jiro walks in on a girl in a state of undress" drinking game here) those characters blended with a great sense of fun keeps things peppy and ensures that the episodes fly by. It isn't brain-taxing, nor does it take itself too seriously, so as a light-hearted comedy with an occasionally wicked sense of humour it functions perfectly well.

Visually, the series won't win any awards but the overall aesthetic is really rather pleasant, with good, distinctive character designs and an appealing look. This UK DVD release has a perfectly acceptable transfer too, so no complaints on that front, and without an English dub this subtitle-only release is completely enjoyable with its Japanese voice cast in fine form and only a smattering of minor subtitle errors to mention.

If you're a fan of romantic comedies, in particular those with a more fan service-laden bent, then Mayo Chiki is a show that should hit all the right notes for you - it has strong characters who you can't help but root for, and most importantly of all it does actually know how to be funny when it puts its mind to it. On the other hand, if you're after some more serious drama and get a nosebleed at the mere thought of a comedy light novel adaptation, then this is a series which doesn't do anything sufficiently innovative to change your mind.

6
It doesn't break any new ground or do anything innovative, but Mayo Chiki is still a fun series even if it does wear a little thin by its final episodes.
LATEST REVIEWS