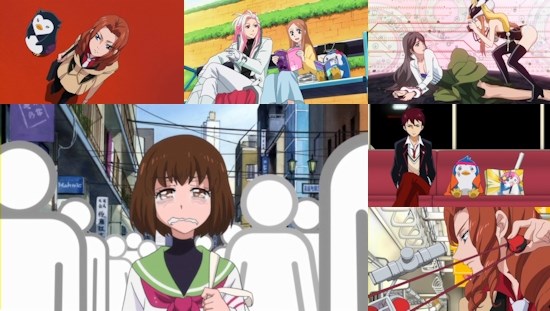 Having left the first volume of this series with Himari's condition deteriorating precipitously, any thoughts about the hunt for the titular Penguindrum are largely shelved by Shouma and Kanba as another opportunity to save - or at least prolong - their sister's life arrives tantalisingly before them. But at what cost?

If the first volume of Mawaru Penguindrum was about building up relationships and how the casts are bound together by the strings of fate, the this second half of the series spends quite a lot of its time shattering those relationships while conversely tying them together even more tightly - the revelation surrounding the parents of the Takakura siblings and their past explodes a lot of these bonds in one way or another, while even Yuri and Tabuki show darker sides to their personality borne from anger and despair in the wake of Momoko's loss. Add Natsume's own unique sense of determination to achieve her goals and there are no shortage of dramatic clashes ready to flare up at any moment, one of which was deemed disturbing enough for that episode to gain an 18 rating from the BBFC in an otherwise 12-rated series.

With so many of these present-day moments of drama, emotion and trauma hinging utterly on past events, the episodes which make up this second half of the series often become a morass of flashback upon flashback - while linking past and present in this way is so bad thing in itself, the sheer density and frequency of these moments leave large chunks of the series feeling jumbled or disjointed. At times the viewer can find themselves drawn into a critical, pivotal moment of tension only to be snapped out of it as we're thrown back in time to explain why it's so important, and by the time we've returned to what's going on here and now it's hard to regain interest in proceedings.

Alongside this, there are also elements of the series that become overly heavy-handed in terms of their abstract symbolism. In particular, there's a lot to be said about the concept of a generation of "lost children" whose lives are effectively thrown away by a country that doesn't know what to do with them, and it's an undeniably interesting point of discussion, but to depict this waste of young lives via a "child broiler" threatens to be unintentionally amusing rather than a coherent talking point. Similarly, the shift in some of the show's characters is so seismic that it threatens to lose credibility, with friendly characters suddenly becoming sadistic would-be killers and so on - again, the ideas behind these shifts are sound, but their presentation less so.

Still, even when it isn't getting things right, it's hard not to be engaged by Mawaru Penguindrum on at least some level - the show's use of visual language is fascinating throughout, and anyone who has watched and enjoyed Revolutionary Girl Utena will doubtless salivate over another series of his which leaves much of what it depicts wide open to individual interpretation, right the way through to the Penguindrum itself which is arguably little more than a PenguinMacGuffin when push comes to shove.

Even without a Blu-Ray release, the show's visuals look good on the whole, with only a few of the busiest scenes suffering from the inability of DVD compression formats to handle them seamlessly. Subtitles are also nearly flawlessly, and the series boasts an English dub that sits quite comfortably in the "good enough" category. Extras consist solely of opening and ending credits spread across these three discs, which is unspectacular but welcome considering the quality of the music that these credit sequences offer.

As a result of its unique brand of storytelling, this is a series that isn't for everyone - it's a show that will make you work for your enjoyment, and it isn't exactly the kind of thing that you can switch your brain off and watch mindlessly after a long day at work (aside, perhaps, from its ever-charming cast of miniature penguins and their shenanigans alongside the main story). Then again, even with some thought ascribed to it, there are times when you suspect that this series isn't half as clever as it seems to think that it is. The fact that it makes you think about it in any depth at all, however, is a rare triumph the likes of which we never really see in anime - yes, there are other thought-provoking series out there, but nothing quite invokes the same level of self-existential pondering that Ikuhara can inspire.

English and Japanese stereo audio with English subtitles.  Extras on this three-disc set consist of clean opening and closing credits for the series.

7
At times it loses itself in a tangle of flashbacks and overblown abstraction, but ultimately Mawaru Penguindrum is a fascinating, unique and thought-provoking series.
LATEST REVIEWS