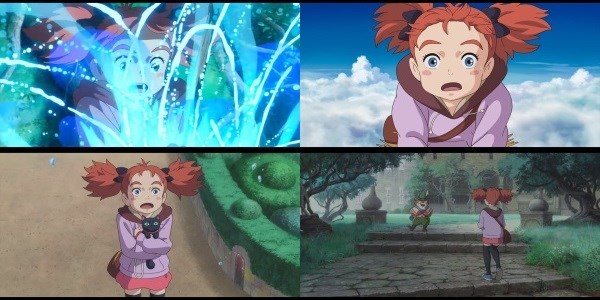 Comprising of former staff of Studio Ghibli; Mary and the Witch's Flower is the debut film of newly formed studio, Studio Ponoc. A film based on a novel “the little Broomstick” by Mary Stewart. The film is directed by Hiromasa Yonebayashi, who directed Arriety and When Marnie Was There whilst at Studio Ghibli. Making Mary and the Witch's Flower the third adaptation of a British Children's book handled by this director.

From the get-go the Studio Ghibli influences really show, as Mary and the Witch's Flower gets off to a visually impressive start. Treating the audience to an impressively dynamic action/chase scene, which in turn sets up the world and acts as a prologue for the story. From this we transition to the focal character of the film, Mary Smith, a young girl who has recently moved in with her great aunt Charlotte. A home in the English Countryside with nothing for a young child to do, except play in the surrounding forest. Guided by a black cat and a grey cat, Mary discovers the titualr Witch's Flower. A rare flower that only blooms once every seven years, known as a fly-by-night. This flower, along with the other discoveries in the forest, lead Mary toward an adventure filled with magic and intrigue.

The film itself is a visual triumph, showcasing great character designs, explosive and fantastic visual effects. Using its sense of magic and wonder as a way advance plot, but also provide comedy. Most of the story is shown through character action and interaction. After the first five minutes of seeing Mary on screen it's clear from how she acts and how others act around her that she is headstrong, but clumsy. Willing to help others, but doesn't have any particular talents or skills, and has issues regarding her hair: in particular its colour. The film makes use of small details like this to advance the story along. Going more for visual methods to portray themes and plot elements. Dialogue still plays its part to help convey certain aspects of the story across, but the action and visuals take centre stage here.

This makes the film feel simpler, and thus aimed more at a younger audience. Its morales and themes aren't outright stated, as they would be in a Ghibli film, but are more passively conveyed to the viewer, as plot devices and character moments rather than conversations to reinforce ideas. With its simpler approach to story telling, this gives Mary and the Witch's Flower a rather quick pace, where it feels like it just rifles through its plot. There was a certain point where I believed the film was reaching it's climax, when in reality it was just the lead into the film's final act. The quick pace makes the film feel fun and charming, when combined with its great visuals there's never a dull moment.

From this the character of Mary is also rather endearing, and the reason why the film works so well is wanting to see her succeed and overcome the challenges she faces. With this there are great moments that showcase her clumsiness, and reaction to being recognised for doing something well. For the most part the film comprises of a very small cast. The main point of interaction Mary has is with a black cat called Tib that has some really great reactions to what is going on. He is just a regular cat but the way he is animated, especially on his face leads to some rather comedic moments. The version I saw in the cinema was the Japanese audio with English subtitles, which had great voice work and fantastic music that really accentuated scenes as well as providing a great sense of tone.

With all this in mind, as a debut piece, Mary and the Witch's Flower really showcases the pedigree of the staff working at the studio. With great art, animation, and a rather simple and easy story to follow it makes a great first impression. While it may not have the grandeur in its approach to story telling that Ghibli had, using a simple approach to the story telling - that focuses more on action and visuals - really works in its favour. A film for the whole family, and one with a lot of charm.