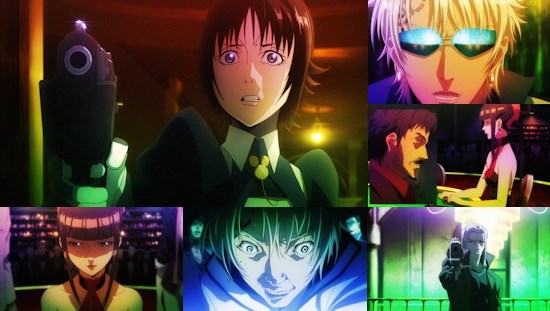 The first part of its movie trilogy arrived to rave reviews; the second garnered a more muted response (but hey, you can't make an omelette without breaking a few eggs, right?); so will the third and final Mardock Scramble film offer a spectacular finale to unleash the obvious potential of this adaptation of Tow Ubukata's sci-fi novel?

Perhaps unfortunately for The Third Exhaust, this final film needs to start off where the second movie finished, meaning that it's back to the casino for yet more time spent at the blackjack table. Of course, the stakes of the game are now stratospheric as Balot and Doctor Easter close in on the million dollar chips which also serve as containers for Shell's lost memories, and the powers that be aren't going to let these two upstarts get whatever they want without a fight. Once Balot sees through the cheating strategy employed by the dealer and turns it against him, the casino's "ace" appears to challenge them, and not only is he aware that there is something untoward in Balot's own play he also doesn't seem to need to counter it, serving as a perfect roadblock who prevents her from winning a single hand and thus reaching her goal.

Our protagonist isn't defeated so easily, of course, and after some fraught moments she recovers to lead the way in achieving her objective - with Shell's memories safely recovered, it's up to her to delve into them to make sense of his crimes; an experience which shakes her to our core, and changes the game as the efforts to bring him to justice leads her into a climactic battle with the rampaging Boiled for reasons that she could never have dreamed of.

By its very nature, The Second Combustion was a slower-paced film than the first movie, and no number of flying sharks was going to change the fact that it needed to spend a lot of its time playing roulette and card games. This is an issue that also afflicts the start of The Third Exhaust - the film struggles bravely with visual tricks and cues to spice up the action, and there's dialogue sprinkled throughout that adds a definite sense of importance to proceedings on a number of levels, but it still can't sidestep the fact that Blackjack really isn't a very interesting game to watch even when so much rides upon it.

Once that is out of the way however, you're arguably in for the biggest disappointment of all - the final portion of the original novel is a gripping, tense rollercoaster ride filled with peril, yet somehow this animated adaptation makes it all feel incredibly tepid and with none of that tense drama. Thanks to this, the result of Balot and Boiled's final showdown never feels like anything more than an inevitability, and although it's well-animated and looks impressive it falls flat in the most important sense of all - actually ensuring that the viewer is invested in events as they pan out. Given how long is spent in the casino, the final film's action scenes also feel rushed and far too short when they should be some of the highlights; thankfully the film does fare better in handling some of its other material and late revelations better, but this is scant consolation when it feels like the key foundations of what made the original book gripping are compromised. Admittedly if you haven't read the novel then things may flow a little better without that weight of expectation, but I suspect that by the time we reach the last movie's denouement those not already invested in the world of Mardock Scramble will probably be too bored to care anyway.

On a more positive note, The Third Exhaust does match its predecessors animation quality - GoHands' heavily post-processed visuals work perfectly within the film's sci-fi cyberpunk setting, its looks great throughout and delivers its action scenes (however brief) with ease. Even if it doesn't succeed in making card games look exciting on the big or small screen, the film does at least offer up enough flourishes to make things eye-catching to stop you losing interest entirely. As per the previous films, the Japanese language audio is definitely the place to be - not because the English voice performance is bad, but because Megumi Hayashibara's performance as Rune Balot remains so outstanding that nothing can hope to top it; even when the film itself is missing the mark in its depiction of the story, her efforts alone help to keep it on the right track.

As per previous releases, both the theatrical and default Director's Cut versions of the film are available here, both of which are available with English and Japanese language options - although there are only minor differences betwixt the two, it's nice to see them both available within the disc's horrifically over-complicated menu system on the Blu-Ray edition, alongside some other interesting extras including a discussion between Tow Ubukata and Megumi Hayashibara. Visuals and audio are both faultless on this UK release, and subtitles are all present and correct without issue, leaving nothing to ruin your enjoyment of the film in this regard.

Looking at its trilogy of films as a whole, you could argue that Mardock Scramble was always going to be burdened by the visual and narrative magnificence of the first film - certainly, the subsequent instalments aren't bad in any sense of the word, simply disappointing in their ability to build on that majestic start in some important ways. That fact makes this third and final film hard to rate - it still sports eye-catching visuals and interesting ideas in its own right, but it begins to crumble over the weight of expectation brought about by everything which has come before. Mardock Scramble: The Third Exhaust can still entertain and grab your attention sporadically, but in comparison to its source material it should have done so, so much more.

6
A solid finale to the trilogy which fails to build the tension that it needs, making for a particularly disappointing climax for those familiar with the original novel.
LATEST REVIEWS