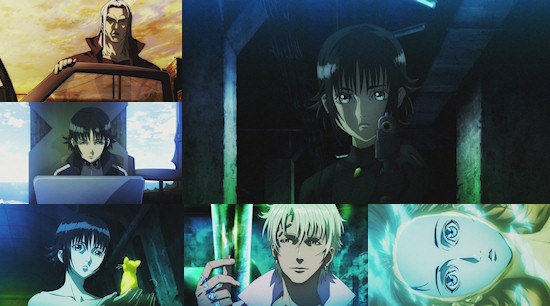 Although Mardock Scramble began its life in novel form, the trilogy's author Tow Ubukata is hardly a stranger to the anime scene, with works including Le Chevalier D'Eon and Soukyuu no Fafner to his name.  Given that pedigree, it was perhaps inevitable that Mardock Scramble would find itself granted an anime outing in some shape or form, and now here we are taking a look at the first of three animated, theatrical instalments produced by Gohands and with a screenplay written by Ubukata himself.

Thankfully (and unlike the first volume of its manga adaptation which we reviewed here), Ubukata's close involvement means that the story of The First Compression remains close to that of its original novel as it relates the story of Rune Balot, a young girl with a horrific past whose saviour, a man named Shell Septinos, turns out to be anything but.  As she's left to die in the fiery remains of Shell's exploded car, she somehow survives thanks to a slightly oddball private investigator named Dr. Easter and his sidekick, a shape-shifting mouse turned so-called "universal tool" and a government directive named "Scramble 09" that allows for the use of normally illegal technology to save the lives of crime victims in return for them using that technology in the name of justice.

With Balot outfitted with the ability to control and interpret electrical signals at will (something she proves capable of doing with surprisingly proficient ease), it's time for her to choose whether to use her powers as part of a case against the man she once believed had rescued her from destitution - a decision which is hard enough as it is, even before we catch a glimpse of some of the larger than life individuals that Shell is willing to hire to ensure that the latest "jewel" in his own nefarious plans is eliminated.

Given its science fiction bent, the first thing likely to catch your eye over the course of The First Compression is the city of Mardock itself - an occasionally jarring yet ultimately satisfactory blend of the super-modern (with extravagent buildings and roads seemingly made of pure light) and the present day with a twist.  The entire film is delivered via a grainy presentation that only serves to accentuate this depiction of the film's mostly gritty, well-worn locations and seedy characters, with only some occasionally clunky CG threatening to break its cinematic spell.

On a more general note, The First Compression's delivery is nigh-on perfect, squeezing all of the pertinent points of the first novel into its sub-seventy minute running time succinctly while simultaneously showing restraint in how its emotional impact in particular is expressed - rather than relying on words or descriptions to make a character's mental or emotional state clear, Ubukata seems more than happy to lean on the film's animation to convey such feelings; something which it largely manages to achieve with aplomb.  This ability to deliver on the emotional core of its story as it pertains to Rune Balot is helped massively by the character's voice actress - this could well be the best performance yet in Megumi Hayabashira's long and impressive career as she does an incredible job of depicting Balot as she swings from insecure little girl to determined survivor and then onwards to an individual consumed by a power and vengeance-hungry nature.

Hayabashira's pull no punches performance echoes perfectly the nature of the film itself, packed with violence, rape and nudity as it is but with very little of these elements wasted as it's always depicted out of necessity rather than titillation.  This is an adult story, and one told and depicted for an adult audience (don't be fooled by that cute golden mouse!), and it's something that can only be appreciated at a time when a lot of anime output simply doesn't dare to put some of the darker aspects of life into its viewfinder.

Ultimately then, Mardock Scramble: The First Compression is an absolute treat for fans of the original novel - it's always impossible for a visual adaptation of a book to match the human imagination while reading, but Gohands and Ubukata have done as good a job as could be hoped for here via a film that is gritty, well-paced and utterly compelling right the way through to its measured but satisfying build-up to the cruellest of cliff-hangers.

It's this abrupt ending that will always throw those watching not familiar with the novels into confusion (the first book closes in exactly the same fashion), and it does beg the question as to whether the movie will appeal to those new to the story - admittedly, some points are skipped over a little too briefly perhaps (most notably the explanation of the Scramble 09 process is a little lacklustre), but there's still enough here to grab you by the collar and relate its gripping story to you without leaving you lost or otherwise disappointed.  As for that abrupt ending, it's a good job Scotland Loves Anime is offering up the first two films as back-to-back screenings...

Mardock Scramble: The First Compression was screened at the Scotland Loves Anime 2011 event in both Glasgow and Edinburgh - it will be officially released in the UK next year through Kaze UK via Manga Entertainment

9
A near-perfect adaptation of the novel, and a fantastically dark, pull no punches cinematic experience in its own right.
LATEST REVIEWS