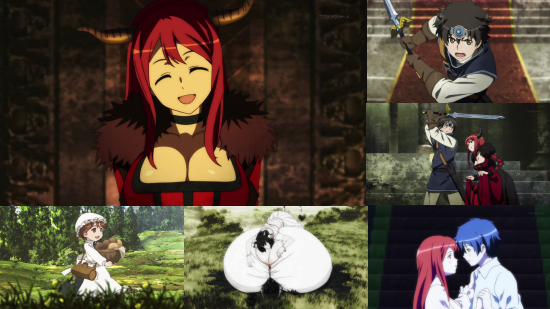 You can’t judge a book by its cover in the same way that you cannot judge the quality of an anime from a screenshot, a preview image or from the literature put on the back of a DVD slip case. As an example, if I was to judge a series like Spice and Wolf by its cover, chances are I would be taken away in a blacked out van in the middle of the night with a chastity belt strapped to my loins. However, Spice and Wolf isn’t a series involving a scantily clad wolf-girl... well, not entirely anyway. This points also holds true for Maoyuu Maou Yuusha. All of the advertisement and marketing for this series portrays a massive pair of globular funbags, tightly contained within a velvety red empire cut dress worn by a pretty girl with horns, who is smiling oh so sweetly. I am as guilty as anyone when I saw this picture and thought, “I need to feast my eyes on those…”, and thus I began watching this series. But, as I have since discovered, there is a lot more to this series than a pair of well-formed melons, as you shall see.

Maoyuu Maou Yuusha is based on a series of light novels which are still being released in Japan. Similarly, there are several manga series available, which are all being serialised and are on-going. Unfortunately, nothing has been released in English as yet, but I can only hope that some wise investor decides in the near future to take the plunge and release them to the western world. The series is based in a world of two halves. On one side are the Humans - locked in a pre-enlightenment civilisation where the rule of the church is law, serfs and large landowners rule, and where technology is basic and the economy focused on war. On the other side are the Demons - a magical clan-based civilisation with a mysterious king uniting them all under the banner of war against the humans. This unending war between Demons and Humans has lasted for generations, with neither side gaining a foothold in the others’ territory. That is, until the strongest of all men, the Hero, decides to invade the castle of the Demon King with an aim to end, once and for all, the demon ruler and the threat.

What the Hero didn’t count on was the Demon King being a big beautiful woman, a hundred years young and with a mind as sharp as diamond. He didn’t expect this woman to betroth herself to him and to want to join with him as his life partner. He also didn’t expect that born from this partnership, he would ally himself with the Demon King (Queen?) and embark upon a journey to not only create a lasting peace between the Demons and the Humans, but also rid both sides of their economic dependency on political conflict. Her dream is to see what the world is like on the other side of the hill, to see what life would be like without the continual threat of war, death and pestilence. And although she has a plan, she needs the support of the Hero, the nobility, merchants and others throughout the human world to bring it to fruition. It takes one hell of a special kind of woman to manage that. Love her!

After a weird change of costume (which totally threw me off), the exotically dressed Demon King travels with the Hero to a far-off country and sets up shop in a small manor house purchased and prepared by her loyal but demonic head maid. From this secret headquarters, the duo plot and manipulate the economy and politics of the human and demon worlds, all while longing for each other. The Demon King introduces the human world to the art of crop rotation, fallow fields, potatoes, gyroscopic compasses and the ultimate weapon of education and the written word, with the Hero instead focussing his thoughts on introducing the rebellious demons to the sharp edge of his sword and uniting the demonic clans so that the demon world, too, can be free of war.

One thing I have noticed about this series, which is something I have found quite interesting, is that all of the female characters (of which there are many) are very strong both with respect to their personality and their position within the story, and are really not sexualised. Even the Demon King, whose gargantuan tits are used as a lure to capture perverted fans like myself, are quite carefully controlled in their exposure, and actually make very few appearances beyond the second episode - although referenced quite a lot, they serve little function other than as useless meat. Speaking of which, the Demon King is a very interesting character. She is both highly intelligent, confident in her overall strategy and is a very strong diplomat. Personally, she is also very meek and introverted and hates being alone. She is an enigma, wrapped in a big beautiful body, and she is very cute, ticking the “moe” box quite effectively. Especially when she brings out her hugging pillow!

One of the other curiosities of the series is the pacing. The closest comparison I have found to Maoyuu is Spice and Wolf, hence the earlier references. Both involve relationships between quite stupid men and highly intelligent and powerful deities, both are expertly written and have excellent dialogue and both involve the large-scale manipulation of economies set against the human condition. However, whereas with Spice and Wolf the pacing can only be described as glacial, with the protagonists enjoying as much of their time together as possible, Maoyuu can instead be described as a having almost pyroclastic pacing, with two years passing in half a dozen episodes. This pacing has had its reasons - I mean how else are you going to see the results of economic meddling without a Sim City-esque “Cheetah” mode? But its consequences are that the series has focussed on the dealings of the Demon King and her growth as a “human” living in the human world, with the effect that the Hero has almost been ignored. Although this is being corrected in the later episodes, the whole “alliance” side of the relationship seems to have been sidelined for some reason, although I am glad that it’s progressing a lot faster than Spice and Wolf - I crave more character development.

Maoyuu Maou Yuusha is also extremely pretty. The entire series has this textured feel to it with the backgrounds looking like watercolour landscapes a lot of the time, in a style reminiscent of last summer’s Humanity has Declined series which gives it a rather unique feel. The characters and action are well-animated and, thankfully, the jiggle physics are kept under control as strict and as tightly as the Demon King’s bodice. Delicious.

Maoyuu is a difficult series to watch due to its pacing, but thankfully the deep characters, well written dialogue and its strong moral fibre more than make up for the disjointed scenes. The series is now moving towards its end on Anime on Demand with future episodes being released on a weekly basis and although there is only a few episodes left until this series ends, there is plenty for you to enjoy.

Japanese with English subtitles - available in 480P and 720P resolutions.

8
Mammoth mammaries are only one of many assets for this entertaining series.