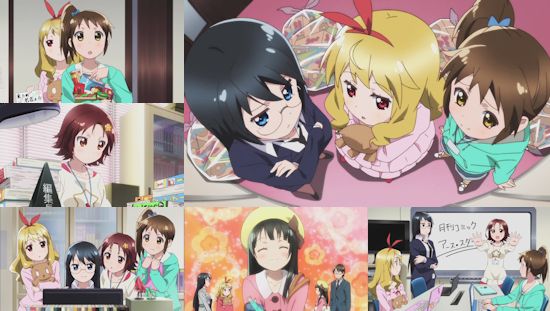 The winter 2013 season seems to be the season of short anime series - at least, it does when you glance through Crunchyroll's line-up for the coming months, which seems to have captured all of the short anime shows like some kind of licensing Pokemon expert.  Although watching these short shows and judging their merits for yourself is trivial enough, we still like to proffer our own opinions upon such things in the hope that our musings can perhaps be more entertaining to consume than some of the mediocre fare they cover.

This brings us to Mangirl - not, as it might sound, a series about cross-dressing or sex changes, as perhaps thankfully the "man" part of the title is short for manga.  The premise of the series, adapted from a four-panel manga, is that it takes a bunch of girls and throws them together as the staff of an all-new manga magazine that they've created - clearly, these girls are made of sterner stuff than your average Apprentice candidate if they can hire out an office and start a magazine just like that.

From here, the early episode of the show follows the girls as they go about getting the magazine off the ground - finding and hiring suitable artists, overseeing a gravure modelling shoot and eating lots of doughnuts (the last one is a correct evaluation of office life if nothing else).  This is no Bakuman however - admittedly the series very briefly touches upon the economics of creating their magazine, this is quickly glossed over in the name of comedy.

At least, I assume it's trying to be a comedy, but the trouble is that Mangirl really isn't all that funny - there's no shortage of the main cast goofing around, chatting and the like, but none of it really stands out from your average slice of life anime and a lot of the humour which you'd assume might be inherent in the premise of running a manga magazine is left on the table in favour of making references to One Piece and Doraemon.  Because hey, they're making unsubtle reference to manga in a series about manga, isn't that just hilariously meta?

On the flip side of my sarcasm, there isn't particularly anything wrong with Mangirl either - its animation quality is actually a cut above a lot of similar short series; Dogakobo's most notable recent project was YuruYuri, and in many ways this series boasts a similar aesthetic.  The voice cast does a perfectly good job in bringing their respective characters to life and all of those characters are pretty easy to like, so if nothing else that quickly built up rapport might offer something to keep you watching the series beyond these early episodes.

As a whole though, these first three episodes of Mangirl are an exercise in mediocrity - the manga industry is plenty interesting enough to offer up plenty of material, be it comic or otherwise, but somehow this series just managed to take advantage of any of it, instead sticking to ideas that have been done (and done better) a thousand times before.  There are probably worse ways to spend three minutes of your week, but there are certainly also myriad better ways you could spend it too - by reading a few pages of Bakuman, for example.

You can currently watch Mangirl in streaming form on Crunchyroll.

5
A visually decent outing that inexplicably struggles to derive any good comedy from a premise rich with possibilities.
COMMENT AND DISCUSS
blog comments powered by Disqus