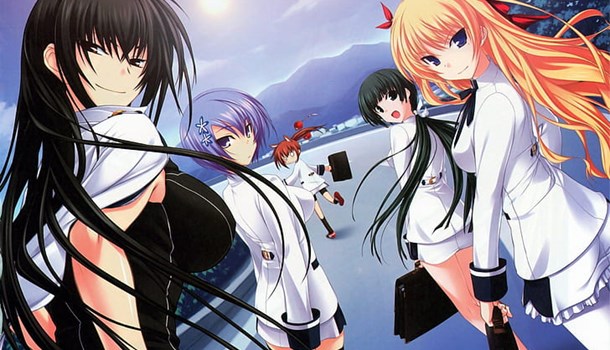 Fan-service oriented fighting girl series have been pretty popular for quite a while now. They tend to be short series with little to no pretentions to be anything other than what they are with big action, big breasts and big..... erm, casts. Majikoi is the first such series to hit the UK in a little while, so the big question has to be whether it can overcome the formula which tends to produce fun but forgettable series to bring something new to the table?

Kawakami High School is an establishment that is unique in one specific way – all disputes are settled by martial arts duels. Should there be a number of people involved, then classes can unite into improbably huge armies to attempt to wrest victory from the hands of their opponents. Yamato, our leading man, is introduced as the strategist during one such battle. He’s tenacious but not much of a fighter himself, though this isn’t much of an issue as he’s friends with the school's best female (of course) martial artists. And a robot. Throughout the opening episode we see a vast picture being painted where alliances are won and lost, stratagems are played out and fan service is just a term someone heard somewhere. In short, it’s excellent and has tonnes of potential and I couldn’t wait to see what was coming next and how the future battles and alliances were going to play out.

Unfortunately, it wasn’t more of the same. In fact the opening episode is hugely misleading and totally unrepresentative of the series as a whole, serving only as one large action scene where the characters can be introduced to the audience. This is then compounded when the series proper starts and you start to realise that this probably isn’t quite what you were expecting. You see, this isn’t a fighting-girls show per say - there are elements of it dotted about here and there but Majikoi is in fact a dating sim adaptation that’s a much closer spiritual successor to Love Hina than it is Ikkitousen.

Knowing this the set-up is made clear - there are five girls, and all of them want Yamato, which will form the basis of glorious fan-servicey comedy, right? Wrong. If Majikoi were a great harem comedy then there would be no real problem; opening episodes and our assumptions about a series are often undermined to great effect after all, but Majikoi is pretty much a disaster through and through. The fan service skips past erotic and titillating straight to matter-of-fact, calling to mind the shower scene from Starship Troopers. The comedy fares slightly better but that’s not really saying much to be honest. There are normally one or two decent gags in an episode (often right at the start with Miyako attempting to seduce Yamato) but they’re few and far between. As the series continues, the creators try to bring about a more structured plot around the current state of Japan in one of the most ham-fisted attempts at social commentary I can recall (Stand Alone Complex did this kind of thing in its sleep). The plot could work, but it’s been crammed into a series that it doesn’t belong in and it’s never given the groundwork that it requires, instead hoping that yelling "look some cyborg lesbians" will distract the audience.

The action sequences that are included in the series don’t fare well either, with the kind of over-powered moves that make Dragon Ball look like the Karate Kid and a reliance on imbecilic characters in the hope that the audience will fail to noticethat large chunks of animation are being re-used on a new background. Not that the rest of the animation is any better. Character designs are bland and the overall animation quality is really rock bottom, with the animators not even bothering to remember to consistently use jiggle-physics which should surely be the most basic of inclusions in this kind of show? There really is no real excuse for this kind of sloppy work these days. It’s not as if the creative team aren’t capable of doing better either - director Keitaro Motonaga worked on the School Days anime (also adapted from a dating sim) and character designer Mayumi Watanabe has Kiki’s Delivery Service and Girl’s und Panzer on her resume!

Majikoi is sadly a failure on every level; its few successes buried under its flaws. I’m perfectly willing to overlook a flawed series if it can bring just one thing to the table that’s either done perfectly or is massively original but there just isn’t anything here that’s worth your time. If you want a good fighting girl series then grab Ikkitousen or even Samurai Girls; if you want harem comedy then even the sub-par anime adaptations of Negima and Love Hina will serve you better.

3
A failure on every level. Don't bother.