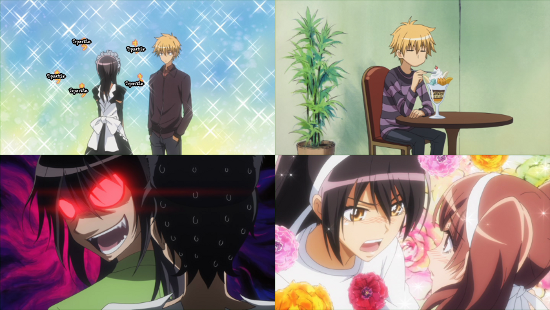 Misaki Ayuzawa is a girl with many balls in the air. The president of the student council at a former boys school now turned co-ed, she has to deal with constant opposition as she tries to drag the school up from its current sorry state. Sadly her home life isn’t much better, with her family shackled to a massive debt left by her deadbeat absentee father. To help out with this, she works an embarassing but thankfully labour-light and well paid job - a waitress at a maid cafe. Sadly one of the more notorious students from school, Takumi Usui, finds out about her part time work, delights in his discovery, and makes Misaki panic. Can she hope to keep her reputation intact? Besides which, why does Usui suddenly have an interest in her?

The premise of the show is a rather flat if fertile concept at its core, and I settled down expecting to see it stretched out across the series with the power of Romance Misunderstandings. Imagine my surprise when the show then decides to instead barrel straight through this premise in the course of the first episode and tie it all up with a bow by its end! From episode two onwards, Maid-sama then becomes a linear sequence of identikit romance plotlines with the odd confounding variable thrown in. The villains from the first episode become a weird gag element that exists as a time waster, and the main couple dance around each other in the usual boring manner. The main male love interest, Usui, makes a brave attempt at trying to break the deadlock early on but then (I presume) is told that there is a lot more show left to fill and has to play it off as a joke because the object of his affections loves making everything difficult.

This leads on to the core issue with Maid-sama that kills the entire show dead for me - the main character is supremely unlikable. Despite both personal attempts and the constant urging of the show, I cannot bring myself to empathise with her or care one whit about her plight as a lot of it (outside of her family circumstances) is self-inflicted. She is constantly combatative and unable to accept compromise or dialogue, to the point of undermining her own objectives. The first episode in particular is a firey gauntlet of this - the core conflict of fearing someone will expose her is entirely imagined and generated in a series of angry monologues. This happens multiple times throughout the series, and for someone who is supposed to be smart performs a whole litany of boneheaded and self-thwarting moves.

The show also constantly undermines Misaki, as whenever there is an opportunity for her to do something interesting it finds a way to rob her of it, usually in an attempt to drag out interpersonal drama or shine a spotlight on Usui. He is also little better as a character, having almost no development other than being nebulously kind, vaguely mysterious and keen to use subterfuge to hide his true character and circumstances from everyone. He fits the bizarre "ass with a heart of gold" archetype which is inoffensive but unsatisfying. I’ve been waiting for some kind of development of his character but none as yet surfaced in this first half of the series.

The fact that Misaki is an aikido master, in particular, appears and disappears as the plot deems it convenient. The one episode that she does shine in is during a subplot where Sakura, one of her close friends, has fallen in love with boy band member who is (predictably) a colossal jerk. At this point I found myself wishing I could watch a show about Sakura instead as I cared far more about her than Misaki! In fact, all of the infrequent episodes or moments where a non-main character takes centre stage sees a marked improvement in the show as there is far more to get invested in on display.

Maid-sama also makes frequent limp stabs at comedy, most of which fall flat due to how routine the gags are, and feel like filler material at best. I’m honestly having a hard time conjuring an example from my memory as none of them stick.

Another element that severely undercuts the drama is the limited soundtrack. The show uses a set of tone pieces for particular events or situations, and so manages to drain any tension or surprise out of a situation by kicking off the relevant music track just as something begins to happen. This is especially true of any kind of conflict resolution as the same triumphal track kicks in every time and from there you can easily connect the dots and slump back in your chair knowing that someone is going to sweep in and save the day. Again.

There is an English dub included here, and it’s fine - a little on the flat side but nothing terrible either. Also on the flat but serviceable side is the art for the show, which is solidly unimpressive and has a lot of markedly lazy moments present. One small trick it does pull is to have written sound effects present on the screen and have them voiced, causing subtitles in questionable fonts to spawn all over the screen if you are watching with the Japanese audio track.

After getting initially very irked at Maid-sama, I ended up settling into a pattern of simple boredom. Whether I liked it or not, the frustrating main character would keep moving through one trope-heavy plot after another with her insubstantial love interest orbiting close nearby. Much like the main character herself, there isn't much to love in this show.

Japanese and English stereo audio with English subtitles. Extras are trailers from Sentai Filmworks are the sole extra on the first disc.

4
There are much better maid romance stories out there, master.
LATEST REVIEWS