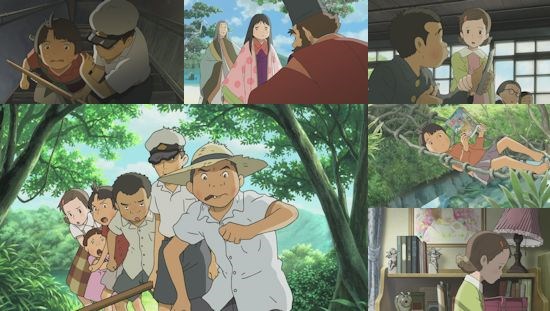 In comparison to the majority of the anime output we get to see, which keeps its focus either well and truly in the present or upon an imagined future, recent years have also seen us catch a glimpse of a number of productions that prefer to go in the opposite direction and glance back into Japan's more recent history.  While Kids on the Slope and Studio Ghibli's From Up On Poppy Hill found their subject matter in the 1960s, Madhouse's adaptation of Nobuko Takagi's semi-autobiographical novel Mai Mai Miracle dips a little further into the past, and more specifically mid-1950s rural Japan.

Our guide and protagonist for the film in Shinko Aoki, a precocious, cheeky yet smart young girl who dotes upon the tales told by her grand-father of the ancient history of her hometown of Kokura, the former site of the capital city some thousand years previously.  It's a history which still speaks to and influences part of even Shinko's daily life as the roads, streams and landmarks bear the hallmarks of her ancestor's designs, and it's this which drives her imagination about how those who have gone before Shinko lived their lives in the impossibly distant past.

Alongside all of this however, post-war Japan is undergoing changes which seem to dwarf those seen even over that thousand year stretch - this is perfectly illustrated by the arrival of Kiiko Shimazu, a transfer student from Tokyo who finds herself completely out of place in this rural setting of the 1950s.  Kiiko's decidedly western dress sense and possessions, brought about by the sudden and huge influx of western ideals thanks to the occupation of the country after World War II, clash wildly with the simpler ways of the town, bringing with it some early personality clashes.  However struck kids are with the differences between themselves and others, curiosity often makes way for friendship, and so it proves in this case as Kiiko and Shinko become good friends, with the former soon throwing herself into her new surroundings while sharing Shinko's marvels at the tales of the past.  Not everything is idyllic however, either in the Heian period of a millennium ago or the changing face of 1950s Japan, and the harsh truths of life come to visit and test both of the girls in ways that they might never previously have imagined.

It might sound a little odd, but in a way Mai Mai Miracle almost feels like two films.  Much of the movie is a charming and largely feel-good examination of a changing world that uses the ancient history of its home as an anchor but really wants to talk more about the seismic shift in Japanese life brought about by western influences - if you have any kind of interest in Japanese history it's a superb depiction of a fascinating time told from a relatively unique perspective, given that we're often used to a story focusing on the youngster moving out of Tokyo into the country rather than the view of the youngster who has always lived there meeting someone from Tokyo.  There are thought-provoking moments to be found from this view on the world and era, but the majority of the film never gets bogged down in them as it finds time to inject comedy and the like into proceedings to keep things flowing nicely.

All of this changes rather abruptly for the film's final act, which arguably tries to bit off more than it can chew and becomes muddled as a result - although Shinko's journey into the seedier side of what occupation brought to Japan feels in keeping with the film's major motif, Kiiko is left with a more surreal and supernatural trip into the past that fits into the story's broader concepts but feels unsatisfying to the point of being largely pointless, serving only to interrupt the stronger narrative still running alongside it within the movie's present day.  It's a shame that Mai Mai Miracle fails to reconcile its various elements in such a marked way, as it heavily detracts from all of the genuinely interesting points of view that it posits - if you can separate elements of its plot from the rest of the film in your head however, you'll probably come out feeling far more appreciative of the movie for it.

Visually, Madhouse have done a top-notch job of depicting both 1950s Japan and, when required, the country a thousand years prior.  It might not quite be able to boast Ghibli-esque qualities, but the film's character designs are recognisable and memorable, the scenery is stunning and the movie's direction makes it engaging and accessible while making the most of its attention to detail.  The film's audio track is also great, immersing you in the sounds of the Japanese countryside for the most part, but throwing you into a bustling den on inequity or busy palace courtyard when required of it.

In spite of its flawed final act, Mai Mai Miracle is still a film that deserves to be watched by any anime fan with an interest in Japanese culture and history (that being nearly all of them I would assume) - it tackles a period perhaps undeservedly ignored by too much of the country's animated output, and does so in an engaging way that does a superb job at laying out the culture shock of the time in an easily accessible way.  With a lovable main character and enough moments of drama and emotion to keep you entranced by her journey, there are hooks on show even for those perhaps less interested in the history and culture of the period - this is a very good effort from Madhouse, that is just some poor narrative decisions away from becoming an absolutely great one.

Mai Mai Miracle is being screened in locations across the country as part of the Japan Foundation Touring Film Programme from February 1st to March 27th 2013.  More details on screenings can be found on the official web site.

7
The film loses its way during its final act, but Mai Mai Miracle is still a fascinating and frequently fun period piece that deserves an audience.
LATEST REVIEWS