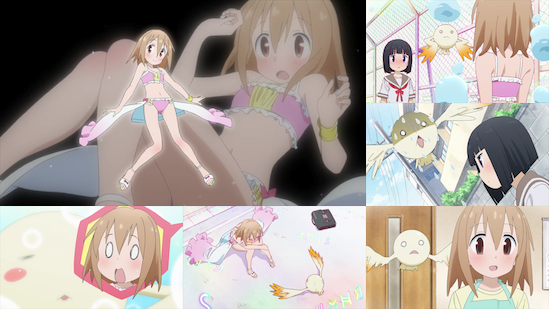 If there’s one thing that anime has especially taught fans in the past few years, it’s that being a magical girl isn’t always sunshine, rainbows, and cuddly talking animal mascots. From the cross-dressing antics in Is this a Zombie to the bleak lives of the Madoka Magica cast, sometimes the world just seems to have it out for these extravagantly dressed champions of justice. As such it’s a bit surprising that sometimes they don’t just turn around and quit, which is exactly what Mahou Shoujo Nante Mouiidesukara (which quite literally translates as “I’ve Had Enough of Being a Magical Girl”) is all about. Based on the manga series of the same name, the show is yet another addition to Crunchyroll’s growing library of shorts – with each episode only around four minutes in length.

Fourteen year-old Yuzaka Hanami seems like your average Japanese girl. Her mother doesn’t come home much and her dad works long hours, but she seems happy enough on her own and has plenty of friends to support her. However her life changes when she meets Miton – a strange creature which he claims she shouldn’t be able to see, prompting him to explain that she has the potential to become a magical girl! Yuzaka willingly goes along with the idea at first, but soon discovers that the reality isn’t quite like the television shows she grew up with. Unfortunately for her, quitting isn’t an option either.

A very short run time can be a very difficult thing to manage, especially if the show in question is a comedy. At a mere four minutes there’s only really two real choices – skip exposition and reel the jokes in thick and fast or instead play the long game, building up to one big joke at the very end and hope that it pays off. The first episode of Mahou Shoujo Nante Mouiidesukara opts for the latter, painting a rather generic slice-of-life scene before Yuzaka encounters Miton for the first time. This encounter plays out just like every other magical girl series opening until Yuzaka’s transformation sequence, where she’s shocked to find that her trademark magical girl costume will, rather embarrassingly, be a swimsuit.

That’s it. That’s the entire joke of the first episode. A joke that will likely immediately deter some viewers with underage fan service, while others are mostly left scratching their head asking themselves “was that it?” The next three episodes don’t really shed much light on the rest of the story either, instead opting to make the kind of tired jokes that every other comedy anime out there makes. Aside from a nice little joke about magical girls “expiring” at the age of 16 (as Miton says, they can’t exactly be girls forever can they?), the magical girl aspect of the show is barely progressed at all. There’s no denying that the runtime doesn’t exactly leave a lot of room to develop, but each episode should at least have some sort of punch to it otherwise they fail as stand alone products.

In some circumstances failed attempts at humour could be offset if a show was at least visually pleasing, but unfortunately there isn’t much on offer in that department here either. That isn’t to say Mahou Shoujo Nante Mouiidesukara is in any way a bad looking show – aside from some off-looking faces in the first episode it’s certainly serviceable, but that’s about the best it can muster. All the opportunities to make a big artistic impression are squandered, admittedly sometimes for the sake of a joke (i.e. no elaborate magical girl costume) but others for no real reason at all (source material accuracy or not, Miton is just a sphere with wings and that isn’t eye-catching). The best-looking part of the show is in fact the opening sequence, which offers bright colours and a storybook aesthetic that haven’t shown up in the actual show as of yet.

A title like “I’ve Had Enough of Being a Magical Girl” creates the impression of a show rife with parody potential, but so far Mahou Shoujo Nante Mouiidesukara has shown very little promise of being able to capitalise on this properly. Whether it’s the fact that the episodes aren’t quite long enough to feel like more than just a flash in the pan or that the jokes simply aren’t that funny, each episode has very little to offer and as a whole generally feels like a show that will be completely forgotten all too soon. Mahou Shoujo Nante Mouiidesukara may perhaps have something more to offer when it is completed and the episodes can be watched in rapid succession, but it certainly doesn’t feel like one worth investing in on a weekly basis.

You can currently watch Mahou Shoujo Nante Mouidesukara in streaming form on Crunchyroll.

4
'I've had enough of watching this show' might be a more appropriate title.