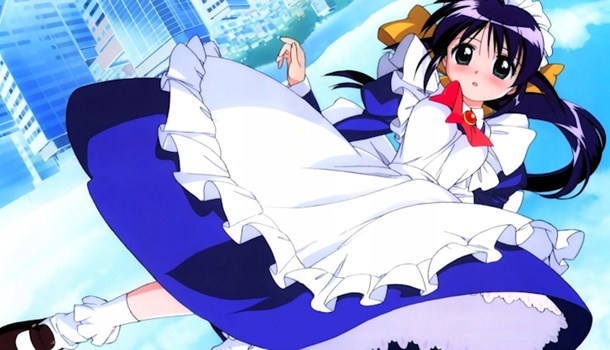 BREASTS! That one word sums up this anime. In true Gainax style, this anime is about comedy, a smidgen of romance, fan service by the panty load, and well, breasts. But, unlike most fan service anime I have been embarrassed by (and let me tell you, this is no short list!), Mahoromatic is very enjoyable with a very minimal embarrassment factor.

The series starts off in a war zone. An alien invasion is afoot and a single force, Vesper, can save the world. Their lead warrior, an android saves the world and kills the enemy champion. Upon saving the world, the warrior is told of her life to be, her remaining operational time, measured in days. Vesper gives her freedom to do, or be whoever she wants to be. Enter Suguru. Suguru is, to put it in a nice way, a bit of a loser. Enter Mahoro. Mahoro becomes his maid after making her wish to Vesper. It does become apparent as the series progresses that it was meant for Mahoro and Suguru to be together.

With the series being of this genre, it can never take itself too seriously. There are boob jokes, hundreds of them, literally 5 references or jokes every minute. These are extremely funny to begin with, (cue embarrassment) but these do become tiresome the more often they are repeated. The series is funny, it does have its romantic moments and I have to admit that I absolutely detest Suguru’s Teacher. I may be a fan of the more ample bosoms in life, but if all women were like her, I would have to consider swinging the other way, literally, to avoid her flying breasts. Thankfully, she is the only irritating character in the series, you do get used to her, but the obnoxiousness does bite and gnaw your patience away. As with any anime based in a high school situation, you have the usual rag tag bunch of friends which in this case includes plenty of obsessive females and perverted males. These characters do provide a lot of the laughs in this particular series, and they are in my opinion, more than just minor characters.

When the series came out those many years back, it was presented as two distinct series, which overall made up a 26 episode anime with 12 episodes in series 1, 14 in series 2 which bring the anime to its conclusion. Currently, ADV have brought out volumes 1 – 3 of series 1. The way these have been presented (volume 1 of 3 for example) does make me wonder if we shall see the second series any time soon. The second series does consist of more of the same; more comedy, more breasts, more action with the new alien enemies who do arise through the series, and of course the inevitable conclusion to the series.

Overall Mahoromatic is highly uplifting. The first thing I noticed, apart from the abundance of breasts, was the split atmosphere. Overall, the series is fluffy, cute, and hilarious. The action scenes depicting Mahoro’s past battles, her experiences with Vesper and her encounters with the future enemy are put in a much more sinister light, which has a completely different feel. This does make the anime seem much more alive as it does add some level of unpredictability which I always find refreshing. The single most depressing part of the entire series is the life counter. Mahoro’s lifespan is limited. She did choose to live for 398 days as a maid, but, by the end of the first volume alone, we are into day 360. Being continuously reminded of this is depressing, and I would rather be completely inept of the whole life span thing that be constantly reminded. I personally feel it spoils the flow of the series as a whole.

My one bit of advice to you prospective viewers is to choose the audio track what you want to watch the series in. The English and Japanese dubs are both very well presented, with very reasonable voice acting on both accounts. The voices fit, there is emotion, but, you cannot interchange between them. On some animes, I can happily switch between the dub and sub depending on what I am doing. On this, you can

8
More breasts than you can comfortably handle with one pair of hands, great laugh all the way through.