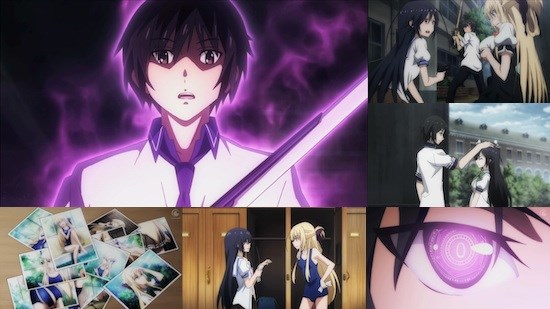 “Magical Warfare” - Sounds a bit apocalyptic doesn’t it? I’m picturing massive battles with witches and wizards hurling around powerful and deadly spells with abandon. Well, so far at least, that’s not what you get with Magical Warfare. Though, it may well turn out that way if the Ghost Trailers get their way. Their actions have already caused the splitting of the magical “ruined world” from the regular human world some time prior to the series start, as well as the disappearance of the evil wizard who perpetrated it all.

The Ghost Trailers are introduced as the series’ main antagonists, whose goal is nothing less than the total annihilation of humanity, because they view humans as inferior to magic users. It seems the Ghost Trailers recruit new members via some form of brainwashing, and it is that fate which has befallen Mui Aiba’s older brother. When we are first introduced to Mui she’s trying to persuade her brother to give up his new found evil ways and go home with her to Subaru Magic Academy. The ensuing chaos results in them finding their way into the human world, and it is here we are introduced to the series other headline characters.

In short order we are introduced to Takeshi Nanase, the main protagonist and kendo practitioner, his childhood friend and “girlfriend” Kurumi Isoshima, and their friend Kazumi Ida. All of whom start the series as regular human beings, that is until they meet Mui and are attacked by the Ghost Trailers. You see, in the Magical Warfare universe, mere contact with magic is enough to awaken magical powers in the young, though apparently this no longer applies once adulthood is reached. As far as premises for magical abilities go it is flimsy to say the least, but it does cause Kurumi’s breasts to grow quite a few sizes due to her transformation type magic - so the flimsy premise is ok, right?

After a quick battle with some token bad guys (who I suspect we’ll be seeing a good deal more of in future episodes) the gang are taken to the magical “ruined world”. The ruined world looks a lot like a post-apocalyptic Tokyo, Mui describes it as a place where “time is distorted”, that “both is and isn’t Tokyo”. Mui then takes the three friends to Subaru Magic Academy, where the head of the academy offers them the chance to train in the ways of magic. Along with this offer comes some fairly dry exposition to fill the viewer in on the ruined world and it’s relation to the human world, the various types of magic and the history of the different factions, including “Wizard Brace” who run the Academy.

So, we find ourselves with a ‘world’ set apart from the human world but easily accessible to magic users. A past near-catastrophe threatening to rear it’s ugly head again. A missing, presumed dead, über evil wizard. A faction of magic users who hate and want to wipe out regular humans and an Academy of Magic, backed by a strong magical faction who want to protect the humans. At this point you’re probably thinking the series sounds an awful lot like a Japanese Harry Potter, and on the evidence presented in the opening episodes you wouldn’t be far wrong there.

Thankfully there are hints at there being more to Magical Warfare than just riffing on Harry Potter’s themes - There’s Takeshi’s thus far mysterious family, and the “accident” which has resulted in some animosity between them. Takeshi’s sword (or “aspect”) and the mystery of it’s previous owner. Takeshi’s relationship with Kurumi, as well as Mui’s feelings for Takeshi. Lastly there’s the matter of the disappearance of the Ghost Trailers’ leader, 16 years ago. It will be interesting to see where, if anywhere, the series takes these intriguing threads.

Magical Warfare’s animation is decent enough, but not spectacular and falls apart a little in some scenes, while the music is competent and suits the series well. Assuming you can accept the flimsy premise for the magical abilities and the Potteresque themes there’s nothing here to prevent your enjoyment of Magical Warfare. Overall it’s a competent and entertaining series with one or two promising signs. However, with no real stand out moments to help recommend itself, it’s not one you’ll be counting down the hours for each new episode either. So watchable, but not great, is the order of the day.

You can currently watch Magical Warfare in streaming form via Crunchyroll.

5
Takeshi Potter and the Curse of the Ghost Trailers.
LATEST REVIEWS