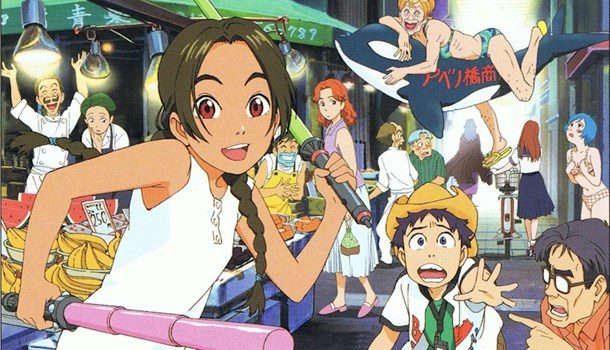 I find myself in a strange position. I'm not a fan of madcap comedy - I find slapstick humour and toilet gags largely unappealing, and therefore avoid anything that contains a whiff of it like the plague. There are notable exceptions to this self-enforced exile - anything starring Rik Mayall and Ade Edmonson (Bottom, The Young Ones) is essential viewing, but in general I avoid the genre as best I can - especially in anime, where it's even harder to take it seriously given that Japanese and English cultural references are so wildly different.

MSAA is the story of two 12 year olds who were raised in the Abenobashi shopping arcade in Osaka. Both Arumi Asahina and her best friend Sasshi Imamiya perfectly capture the spirit of preteens - loud, bratty and full of energy, not quite grown up enough to leave their love of toys and sweets behind them, but smart enough to survive on their wits and to recognise the idiocy of the world around them. The first episode finds Arumi announcing that her family are leaving the failing Shopping Arcade for pastures new, much to the disappointment of Sasshi.

However, by the end of the first episode, strange things are afoot, and the two of them are thrown into a series of parallel worlds, ranging from fantasy epics, sci fi adventure and martial arts mayhem populated by skewed versions of familiar faces - the challenge is on to make it back home in one piece and with their sanity, if not their dignity, intact.

Throughout the various worlds in which we find our heroes, the series parodies just about every pop culture reference in existence, - no genre, show, film or culture is out of bounds, and there's plenty of rewind value just trying to take it all in. Even if you don't understand every reference, there's another just around the corner, and reference or not the show is funny as hell anyway. By far my favourite scene in the series is in the Hollywood out-take, where stall vendor Mr Kouhei uses the word F**K every other word. It's puerile, pointless and incredibly funny.

The dynamic of the two leads is where the series finds its strength. Much like the best comedy partnerships, be it Eric and Ernie, Rik and Ade or Vic and Bob, Sasshi and Arumi spark off each other with an instant familiarity and genuine warmth, making the show a pleasure to watch. Even in the midst of the insanity in which they find themselves enveloped, it's the humanity (greatly helped by the fabulous dialogue) that shines through - after all, the series would lose much of its impact if you didn't care about the characters, but thankfully that's not an issue here.

The DVD's themselves are crisp and the menus nicely animated - you get the usual gaggle of ADV extras, but the nice surprise was the little magazine you find inside the packaging - written from inside the MSAA universe, its a witty little read and a welcome bonus.

The dub is worthy of note, taking a range of distinctive American accents for its characters in a bid to ape the Japanese dialects in the subbed version, it was a little hard to adjust at first but after a short while became my preferred viewing choice. The music is as lively and varied as the animation itself, and the overall quality of the package is happily top notch.

Though not an entirely original concept (see Excel Saga or the other Gainax favourite, Otaku no Video for more swipes at popular culture), MSAA is a brilliant example of its genre and a worthy addition to your collection.

10
A rare and surprising score from a grumpy old git like me, but you'd have a heart of coal not to warm to this one.