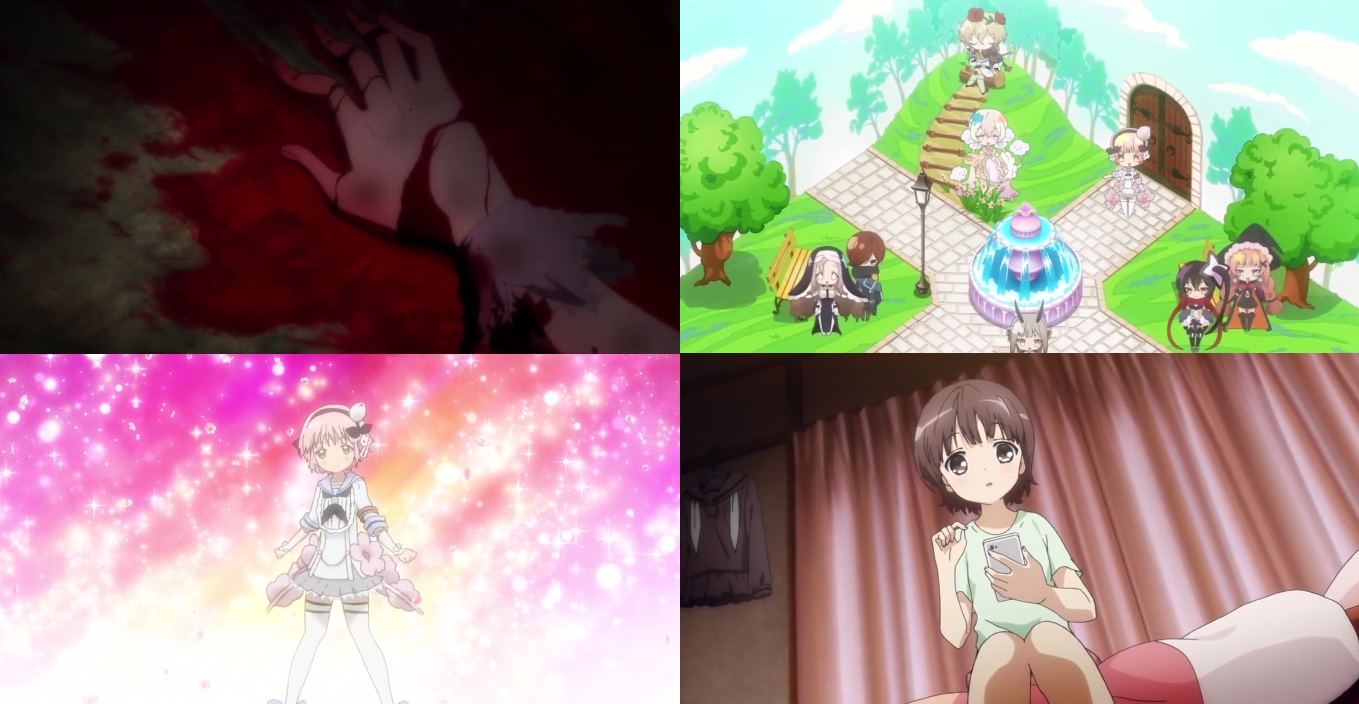 A mobile game titled 'The Magical Girl Raising Project' allows players to create a magical girl and collect candies. Having always dreamed of being a magical girl, Koyuki Himekawa is a fervent player of the social game. One day the game mascot known as Fav pops up on her mobile device, offering Koyuki what she has always dreamed of: the chance to become a real magical girl! Koyuki accepts, and from then on has the capability to transform into the alter ego she created in the Magical Girl Raising Project. Not only does she now possess the appearance of her virtual alter ego, but also has extraordinary physical as well as magic powers.

There are no scary monsters or enemies to fight here though. Instead, the duties of a Magical Girl are simply doing good deeds, which will be rewarded with Magical Candy. This Candy is a virtual currency, collected on the Magical Phone all Magical Girls carry in order to keep count of their candy and to communicate with each other via chat. The district Koyuki resides in has a total of sixteen Magical Girls, some working together whilst others choose to operate alone.

Apart from a bloody opening scene, the series starts innocently - like most magical girl anime, we see the main protagonist transforming into a beautiful but battle-ready girl with magical powers, donned in a gravity-defying outfit complete with brightly coloured hair. Viewers follow Koyuki as she learns about her newfound powers and duties that come with being a magical girl. However, the story shifts when Fav announces that there are too many Magical Girls in this district, meaning half will have to go. Whoever collects the least amount of candies in a week will be stripped of her powers, and this will continue weekly until there are 8 magical girls left. Initially expecting to merely lose magical powers, the Magical Girls are shocked when they find out losing your powers also means losing your life.

Magical-Girls-Gone-Wrong is something many may recognize from Puella Magi Madoka Magica. The main characters in both series are somewhat similar: both selfless and somewhat naive girls who want to be magical girls solely to help others. Even Fav is decidedly similar of Kyubey - both cute creatures who seem to lack any form of empathy. However, to deem Magical Girl Raising Project as a mere copy of Puella Magi Madoka Magica wouldn't be fair; whilst the they may cover the same themes, Magical Girl Raising Project has enough unique points to differentiate itself. Whereas Madoka Magica has the magical girls working together, this show has the magical girls turning against each other, especially when Fav reveals the girls can steal Magical Candy from each other, that what started as a fun social game changes into The Hunger Games. Another unique aspect of the series, is the diverse cast; since chosen players turn into the customized character they have created in the mobile game, each magical girl has her own exclusive appearance and powers. This certainly makes for interesting battles.
Most anime featuring magical girls sees the groups working closely together, bonding and forming friendships for life. Magical Girl Raising Project on the other hand sees girls distrusting and drifting apart from each other. Instead of forming friendships, most girls choose to keep their real identity a secret. Because players transform entirely into the character of their own making, their real identity is relatively easy to hide - in real life, they can be of any background, age, or even gender. Each episode covers one of the characters, revealing their backstory which also explains why they choose their name and powers as a magical girl. You may even find yourself empathizing with a few who you disliked before. But don't get too attached - in this sudden death tournament, nobody is safe...
With rules becoming more sadistic, some magical girls change for better or worse. This adds a realistic aspect to the series; these magical girls aren't perfect, they aren't all brave warriors. They get scared, insecure, or may find themselves doing things they never thought they would be (morally) capable of. Stealing Magical Candy and even murder seems to become a norm rather than an exception. Some of the girls try to keep the peace by forming bonds, whereas others become wicked and try to overthrow others. Old and new feuds and unlikely friendships are forms, but nothing seems sacred; faced with danger, everything could change on a whim.
Overall, the visuals of Magical Girl Raising Project are bright and vibrant. Characters are depicted in a realistic way when in their own form, and befittingly cute and colourful in their magical Ggrl alter-ego. Since every girl has her own exclusive skills, their designs are unique and suitable to their powers. Just like the story, the art also suddenly shifts from bright to grim - battles are bloody and unlike other magical girl anime, the heroines won't walk away with just a scratch.
Magical Girl Raising Project provides a unique and engaging story - the plot twists won't blow you away, but there are enough cliffhangers and unanswered questions to keep you coming back for more. As the rules of the game become increasingly twisted and characters dropping like flies, we are hopefully in for a wild ride as the plot further unfolds.
You can currently watch Magical Girl Raising Project in streaming form on Crunchyroll.

8
Magical girls turn against each other in this murderous battle for survival.
COMMENT AND DISCUSS
blog comments powered by Disqus