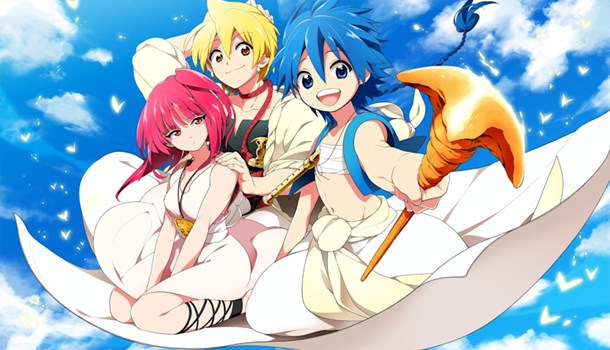 Magi is a series that I have heard a lot about through the wonders of Twitter and message boards - people would mention the show semi-frequently and given that the series is getting an animated adaptation this season I thought I may as well have a look. Can the show live up to the praise of its fans and, perhaps even more demandingly, its bombastic opening animation?

Very loosely based on the famous work “One Thousand and One Nights”, Magi follows the adventures of Aladdin, a young lad with a magical flute that can summon a giant blue djinn (not genie, djinn) to do his bidding. Sadly this djinn doesn’t speak, so you won’t get any Robin Williams wisecracks here. Aladdin meets Ali Baba, a downtrodden brown-noser who hopes to make his fortune and live the good life and together the two of them explore a treasure filled dungeon, one of many that have appeared in the recent past and which promise great power and riches for whoever can conquer it. In doing so they set into motion a journey of self-discovery about the nigh-legendary “Magi”, kingmakers of the world.

Magi has some really good ideas in it, which I want to make sure I take the time to praise. The setting is an abstracted congregation of assorted historical civilisations, something that you rarely see attempted in anime. It brings to mind various large-scale fantasy works where you have thinly-veiled renamings of previous societies, and is certainly more inventive than being set in a high-school. While the designs and the art aren’t going to blow your socks off, they have enough consistency and competency to give a fully realised impression of the Arabian city/Mongolian Yurt village/whatever else they present. The thing that throws them off somewhat is that while the backdrops and background characters all look believable, anyone with a hint of relation to the plot looks like, well, an anime character, which utterly breaks the immersion due to outlandish they look.

The main cast, while not all perfect, are an interesting bunch of characters that you want to follow the adventures of - the show opening especially does a great job of selling you on the various actors in the show. They have some great interplay, although sadly the moments where they can explore these relationships are rather few and, at times, far between. The show also makes a decent attempt at including issues that some productions may be happier to gloss over or ignore entirely, such as slavery, racism, abuse of power, and other weighty concerns. When it works, which it most certainly doesn’t always do, the inclusion and consciousness of these issues certainly raises the show above the level of a mere lighthearted fantastical production.

The thing that ruins these and all other positive aspects of Magi is the execution, which is utterly wretched and frankly frustrating due to the way that it drags down the show as a whole. Everything about the show is handled with an utter lack of restraint, to its severe detriment, especially in the case of the previously mentioned serious issues. Characters vomit gallons of exposition at the drop of a hat, the main cast have plot armour thicker than a nuclear bunker, dramatic scenes are drawn out for far too long and overstay their welcome, and the villains are all so obscenely moustache-twirlingly evil that they are beyond parody. More than once I found myself yelling at the TV because events were playing out in such an exasperating, inept fashion.

As an example, there is a scene in the first episode where a monster appears. One of the main cast is taken prisoner by the monster, as is a little girl, and it intends to digest them in a horrible fashion. Oh no! The mother of the affected child wails in distress at the horror of what is happening. Main character is conflicted - he looks on and thinks “I should help!” Evil hyper-capitalist fat jerk man says “Nooo let them die, who cares, lets run!” Main character thinks “This is the way of the world. Shame.” Then, the show skips back to the wailing mother to repeat the loop. This happens four bloody times, each repetition taking longer than the last. By the end, any and all tension has been driven from the show and as the viewer I was gesticulating wildly at the TV demanding it get on with it.

This sort of cycle happens constantly in Magi, with scenes of already tenuous dramatic impact being run into the ground. The music exacerbates this by being massively overbearing to the point of hilarity. Slightly sad scene? Have some violins wailing for all they are worth! Fight scene? Have some heavy metal! Never mind that these musical pieces don’t fit the overall feeling of the setting that the rest of the soundtrack tries to emulate!

Admittedly, part of the problem with the show is the plot that it adapts for these first episodes, which constantly flits from crisis to crisis as if desperately trying to keep you interested. Perhaps the worst thing is that the show is full to bursting with dei ex machina - this, combined with the extra-thick plot armour the cast has as well as inept pacing, means the show is made completely and utterly predictable, which really sucks the fun out the the adventure. Another irritating part of this is that the show loves to split the main cast up - individually they are not all that interesting but when together they have a great dynamic in their personalities. Sadly the most you will see of this dynamic is in the opening animation, which I am starting to think may be an elaborate and very frustrating bait-and-switch.

As a final gripe, the show is terrible at humour, which usually takes the form of a lazy “character likes breasts!” gag and some skits featuring astonishingly ugly super-deformed character designs.

All of these separate issues combine to make Magi a painful show to watch, and doubly so due to the interesting elements that you know exist but that are obscured by a thick layer of garbage. The show feels insincere, as if the team making it do not know how to pull it off correctly and fail to bother putting a minimum degree of thought or love into what they are producing. A bit of competence, or a bit of simple TLC, could have made Magi a much more interesting show. As it is, what you have is an exercise in frustration that i dearly wanted to get to like but found myself repulsed by.

You can currently watch Magi in streaming form via Anime on Demand.

3
Some really nice characters, setting and ideas, let down by a massive dose of inept handling.
LATEST REVIEWS