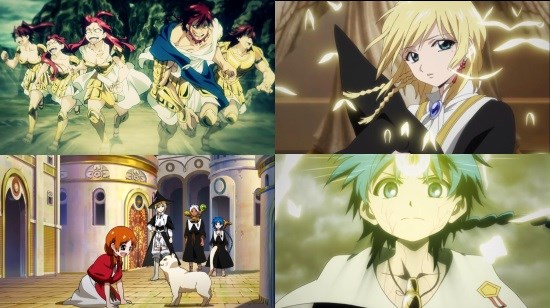 Well then, this is it. The sand has run out and Magi has reached its anime conclusion with no sign of a third season (although the Sinbad prequel series looks set to be pretty good fun next year). Like all series that end their anime adaptation runs whilst their source manga/light novels continue, the ending poses a bit of a conundrum. Do you just stop like series like Highschool of the Dead did to make a more or less seamless jump into the manga, or do you try to come up with an original ending like the first Fullmetal Alchemist adaptation? So down which path will Aladdin lead our heroes?

Picking up straight from the end of part one, our heroes remain separated on their individual quests but don't expect to catch Alibaba or Morgiana any time soon as the focus here is still with Aladdin's adventures in the magic-rich city of Horgwa...errr... Magnostadt. Now that he's ingratiated himself with the students and teachers there, including previous rival Titus, it's time for Aladdin to discover the dark secrets of this city. However, with war looming between Magnostadt and the empires of Kou and Leam, Aladdin's loyalties are about to be put to the test.

If Magi has one flaw, it’s that its story arcs never quite seem to know when to stop. The Balbadd arc from the first season suffered from this and now the Magnostadt arc - which goes on for a massively bloated fifteen episodes - is another casualty. Although there's a huge amount of great drama throughout the arc there's also a ton of flab, and several episodes could have been cut almost entirely, as could several subplots. It also has the massive downside of restricting the cast - Aladdin's as fun as ever but most of the Magnostadt bunch are pretty dull, especially Titus which is a bit of a problem given that he's supposed to be a central character to the arc's plot. Alibaba, Sinbad and Morgiana are hugely missed, so by the time they and a brilliantly fun group of Fanalis show up it’s a massive relief, though the fact that it happens during the show's biggest action set piece certainly doesn't hurt. The ending itself is also a bit of an anti-climax which, without spoiling everything, takes the form of almost a full episode of psychic mumbo jumbo after the end of a brilliant action sequence, which is something of a downer.

On the other hand though this is still Magi, which means there’s a lot of fun to be had. The comedic moments still play really well and the new Fanalis corps are such an insane amount of fun you wish they’d get their own spin-off. The biggest excitement however comes from the multi-episode action set piece which throws everything the series has got at the screen to make things as insane as possible, with everything from magical railguns to teleported mountains coming into play as various forces collide in a massive, bonkers and utterly fun battle. Its moments like this that make you really remember what you love about this show.

On the technical side of things, Kazé’s menus for this Blu-ray release are as slow and awkward as ever, though there seems to be some improvement in the second disc. It is a bit of a shame that the Sinbad OVAs (released before the announcement of the forthcoming series) couldn’t have made their way onto the disc but no doubt would have required another licence. Its also worth noting that the cover of the DVD release is a bit of a spoiler, which is always disapointing to see.

At the end of all things, the series does choose to reach a point where it can more-or-less just merge back into the continuing manga run (mostly anyway, though I’ve been advised there are a few key differences) and this is almost certainly for the best, allowing fans to continue with the story while the hope of a third season can be kept alive. Frankly, if you’ve bought the past three volumes of Magi then you’ll be picking this up regardless, but it does have to be said that the waffle that makes up most of the release makes it a bit of a disappointment tempered only by the colossal awesomeness of the big battle we’ve all been waiting for.

7
Like a beach holiday, Magi was mostly fun but you still have sand in your pants.