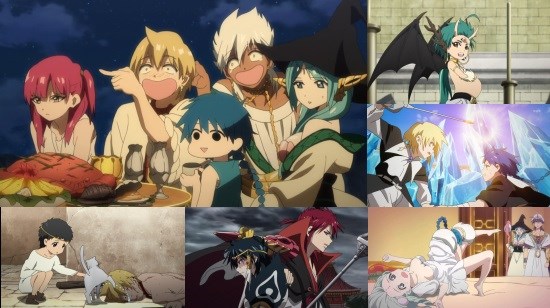 There’s Eastern music in the air, people are wearing sandals and there’s sand in my.... well you can probably fill in the blank there. That must mean that there’s new Magi on the horizon with the first volume of the second and, until literally the day I’m writing this, final season of Magi (literally, they announced the Sinbad prequel series mere hours ago!).  The first season proved to be quite the fun little affair so let’s dig back djinn (sorry).

Following the climactic battle for Sindria at the end of season one, the gang's been taking things easy for a while but all is still not well in the world and everyone is starting to realise they have work to do. Aladdin wants to train his magic to a greater extent and uncover the dark secrets that lie at the magical academy of Magnostadt, Alibaba decided to train as a stronger warrior to better use his djinn-granted powers and Morgianna desires to see the homeland of her people. Pledging to meet again they set of into a variety of new adventures all the while wary of the growing darkness of the dark magi Judar and the Kou Empire.

As you might expect it's business as usual here from another series of a shounen show, and if you’ve seen any of season one then you know exactly what you’ll be getting. Fortunately that means you’ll be getting some good fun as this is pure binge-watching, popcorn-chomping territory and you’ll happily get through multiple episodes here as you devour the new instalments and their accompanying action scenes which are all brilliant and have some great flair to them - Morgianna chasing some pirates into a hole is fantastic fun! She, of course, remains by far the series' best character as well with all the best action and gags. The rest of the gang are still as likable as ever, which is fortunate as the few new characters we’re introduced to aren’t really all that interesting with the vast majority being either one-note gags or exposition on legs, but then again you also get to meet King Kong’s Baboon cousin and watch it hit Alibaba with, well, Alibaba!

There are however some glaring issues in the plot which do cause problems. Aladdin’s arc in the magic training school brings to mind the worst aspects of Negima (i.e. the bit where they made Negi into an over-powered shounen hero and essentially side-lined all the other characters) and the pirate arc ends up tying itself in knots with the amount of contrived reasons it tries to use to explain why our super-powered gang can’t beat the snot out of a bunch of children. The Kou empire plotline, which is still supposed to be the over-arching plot to the series, gets a bit convoluted and side-tracked too so whenever they cut back to it you have to spend half an episode trying to remember what it all has to do with anything.

The animation quality is highly varied - in some scenes characters go totally off-model and then in others it looks like they had an unlimited budget to work with, though for the most part it’s pretty good. As mentioned above, the action sequences remain by far the best though and offer some of the more inventive sequences you’ll get to see in this kind of show. The new opening and ending themes are pretty nice too and as is normally the case, they show off some of the best animation in the series.

We do also have to point out that Kazé’s Blu-ray menus are as naff as ever, so if you’re looking to select any options you might want to book the afternoon off whilst the UI gets around to it. At least all the chapter markers are present and accounted for though!

Ultimately your decision on whether to pick this show up is going to be totally dependent on what you thought of season one. The Kingdom of Magic picks up right after The Labyrinth of Magic leaves off so it’s not a good jumping on point for newcomers to the series, but for established fans looking for more of the same – well, here it is!

7
One Thousand and One Nights was never this much fun!