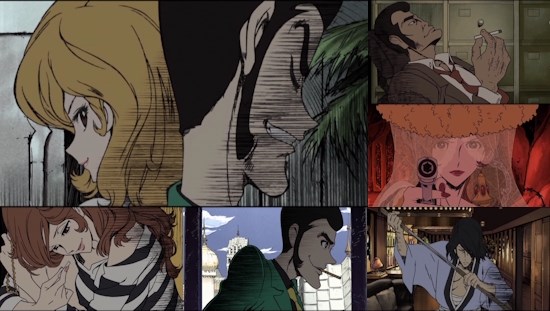 Since the late 1960s, Monkey Punch's Lupin III franchise has been a Japanese cultural touchstone, with its original manga conceit expanded upon significantly by numerous animated series, OVAs and movies. When even the likes of Hayao Miyazaki have had a crack at depicting the adventures of the world's greatest thief, is there any further ground left for the franchise to cover?

Cue The Woman Called Fujiko Mine, which takes the much-loved major characters from the world of Lupin III, thrusts them into the darkest, grimiest crevices of that world and then takes a step back to observe its characters on their various misadventures. With character designs by Takeshi Koike (of Redline fame) and an art style with an obvious love of charcoal, this is Lupin et al as you've never seen them before and a far cry from the cartoon capers of thievery to which you might be more accustomed.

The series begins with a decidedly episodic outlook, starting out with Lupin and the real star of the show Fujiko Mine as they duke it out over a treasure in the hands of a pseudo-religious cult. This meeting of two master thieves sets the scene for what is to come, with Lupin desiring to make Fujiko his own while their paths cross over and over across various criminal activities, all of which seem to end with both of them left empty-handed. Along the way, things are fleshed out with the introduction of the rest of the cast, from sharp-shooting Daisuke Jigen to expert swordsman (and comedy foil, more often than not) Goemon Ishikawa, while the pursuit of detective Zenigata is never too far behind with his all-encompassing desire to see Lupin incarcerated.

The good news here is that virtually all of these episodic instalments are great in their own right as standalone stories - ignoring one episode which mis-steps by planting Fujiko into an interpretation of Cuba circa the infamous Cuban Missile Crisis, Fidel Castro and all, which stretches its credibility far too thin within its larger than life constructs, there are strong characters and plots to be found throughout, complete with some delicious twists and turns to keep you on your toes. Aside from Lupin and Fujiko, the rest of the cast also enjoy just enough focus to flesh out their individual characters and motivations to ensure that they never feel superfluous even when the story brings its focus back around to Fujiko herself.

As you might expect given the show's title, it is indeed Fujiko that becomes the centrepiece of the series, with the second half of the show delving into her childhood and history - slowly at first, as things being to unravel for this femme fatale during the course of otherwise episodic events, before becoming the central pillar around which everything in the series revolves as her psyche all but collapses entirely. The bizarre nature of Fujiko's past provides some incredibly surreal and rather disturbing imagery - a motif that the series makes good use of as its drug-induced nature pulls us through to a finale that cuts right to the chase of Fujiko's existence in a quite delicious manner that turns some of the ideas built in the lead up to its climax on their head.

In story-telling terms then, The Woman Called Fujiko Mine is a unique but constantly satisfying affair, and that sense that this is something decidedly different from the norm also extends through to its visuals. Heavily stylised with thick outlines, charcoal shadows and simplified character designs, the aesthetic of the series is certainly an acquired taste but one that works in its favour provided your happy to embrace its daring to be different. In short, it's a perfect companion to the film noir-esque stories and style of the series, and when it delves into Fujiko's unwelcome memories in particular it creates some striking scenes that aren't easily forgotten. Unfortunately, at times this specific style also shows a less pleasing side to its execution, that being corner-cutting to keep the show's budget in trim - at times characters drop disappointingly far off-model while at others scenes look rushed and a little sloppy; thankfully this is never enough to derail the series entirely but such moments do stand out in a series that also delivers some wonderful action set pieces and moments that accentuate its style.

Also an acquired taste will doubtless be the attitude of the series towards nudity - Fujiko herself spends a lot of her time wearing little to nothing, but it's so perfectly fitting with her mind-set and way of living that it never feels excessive even when it probably is in hindsight. Fujiko is a sexual being who is well aware of, and comfortable with, the potency of her own body, so why wouldn't she parade it without a care in the world? Without giving too much away, the ending of the series actively tackles any questions as to whether she is being objectified to the extent where it actually becomes an important facet of both the story and Fujiko's character, which is in itself fascinating in a medium that too frequently casually tosses fan service around with no end goal other than to titillate.

Musically, the series is also superb - with music produced by Shinichiro Watanabe it perhaps isn't surprising that the show's soundtrack fits its style and content like a glove. It's sleazy and decadent when it needs to be, before switching to engage in an all-out aural assault to accentuate Fujiko's disturbing memories. Even the show's opening theme perfectly encompasses the thoughtful extravagance of the series as it waxes lyrical about its star's psychology, while its ending again provides a sense of the raw sexuality at work within its confines.

With those interesting visuals and colour palettes, we imagine The Woman Called Fujiko Mine's Blu-Ray release should definitely look the part, but even the DVD version we received for review here is no slouch - it looks good throughout and exhibits no issues of note, with comprehensive and error-free subtitles to boot even if the use of German words in-place of their English equivalents feels like a curious stylistic choice in a couple of spots. In other words, all is well with this Manga Entertainment release on a technical level, although we have to admit that we're none too keen on the English dub (curiously provided as a stereo track here rather than the 5.1 surround mix on the US release) which is far too flat compared to the range and energy of the original Japanese performances.

If nothing else, The Woman Called Fujiko Mine is one of the year's most interesting releases - unique in both style and substance and unlike anything else you'll watch this year. Thankfully, this series has more strings to its bow than looking different alone, and provided you aren't immediately put off by its aesthetic then there are some superb stories and wonderfully strong characters to be found here. A show that dares to be different like this deserves to be rewarded, and in return for picking up your shelves will be graced by a fascinating series worthy of multiple views. As we've already mentioned, this is the world of Lupin III as you've never seen it before - after watching this series, you may never want to go back to those more traditional offerings within this franchise.

8
Unique visuals are complemented by sexy, gritty story-telling and strong characters to create a series that feels fresh and dares to be different.
LATEST REVIEWS