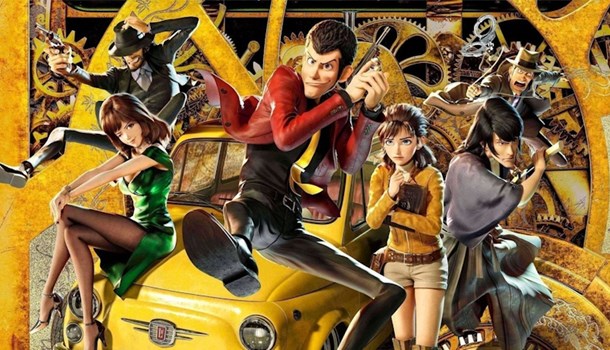 The grandson of legendary “Gentleman Thief” Arsene Lupin, Lupin III, finds himself in a race to unlock a mysterious diary and beat a mysterious organisation to an ancient weapon.

Oh, I have been waiting for this! Lupin III is one of those iconic manga & anime characters whose adventures are always eagerly anticipated – for me the pre-Ghibli Castle of Cogliostro remains one of my favourite animated films, and I thoroughly enjoyed Lupin III: Part IV – so when the first trailer for this all-CGI adventure starring the master thief’s crew and their eternal nemesis Inspector Zenigata dropped and looked stunning, I was hooked. Sadly I missed the limited theatrical release it received here in the UK, but now it’s out in what I honestly think is one of All The Anime’s better Collectors Editions.

Now the film itself is a classic Lupin III adventure – Lupin tries to steal something, Zenigata rolls up, there’s a damsel - not so much in distress but in need of Lupin’s skills if not his more leacherous tendancies – who'll only appear in this adventure, Fujiko screws up Lupins plans, Jigen & Goemon save Lupin’s ass, and some truly reprehensible villains appear who end up getting their comuppance. It’s a formula, but goddamn if it doesn’t work gangbusters as this is a really fun slice of action adventure. And the bad guys are Nazis. Everyone can get behind taking down Nazis.

Most obviously this is the first time Lupin & co have had their adventures translated into a full CGI feature film as opposed to traditional animation, and if you worried about how those iconic character designs would look in 3d then be at ease as this film looks AMAZING. There is a slight moment of uncanny valley at the start, but that goes away quickly as the team behind it have clearly worked to make it as fluid as possible and have infused it with a lot of charm. Now I wouldn’t expect all attempts to do this to look as good, but given Lupin III’s stature in Japanese popular culture, and how seeing Lupin enter the world of 3d animation was one of creator Monkey Punch’s last desires for the franchise prior to his passing in 2019, it’s clear there was money and genuine affection for the characters applied to this project in equal measure. If I did have to single out one niggle it would be that the shift to 3d makes it somehow a bit more noticeable when the English dub does not quite match up to the movement of the characters mouths. It’s a little thing, and again you will stop noticing after a while, but it was something that struck me from the start.

Speaking of the dub though, the classic English-language dub cast are back, most notably Tony Oliver as Lupin and Richard Epcar as Jigen, and – as ever - they all kill it as only actors who have been performing characters on & off for decades can do. The real question is always how the guest players do, and I’m happy to say that Laetitia makes a fine heroine, established from the off as a potential foil to Lupin with skills almost equal to his own, whilst Lambert & Gerard are a fine pair of villains, one fuelled by professional jealousy, the other by nationalistic fervour, and you really can’t wait to see them get their comeuppance (spoilers – they do).

The film itself is a breezy and fun action adventure that blasts through it’s 93 minute run time, and what may not be obvious to newcomers is Lupin III tends to be broken into eras that are delinated by the colour of his jacket – red, green and blue. Red tends to be the colour of adventures earlier in his career and this film leans hard into late-60s technology and James Bond-esque set piece action scenes, and absolutely nail’s it. At the same time though it has a lot of heart – there are some neat callbacks to Lupin’s grandfather, and Laetitia’s whole arc is tied to her relationship with grandfather.

The bonus features are plentiful as well: you get trailers, CG models and a couple of neat round-table discussions, one featuring the English voice cast, the other with the Japanese cast and director Takashi Yamazaki. The English roundtable is pretty fascinating as it gets into some of the production side of things that Richard Epcar is more familiar with as the long-time director and writer of Lupin dubs.

In terms of physical content the package comes in the now-standard thick card slipcase that features the main poster art for the film with some spotgloss on the heroes. You get the film on Blu-Ray & DVD in a plastic case with the cover mimicking the exterior and interior of the films macguffin, and then you get what I think is something most folks might skip over, a 64-page booklet packed with character designs, storyboards and, most interestingly, comments from the designers including how they translated the characters from 2 dimensions to 3 and some of the difficulties they encountered. It’s a small addition but one I found genuinely insightful. I would though say if the booklet and hard case is not something that interests you, the standard releases of the film on separate Blu-Ray & DVD coming at a much reduced pricepoint would be the edition to scoop up.