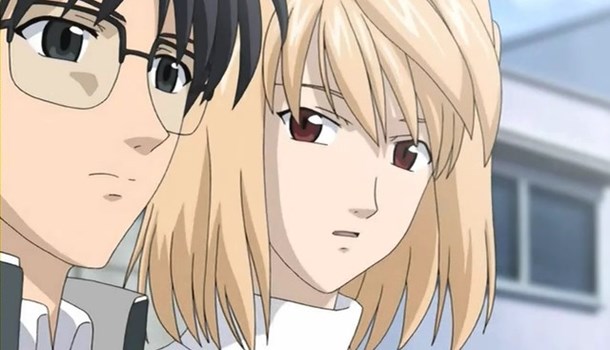 After being treated to this series on fansub back in 2003 I discovered quite rapidly that my anime taste had changed. Gone were the days of solely enjoying episodic series with little continuity which were designed solely to entertain. I discovered that I wanted, nay, needed more from my anime. Since then, if a series doesn’t have a good story, and have characters whose personality I can grasp and explore, I simply just don’t watch it… unless of course I have had a few to drink!

You are initially mislead by the tone of the story which comes out as a normal high school flick. It quickly becomes evident that the supernatural abilities Shiki Tohno has acquired (As Ross put it “Stringy-vision!”) will lead him into situations beyond his understanding. His initial encounter with the “vampire” princess of the true ancestors, Arcueid Brunestud, who not also happens to be staggeringly beautiful but also an object of his affections, leaves her in a situation where she must rely upon Shiki to complete her mission.

In an attempt to try not to spoil everything too much, I will ask you to pack some tissues for episode 11 and the finale, as they do just get a little bit teary.

The series itself is short, but by no means sweet. 26 episodes of story are artistically and concisely compressed into 12 episodes of pure delight. The series is completely standalone and begins and finishes entirely within this length. I would advise watching the series more than once simply so that all the details and the information will have time to bed in.

In comparison to previous releases from this franchise (the games) the character designs have been considerably cleaned up and the overall art style of the show is of a very high standard. There is one aspect of the show, other than the story, which blows me away… the music. The show uses a series of beautiful orchestral pieces which have since forced me to buy every single OST for the show which exists. The opening theme, of which only a 1 minute version exists, simply blows me away and leaves me dripping with happiness once it has passed. Simply beautiful.

Simply put, I love this show, and to finally see it released in the UK, with an associated boxset. For further opinion of this series, please see Ross’s pre-release review here.

Clean closing animation and sign-only subtitles (pay attention distributors, these are important - add them!). Otherwise, the cupboard is bare.

9
Sexy vampire princesses are now a fetish for me ^_^