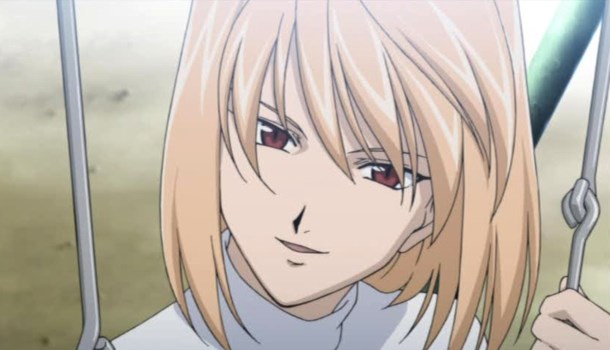 First aired in Japan back in October 2003, Tsukihime is an odd anime. Like Vampire Princess Miyu before it, the series is dark, vengeful and quite oppressive.

For example, in the first episode we meet our main protagonist, a young man named Shiki Toono, who from the age of nine is gifted with the ability to see the strings that bind all forms of life, and this gift is called the Mystic Eyes of Death Perception. Which is quite elaborate - I'd have called it stringy-vision or something ^_^

Anyway, back on track - the gift is more of a curse, and at a young age he was given a set of special glasses to give him respite from his ability and allow him to forge a normal life. However, the life he's built for himself is about to be shattered, and by the end of episode 1 he has inexplicably murdered a young woman who he found himself attracted to. Pretty weird stuff…

Happily (for the young lady at least) Shiki didn’t kill her, despite severing limbs, fingers and toes, as the lass in question is an immortal vampire. However, having revealed himself to her, he becomes embroiled in a fight against the supernatural and must fight for not only his own life, but the lives of his friends as well.

On top of his initial encounter with the undead, Shiki finds himself battling hell hounds and trying to solve the mystery of a vampire-style killer roaming the streets. He also has to move back in with his sister in the family home, and she’s definitely several shades of weird.

I have to say that I found Tsukihime hard going initially. The designs are not the prettiest I’ve ever seen, and the storyline is heavy with exposition. However, when the action gets going, it did come together with enough verve to regain my flagging interest. One of the series biggest assets is the soundtrack, which utilises some great choral sections reminiscent of The Lost Boys, and contributes more of the atmosphere.

All things considered, the show is perfect for those who enjoyed Boogiepop Phantom and the aforementioned Vampire Princess Miyu, but its not a series for the faint of heart or those that like their anime fluffy.

7
Managed to pick itself up toward the end. Lets hope it keeps getting better.