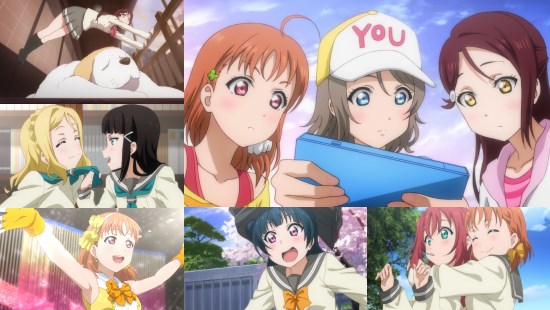 To call the original Love Live a phenomenon would be something of an understatement - Sunrise's idol series became the animated equivalent of bottled lightning, casting its net across male and female demographics and conquering all before it as it rose to prominence in a way that surely even its creators never anticipated. With the wheels on the gravy train well-greased it's a decidedly brave decision to say goodbye to µ's, the school idol group that were so instrumental in Love Live's success, and replace them after two TV series and one movie with an all-new cast. Just how do you go about recreating a smash hit while escaping the troubles of that proverbial difficult second album?

For starters, we leave the hustle and bustle of Tokyo for the sleepy seaside town of Uchiura in Shizuoka prefecture for the series, although not before a quick diversion by way of Akihabara as a girl named Chika Takami finds herself struck by inspiration as she witnesses a video performance by a school idol group that you may just have heard of...

Having been blown away by this colourful and energetic performance, the easily swayed Chika decides that she, too, wants to become a school idol. Dragging her friend You - who is convinced that this is another of Chika's passing fads - along on this flight of fancy, we begin down the journey to becoming a school idol once again with everything that entails.

If that all sounds a bit like a rehash of the original Love Live series with the "save our school" drama ripped out... you'd pretty much be right. Of course this isn't even a story unique to Love Live, as pretty much any series revolving around an after-school club goes through a similar arc of finding members and trying to persuade the school or student council president of their right to exist, but nonetheless if any series could have the guts to break the mould and try something a little different you might hope that Love Live might be it.

Another early misstep for Sunshine is its strange insistent upon shoe-horning all of its main characters into episode one in some shape or form - rather than slowly but surely building its cast, we're instead given a concentrated dose of character cameos, giving most of them little chance to do anything other than appear on-screen, shout about or otherwise demonstrate their main character trait, and then vanish again. It's almost as if the series wants to dispense with all of the formalities and get us straight to where Love Live left off with its character-centric movie, but needless to say this falls flat when we're yet to be introduced properly to most of the cast.

This odd initial feeling continues into other areas - Sunshine's deference to µ's as a nigh-on deity that can never be surpassed leaves you wondering why you aren't just watching the original Love Live in the first place, and its cast often feel like they're being shoe-horned into roles that broadly match those of their predecessors in a way that seems like another missed opportunity to break away and do something significantly different. In spite of this attempt to link the two series, I still can't remember the names of a number of key characters even three episodes in, and one of those I can remember is only thanks to her often wearing a baseball cap with her name printed on it! Again, this speaks to the clumsy way these characters have been introduced to the viewer, and you can't help but feel that Love Live Sunshine has kicked off on the wrong foot.

Yet, for all of this, there are moments where you see the glimmer of fun, satisfying entertainment that made Love Live so... loved and lively, to be honest. For starters, Love Live continues to acknowledge that it is ultimately a cartoon, and thus makes full use of that by packing every episode full of over-the-top expressions and general silliness in the name of physical comedy that only becomes more charming as the show goes on and you start to get at least a little comfortable with the main cast of characters. Episode three also suggests that the show is also working its emotional hooks into me - the formative version of Aquors' (pronounced Aqua, incidentally - no cover version of Barbie Girl has emerged yet though) first concert had a surprisingly effective emotional pay-off that suggests a series rising above its stilted start to find solid ground in the same vein as its forebear.

These early episodes of Sunshine are also the best Love Live has ever looked - the show has always hung its hat on its colourful world and expressive character designs and all of that is present and correct here, but with an extra layer of visual polish that sees characters dropping off-model far less often to give the feel of a show that has had more time and money lavished upon it. More notably, this extends into the use of CG during song and dance sequences - it isn't perfect, certainly, but it feels like a massive improvement of previous iterations of Love Live with far fewer jarring switches between 2D and CG animation and character models that look far, far closer to their traditionally animated counterparts. If Love Live Sunshine can boast one major triumph, it's making its use of CG work in a way which no other idol anime has thus far, and hopefully it's a level of quality it can continue to reach as we move deeper into the series.

Considering what a curious beast Love Live was, it isn't all that surprising to find Sunshine following a similar trajectory. It certainly feels like a series that is trying too hard to jump bodily onto the coattails of its predecessor and ends up fumbling around for a foothold as a result, but at the same time you can't deny that there's a certain something about it in terms of pure entertainment value. As of episode three, it feels like the show is finally getting to grips with the pressures of following on from a modern anime sensation and maybe even carving out something approaching its own legacy. After a false start, Love Live Sunshine has taken centre stage at last, and we'll be keeping a keen eye on the series from here to see if it can fill that stage like its predecessor.

You can currently watch Love Live! Sunshine!! in streaming form on Crunchyroll.

6
It's an awkward start for Aquors, but episode three suggests a series starting to find its feet in the spotlight.
LATEST REVIEWS