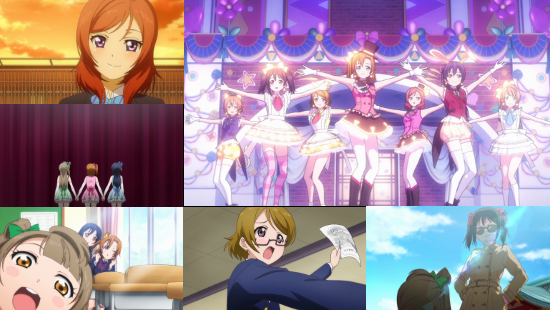 Like many poor saps, I got sucked into the free-to-play face-mashing rhythm game sensation Love Live! School Idol Festival. Still play it to this day. Now, the source material behind all those songs and free-to-play currency transactions is available in the UK. Is it something you nico-nico-need or nico-nico-not?

Her beloved Otonokizaka school is going to be closed down due to cratering admission numbers and second year student Honkers is distraught! Aghast! Inconsolable! The only way to save the school is by boosting new applications for next year, and surely there must be a way to try and get the fickle youth to apply? There is! While scouting out other successful schools she finds that one of the most popular examples has a secret weapon: a unit of students who are also idol singers. Honoka, energised, convinces her hesitant friends to join her and become idols to help save the school.

The first half of the series is pretty damn great, providing an energising series of episodes as Honoka and friends stumble around bringing their scheme to life. It sets out its stall quickly, laying out a strong over-arching storyline with a clear goal, and within that framework it delivers a lot of interesting character moments and development as well as comedy. You get a lot of enjoyable goofy moments as the group is put together as well as some surprisingly arresting moments when things don’t quite go as planned. It is during these moments, in particular within the third episode, that the series punches above its weight with a heady dose of oppressive reality.

The second half of the series, however, takes a notable dive and flounders helplessly as it constantly shifts focus and cannot maintain a decent over-arching storyline. This is especially frustrating as it already had a good plot set out but constantly tinkers with it, neuters it, undermines it, and then shifts focus entirely for the climactic arc to the point that I threw my hands in my air in exasperation. An irritating side-effect of this is that it puts the majority of the cast onto the back foot, forcing them to simply react to events rather than fully engage in the fleshed out manner that they had for the first half of the series.

The character arc for student council president Eli is especially poor and feels forced - while the series lays out the dilemma facing her and the confounding variables well the resolution is an utter mess, like someone thought “Well, we have to get her into the idol unit anyway so just force an ending here.” These moments, and especially the limp ending arc, are almost enough to sour the whole experience of the series due to how much they squander the potential present and that was released earlier on in the series. It is during these inelegant moments that the “severe” nature of the franchise shines through, illuminating the carefully engineered marketing machinery that exists to tug your moe-addled heart strings and empty your wallet. How much this bothers you depends on the individual, and it’s important to remember that this always exists, but personally I’d rather not be actively reminded of it!

The animation in the series is top notch. All of it looks lovingly done, characters and backdrops both. The standard is set high and barring a few exceptions (including one of the introductory freeze frames, oops!) the show looks marvellous. For a small example that I kept coming back to is the way that Maki idly plays with her hair - a small but awkward thing that is always well presented.

Sadly not all of the visuals look great - during dance sequences the animation often switches to sterile and rather off-putting CG. This is not a new development in the field of anime dance numbers, but the way Love Live tries to blend in the CG makes it pop out all the more as the CG scenes are interlaced with the normal animation and this only enhances the gulf between the two styles, switching back and forth over the course of a song. The CG simply doesnt look as good as the normal animation, giving everything a too-clean look that makes everyone look like your PVC figures have come alive and started dancing. It looks too exacting, too clinical, too sterile. It’s a shame as the dance numbers are where the show tries to do its best choreography and scene framing, and this is easily ignorable as you play the “Where’s the CG? Theres the CG!” game.

The picture provided by the DVD release under the microscope here looks good - it loses some detail in the more bombastic song and dance numbers but you don’t otherwise feel like you are missing anything due to the format. One thing it cannot handle however are the rapid 360 degree spins present in the show, where the screen is rotated in a very quick movement that the disc cannot keep up with and turns into a chunky mess - thankfully these are few and far between, as well as generally being absurd anyway. Sadly, I do have a bone to pick with the subtitles though - in cases where you have both a song and speech occurring at the same time, both items are presented in the same yellow font and have an unfortunate habit of both swapping places and popping in and out. This makes following them a confusing write-off, which is a shame as this could have been remedied by using white text for one of the two trains of dialogue.

The music, as one would hope for a series so wedded to it, is good. The idol songs vary from merely okay to pretty great (Wonder Zone!) but sadly there are no stand-out exceptional numbers. If you have any trauma flashbacks from playing the aforementioned mobile game this may also effect your enjoyment. The non-song background music is very good and is used to great effect, especially during the more emotionally fraught moments where it helps enhance the scene. One weird thing that must be highlighted is the bizarre guitar twang sound effect the show frequently uses during transitions or comedy moments - it reminds me of cheesy US sitcoms or parodies thereof.

Love Live is a weird series to try and sum up my feelings on. I like the cast a great deal, but the series simply doesnt live up to this on balance. The first half, as mentioned, is great - a slick, massively enjoyable romp with laughs and pathos in spades. Then the series takes leave of its senses and devolves into a forgettable mess, squandering its characters and setup both in a keenly frustrating bungle. As it is, I can only really recommend it to those who have already bought into the franchise in a big enough way to overlook these faults.

Japanese 2.0 audio with English subtitles only. Extras comprise clean opening and ending credits and TV trailers for the series.