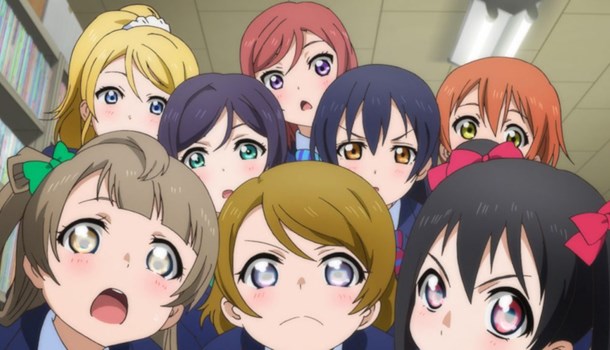 Idols are a big business in Japan. They do everything from singing and voice acting to spending six hours shaking hands. They work hard (for little reward if the darker rumours on the industry are to be believed), so it’s no surprise that idol fans are catered to in the anime arena too. Such shows tend to be very formulaic rags-to-riches style shows (bar a few exceptions) so can the latest of these break from the pack?

In the garden of maidens that is Otonokizaka Academy things are not well. Low numbers of prospective students means that only a single class of new students has been accepted and the school is to be closed once all the current students have graduated. Honoka, our leading lady, discovers that other schools have created idol groups to promote themselves and bring in more students. Knowledge in hand, she proposes that she and her friends become school idols in an effort to save the school. When the school council rejects the proposal the girls decide to go it alone and commence their own training in singing and dancing, search for the right song and perform at their first concert. On the way the series will not so subtly introduce the raft of characters who’ll be joining the group in future episodes. Going forward we’re all but certain to see the classic episodes where they are snubbed by the other idol groups, make new friends, are finally accepted by the student council and finally saving the school.

Love Live is pretty much as formulaic as it could be, and honestly there’s not really anything wrong with that (I happen to quite like this formula) - the thing is that the series is quite bland at this point, particularly when you remember that iDOLM@STER had its anime adaptation not too long ago and did everything bigger, better and with a much higher budget too. Unfortunately the series somehow manages to ignore the lessons that could have been learned from other idol shows and the series suffers from it with several issues that should easily have been avoided.

Take the animation - it's not spectacular but it’s watchable. The character designs are good and everything’s smooth and fluid. But every time a song and dance sequence occurs all the characters are suddenly rendered in CG and it feels like you're watching someone else play Project Diva. It looks cheap, its ugly and it sticks out like a sore thumb against the much better animation in the rest of the series. The fact that the series originated as a ‘multimedia project’ makes me fairly suspicious if this was done so that the sequences could be more easily lifed into a game spin-off, but as it is it’s yet another example of anime staff not quite grasping how to marry CG and more traditional forms of anime (see Tiger & Bunny for an example of how it should be done – i.e. with style!).

The characters are a nicely mixed bunch, and there’s good comedic and dramatic play between them with promise of more to come. Umi in particular is great fun to watch. However, by the midpoint of episode three the other shoe drops and you realise that a large part of this is because the role is being played by Mio from K-ON.  Umi isn’t just like Mio – she is Mio right down to her character traits and how she interacts with the other characters. Its only changes to the character model that save the show from a lawsuit! Yes, the premise of the series isn’t original and there are only so many character archetypes out there, but this really takes the cake (was that pun intended? - Ed). On the other hand, Mio has always been a fantastic character so whilst it’s indicative of endemic laziness it’s not all bad....

Otherwise, the music is the one area that’s 100% spot on – it’s made up of loud, peppy J-pop numbers which, whilst pretty much instantly forgettable, are great fun to listen to and are exactly what the series needs.

Love Live isn’t a bad show, but these issues should have been easily side-stepped and it’s annoying that they weren’t, particularly when there are so many examples in the genre that did the same thing better. It would be difficult to recommend that you watch this series over iDOLM@STER for example, lack of UK availability for the latter aside. If like me you’re a fan of the genre then it’s a good enough way to pass twenty minutes each week, but otherwise there are better shows streaming at the moment.

You can currently watch Love Live in streaming form via Crunchyroll.

5
Nothing we haven't seen before from this genre.