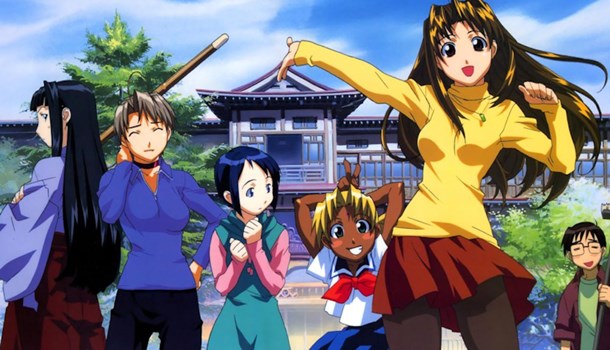 I remember when Love Hina (manga) first came out...I believe it was around the time I started seriously getting into manga...At the time I was 11 so my dad would obviously not appreciate me buying a manga with several girls in bikinis on the cover. So I never got around to getting it. Now my dad doesn't really mind what manga I read (being 13 he's only really worried about hentai and stuff like Battle Royale), but, even though it looks interesting, I have too many other series going to start buying it. However, being sent review copies of the anime was a very, very nice surprise. So, I got home, found the package with the DVDs in and ran into the living room to see what its like....

And I must admit, I was a little dissapointed. I mean, the plot's very good and an irresistable premise but...well...its just not as hilarious as it seems to think it is. Its not exactly a dry, boring piece of garbage but its not exactly Kare Kano either. For a start it seems at times too serious and at others not serious enough, making the experience slightly surreal. So, it goes from unrealistic comedy to serious down-to-earth love scenes. Also, the gags are all pretty samey. Its always the (rather predictable) "guy messes up, guy looks like pervert, guy gets beaten into next year." After a while you get into the spirit and you end up chuckling but it isn't exactly "laugh out loud" material. However, as the 4 episodes on volume 1 progressed it did improve so maybe volume 2 will be better.

The story itself is pretty simple - a guy has failed numerous times at his Tokyo University entrance exams, but one day his grandma asks him to manage some all girl dorms. Just when he thinks he's the luckiest guy in the world he somehow manages to always come out looking like a pervert and getting beaten up. Mix that in with a long lost love and its a nice plot. The art supports this with lucious drawing and beautiful shading and colours. All in all however, you might want to try and see an episode or two before forking over your money. However, anyone should enjoy it to some extent.

Oh, and the soundtrack's pretty good too.

7
A very mixed bag but more good than bad, even if it is a little dissapointing.
LATEST REVIEWS