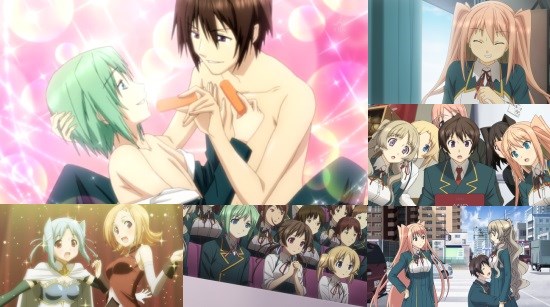 Adapting eroge, visual novels and dating sims into anime tends to bring mixed results. Given that most series don’t have Ufotable levels of time and funding to be able to adapt every different route into its own show (surely at this point we’re only a couple of sex scenes away from a fully animated remake of Fate/stay Night?) they tend to end up with a non-committal plot that tries to have its cake and eat it but just ends up with a mess down its clothes (to torture a metaphor). Eroge adaptations have an even harder time than regular visual novels, as those that aren’t made into hentai anime generally have all or most of their sex scenes, fan service and references to them removed with a scalpel, leaving the show pretty toothless and somewhat redundant. Still, there are a few works of this ilk that pull it off such as the aforementioned Fate/stay Night and School Days, so will Love, Election & Chocolate join their ranks?

Yuki Ojima (never Oshima!) lives a pretty relaxed school life as a member of the Food Research club – a club dedicated to sitting around eating snacks all day on the school's dime (it is an oddly undersubscribed club – clearly word hasn’t gotten around that they have a free beer keg). Unfortunately for him and his friends though, the clubs days look to be numbered as the favourite to win the highly competitive school council election, Satsuki Shinonome, has put their outfit on a list of clubs she intends to shut down to save money once she is elected. So the club is doomed, unless of course Ojima can pull together enough votes to make a run for the council himself...

Love, Election & Chocolate can’t really seem to decide what it wants to be. The opening scene of the show comes right out of a dark, savvy political thriller and suggests huge potential on that front before segueing into school club comedy (and let’s be honest, running for school council president is essentially as much of a club activity as K-ON’s light music club for this show) whilst occasionally dropping hints that various characters have secrets with the subtlety of Godzilla on a holiday to Tokyo. It feels like they tried to jam the storylines of three different shows together, and it doesn’t really work all that well as each show needs the room the others are taking up. The political story could have been great but it never builds up any steam thanks to the school comedy, but its constant barrage of yaoi jokes in turn can never make the most of its character gags as they have to keep hinting at why Chisato won’t eat chocolate for the show's character drama, which itself gets so sidelined by the political plot that there’s never any real development or satisfying resolution. At least one of these storylines really needed to be jettisoned to make room for the other two, and it would probably have been an idea to bring at least a bit of the more pronounced relationship drama from the original eroge into the mix as well to help get some better resolution to things.

The animation is decidedly bland and unsatisfying (leaving its Blu-ray release feeling a little redundant) and the character design tries to rely on weird visual gimmicks to get away with it even though they make no sense - the show tells us that Ojima is the only one that can see the weird visuals and then promptly never explains why or refers to it again. The voice cast all do their best, but the requirements of the show's bizarre format require them to shift gears so much that they were never going to be able to deliver a particularly solid performance.

In the end Love, Election & Chocolate isn’t a bad show but it’s certainly not a good one either. It has bags of potential in each of its various concepts, but like the gadgets that series genius Nozomi keeps coming up with the end result is far less than the build-up led you to believe it could be.

5
You won't be electing this show to the House of Lords anytime soon.