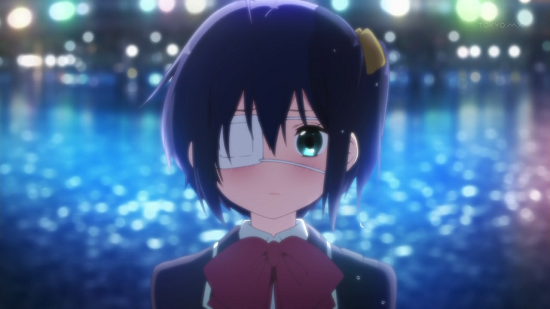 With the much hyped, but somewhat less impending UK release of Love, Chunibyo & Other Delusions! Take on Me on the horizon, fans may be looking for a chance to revisit its earlier instalments. Thankfully, the team at Kyoto Animation have done us all a favour, condensing the show’s first series into 90-minute movie that captures all of the charm, energy and soul of this much-loved anime.

When it comes to repackaging a popular series as a movie, Kyoto Animation are no strangers to the approach; Beyond the Boundary, Sound! Euphonium and Free! have all received similar treatment for their first and/or second series. On one level, I can see why these would appeal to fans; many of us simply don’t have the time or inclination to rewatch 12 episodes in the lead up to a new release. That being said, these types of movies are still retreading old ground, and it’s easy to see why some fans may not rush in, their wallets held aloft, unless the film is able to offer something new.

So how does this new movie perform, both as a refreshing glimpse of the first series and as a standalone movie? Actually, pretty well on both accounts.

One of my favourite things about the Love, Chunibyo franchise is how well it handles Rikka and Yūta’s relationship, especially in that first series. Unlike a show such as My Love Story!!, which I adore for very different reasons, it’s more than happy to meander its way toward romance, letting it develop at a very organic pace. More so, even when the romance between the pair begins to take center stage, the show never lets it eclipse the other tropes of the story. In one of the series’ most beautiful scenes, Rikka and Yūta’s confessions to one another are  backlit, both figuratively and literally, by the ethereal world at the heart of the show.

The reason I mention this is that, despite clearly being a romantic comedy, the first series didn’t just present a story about a budding romance. Rather, it also presented a much more profound message; one about finding beauty and energy in our imagination while living in a bleak and often restrictive world. As shown so well in that same confessions scene, romance plays a big part in enhancing that message, but it never seeks to totally obstruct our view of the bigger, more though-provoking picture.

So, I think KyoAni had a real challenge on their hands with this movie. Conveying this touching story, in a mere fraction of the first series’ running time, would require an almost surgical precision when it came to edits and scene selection. Alternatively, there was always the easy option to simply focus on the more romantic elements from the series, sort of like a Spark Notes for the later, more amorous second series. However, I feel this would have betrayed that more profound story, leaving us with a rather shallow, almost unauthentic, reflection of the first series.

Thankfully, Kyoto rises to the challenge with this movie, demonstrating that they are all too aware of what this franchise meant to me and so many other fans. In fact, the movie surprised me in its willingness to languish over some scenes; the station scene from episode one, one of Yūta and Rikka’s first significant moments together, gets very little abbreviation. Yet, by allowing us to linger on these moments (in what is a very condensed movie), it actually heightens their significance. Instead of perceiving these scenes in the context of each episode’s story arc, we are invited to appreciate them anew in the context of the series as a whole, offering some refreshing insights that would otherwise diffuse across 12 full episodes.

After our opening scene (which I’ll come back to) the film flows an almost rhythmic pace; by halfway through we’ve covered around half of the series, and only on one or two occasions did I feel like I’d been snatched away from a scene before I had a grasp of what the film wanted to say about it. Yet, even at this pace (we’re talking a mere few minutes for each episode), the movie manages to revisit some of the most endearing moments of Rikka and Yūta’s relationship, reminding us of the charming innocence with which this friendship became something more.

Nibutani, Dekomori and Kumin all get their space to shine in this movie too, which does a great job of shining a spotlight of some of their most loveable traits. It also takes the time to touch upon some of their own particular stories; the Mabenogion, Nibutani’s past as Mori Summer, and the cat episode all get a reference. However, these are fleeting, and the majority of the scenes with the trio are reserved to the ones they share with either Yūta or Rikka. As you may expect, this is because of the time restriction. KyoAni are clearly aware of this, though, and do give us a bit of a concession. There’s a really tasteful montage almost half-way through the film, which reels through some of the trio’s individual highlights from across the series. It’s a really sweet moment that brings a really welcome air of nostalgia to the film. Nevertheless, I can’t help but feel that some of these moments should have made it into the movie, however brief they might have been. I think, for example, that Dekomori‘s distress at losing the club (and by extension Rikka) in Episode 11, and her consequent confiding of Rikka’s deeper feelings to Yūta, add a lot to that profound story that I mentioned earlier. Unfortunately, it doesn’t get more than a fleeting visual reference in this montage.

To use a more relevant example, I wish they had included a few more scenes of Rikka’s rejection of her chunibyo and the part her mother played in it. We do get to briefly see Rikka struggling to be ‘normal,’ but it’s a scene lacking context, and so it loses a lot of its original potency. Rikka’s song in the festival also seems to be oddly absent; it marks a significant turning point in the series, and frames Rikka’s chunibyo in the context of the deep emotional loss she feels towards her father. However, it seems even that moment found its way to the cutting-room floor.

Now I mention these not to criticise KyoAni as such, but to simply suggest how I might structure the film differently were I in their shoes. In truth, I can’t criticise them - and the reason is because of that character montage I mentioned earlier and what it represents. As well as highlighting some of the cast’s ups and downs, it also serves to showcase plot lines the movie doesn’t have time to delve into. It’s both a montage and a statement from the studio, one with a simple message; “we know we can’t cover all this material, but you know where you can watch it if you want to”. Just as it’s a exceptionally competent revisiting of the first series, the movie is also a bit of an advert for its predecessor. The two are not competing, and they’re not an ‘either/or’. Rather, they’re an entree and main-meal version of the same story, able to cater to your appetite at whatever time you decide to revisit the show.

I’ve already mentioned how this movie offers something fresh by presenting that more intense gaze on certain scenes. But there is a fair bit of original content in this movie too. In fact, it kicks off with a bombastic wedding dream from Rikka, as visually spectacular and full of energy as we could hope for. Kyoto are clearly aware that some people will have reservations about buying a recap movie, and have dumped a bucket load of cherries on the cake to entice them.

We also get some more original animation in the form of the setting for the recap, which is just between the first and second series. I won’t say too much on either for risk of spoiling them, but I think the latter bookmark scene does great job of capturing the dynamic relationships between all the main characters in a single moment. As such, it leaves you refreshed and ready to dive straight into the new film. That being said, there’s also a really nice after-credits scene that sets us up perfectly for series two, although I fully expect a movie option of that will also present itself at some point in the future.

Despite my slightly pedantic comments on how I would have done things differently, Love, Chunibyo & Other Delusions!: Rikka Version is a delightful retelling of the first series, condensing all its charm and energy into an accessible 90-minutes. More so, the movie actually succeeds in intensifying moments from the show. It gives scenes a greater emphasis in the overall story, offering new perspectives, and does so in a way that was naturally weaker in its predecessor by virtue of its episodic format. That being said, whilst I did finish the film with a newfound appreciation of the colourful cast and story, it also left me with a hunger to revisit the first series too. Like flicking through a holiday video album, this film reminded me of how much I wanted to go back to experience everything all over again. In that sense, it serves as a perfect companion piece to the series, and I heartily recommend it to you should you be looking to reject reality again for a couple of hours.

7
Love, Chunibyo & Other Delusions!: Rikka Version is a delightful retelling of the first series, condensing all its charm and energy into an accessible 90-minutes.