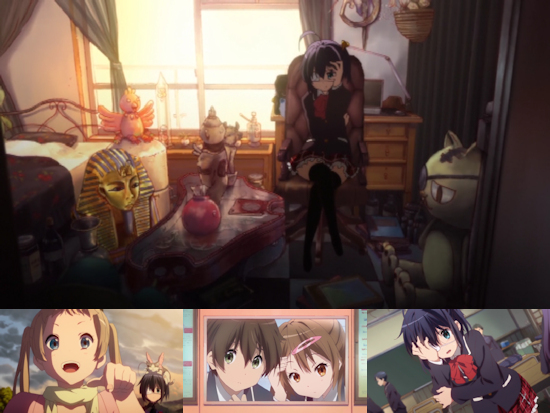 We all have embarrassing aspects of our past - and our childhood in particular - that we'd like to bury and remain hidden forevermore. It's a situation which is all the more problematic in our modern age of social media, where each and every one of our mistakes are shared to our friends in real-time, and stored irrevocably forever online.

For Yuta Togashi however, the problem is a more immediate one. For some years, Yuta was a "chunibyo" - a boy with delusions of grandeur, imagining himself as the "Dark Flame Master" at the centre of a world of magic, mystery and conspiracy which he embraced whole-heartedly by talking in indecipherable riddles to all and sundry, wearing black and lugging a huge sword around everywhere with him. Having awoken to the folly of his behaviour, Yuta wants to make a clean break from his shameful past and has thus chosen to attend a high school far away from his former classmates and any knowledge of his chunibyo days - however, the past has a funny way of coming back to haunt you regardless of how thoroughly you try to escape.

In this particular case, the spectre of chunibyo continues to loom large in the form of one of Yuta's new classmates - Rikka, a girl irredeemably mired in her own fantasy world as the holder of the "Wicked Lord Shingan", as demonstrated by her wearing bandages and an eye patch at all times. For some reason Rikka seems determined to hang out with Yuta, rather spoiling his hopes for an idyllic high school life, and before he knows it he's embroiled in a club with a growing number of oddballs to shatter any hopes of normality for our unfortunate protagonist. Heck, even the beautiful Shinka Nibutani is far from the perfect student council president she initially seems to be...

In many ways, Love, Chunibyo & Other Delusions is a series of two halves. The show begins as a simple but effective comedy, packed with slapstick and witty one-liners as Yuta tries to avoid the fate of being branded a weirdo at high school, only to be stymied at every turn by Rikka dragging him into her melodramatic and frequently silly chunibyo world. As Rikka's friend Dekomori invites herself into a circle of uneasy friendships including the aforementioned Nibutani (who herself has a past she wishes to hide), so the opportunities for chaos and embarrassment grow exponentially.

However, as with most things there is a method to Rikka's madness - her delusions are not simply the product of an over-active mind but a genuine attempt to either run from or process some upsetting truths in her personal life. This is brought into focus in tremendous fashion, as a trip to Rikka's grandparents that sees her friends tag along gives Yuta - and us - a full view of why she is the way that she is, in turn giving him pause for thought as to whether her particular case of chunibyo is a detrimental force upon her life or a necessary coping mechanism for a traumatised young girl.

This shifts the show in a different direction - still packed with comedy and wit, to be clear, but also a dramatic and emotional piece which is part love story and part consideration of whether escaping from reality is always such a bad thing. The result of this second half of the series is impressively even-handed, suggesting that a world devoid of fantasy and play is an exhaustingly mundane one, while conceding that indulging in nothing but fantasy is damaging. It's an impressive turn of events that works tremendously well and kicks in at the exact point where the show's pure comedy is running out of road - at times it's endearingly sweet, and at other it brims painfully with emotion as friendships are tested almost to breaking point by events.

As someone who has previously been rather dismissive of the overall quality of this show narratively when it initially aired, I have to hold my hand up here and admit to being wrong in my initial evaluation of Love, Chunibyo & Other Delusions. Yes, some of its slapstick comedy is laid on a little too thick which blunts its potency, but taken as a whole and watching en masse rather than week by week, the series holds up excellently both as it entertains in its first half and tugs at the heartstrings for the second. It's the kind of work production studio Kyoto Animation often prove so adept at handling, knowing just how to evoke tears or laughter in equal measure.

Given the studio at the helm, it's also no huge revelation to say that this is a gorgeous looking series - vibrant and colourful with lots of attractive character designs, and simply stunning when it drops into its action scenes which see the cast fighting through the lens of their fully-realised chunibyo delusions to provide easily the most visually striking (albeit often brief) elements of the show. Sadly, we only got to check out the series via its DVD release, which is competent but certainly not the best way to enjoy it given the quality of its animation, and indeed those action scenes are the one place where the DVD format struggles to keep up with the unfolding events on screen.

Speaking of such matters, we should also point out that the DVD release suffers slightly in terms of audio quality too - the NTSC to PAL conversion process has introduced some noticeable "warble" to the sound which is particularly pronounced during background music, although thankfully doesn't impinge upon dialogue too much that we noticed. It's another addition to the list of reasons why Blu-ray is the way to go here, although this is an issue which should have been avoided regardless via a more careful NTSC to PAL conversion, or indeed by leaving that process alone and releasing the series in NTSC regardless as per some other recent Animatsu Entertainment releases.

If you're intending on watching the series with its English dub, the good news is that it's pretty decent. There are some odd casting choices to be found - Rikka sounds like a thirty-something rather than a high school girl (which in its own way makes the show's comedy angle all the funnier) whereas Dekomori's voice seems better suited to Rikka's character and vice versa - and some lines could have done with a second bite at recording to give them a little more oomph, but as a whole the show is just as entertaining with the English cast in place. Meanwhile, the English language subtitle track is excellent - a couple of minor errors aside it does the job well whilst also providing a few translation notes (even if a couple of them are needless shoulder shrugs at lines of dialogue that weren't meant to refer to anything specific in the first place).

Having come to rewatch this series from a point of cynicism born out of previous experiences with the franchise, viewing Love, Chunibyo & Other Delusions for a second time with fresh eyes was an eye-opening experience for me personally - watching the series in bulk smooths out a lot of its kinks and provides a fun, engaging and occasionally tear-jerking experience that juggles its comedy and drama well while also bringing some romance into the mix without turning the whole thing into a saccharine mess. Some of its comedy misses the mark and some of its drama is perhaps a little heavy-handed, but as a whole this is an able demonstration of the kind of work that KyoAni does at their best - taking some decent source material and mining it for every drop of compelling content that it can provide, all wrapped up in a visually beautiful package. Why did I previously think otherwise? Perhaps I was simply delusional...

8
Good comedy leads into great drama from a gorgeous-looking series that makes full use of every aspect of its story.
COMMENT AND DISCUSS
blog comments powered by Disqus