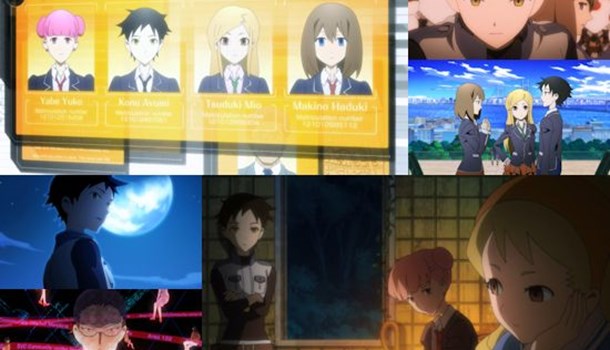 It isn't hard to imagine a future three decades from now where face-to-face communication has become increasingly more infrequent; where even school teachers never come into direct contact with their pupils, and when those pupils rarely interact with one another. It's also easy to envisage a future where security cameras and monitoring systems watch silently over our every move, recording and relaying what we're doing in the name of our own supposed security.

These are just two of the facets of the world of Loups=Garous - a world of constant surveillance, a distinct lack of face-to-face communication, and (perhaps on a brighter note) the solution of the problem of world hunger. We come into this potentially dystopian world via Hazuki Makino, an anti-social girl with a "communication disorder" - that is, she struggles to talk to others away from doing so via electronic means.

Despite preferring to view her life through a lens, Makino finds herself thrust towards making some bona fide friends by the outgoing Mio Tsuzuki, who is determined to replicate an old pop band who she idolises (cue tie ins to real-life, all-girl J-Pop group Scandal) and needs friends to do so. However, Tsuzuki is also a rather deft hacker (or "magician", as she prefers) with an inherent hatred of the world's monitoring systems, which leads Makino, Tsuzuki and some of their other classmates into the heart of a tale of kidnappings and serial killings which leads right to the heart of the world's systems.

There's no particularly polite way of building up to this, so I'm going to say it straight - Loups=Garous is a meandering, garbled bunch of nonsense. The entire movie seems to suffer from some kind of attention deficit disorder as it leaps from one focus to the next - first it's a study of the impact of a surveillance society upon its characters, then it's a murder-mystery or crime drama, then it's a tale of friendship, then one of conspiracy, then one of the supernatural. These are all elements that could have made for a strong narrative in isolation, but when you try to cram all of them into a little over ninety minutes the result feels a bit like that game where you write a page of the story, then let someone entirely different write the next page without reading what you wrote.

Perhaps the real denouement of what ails the film is one of its big final reveals, which left me laughing so hard I had to pause the movie for a few seconds to recover - it's a moment which is clearly supposed to be taken seriously, but its framed and delivered in such a ludicrously nonchalant way that it becomes unintentionally hilarious. It's the ultimate evidence that here is a story that has bitten off far more than it could ever possibly chew.

I'd like to say that the film is at least worth watching for its animation quality, but... it isn't. The movie is heavily stylised, certainly, but the whole thing looks flat and too overly-simplistic to be eye-catching. The only exception to this is a couple of the film's rare set pieces, which are fluid and well-realised and offer up some of the few scenes that actually stick in your mind come the end of it all.

Speaking of flat delivery, the English dub of Loups=Garous is akin to some kind of aural pancake; a lifeless husk that feels like it was recorded after a succession of long, sleepless nights. In contrast, the Japanese dub has far more life and energy when the film requires it, and is definitely the preferential treatment in this case. Still, at least this UK release of Loup=Garous doesn't skim on the extras, featuring a plethora of trailers, music videos, interviews and even a pilot version of the film (which ironically works far better than the full-length feature despite its brief running time).

Having looked forward to finally seeing this film, it's a real shame to see so many good ideas go to waste, a little like pouring all of your favourite foods into a single pie and wondering why it tastes of awful. So few and far between are the redeeming moments of Loups=Garous that it's tough to pick out much in the way of highlights - when the film is coherent it's dull, and when it picks up the pace it's a confused mess. Put simply - Loup=Garous equals a film to be missed.

English and Japanese stereo audio with English subtitles.  That aside, the release is packed with extras, including promo videos, a movie digest feature, music videos, pilot film and a number of interviews, including one with featured pop group Scandal.